Latest News
Home /Reminder: When the Very Very Rich Are Done With Us, They Plan to Leave Us Behind

Yves here. One of the many things I had wanted to do but never got done was an idea a few years back of a movie called “Point of Failure”. Three interlocking plots about super rich guys decamping to their foreign secure compounds when they decide the time has come for them and their families to go. And of course their plans wind up going awry (the one who looks to have gotten away cleanly then has a family member develop a serious medical problem that can’t be treated at his bolthole).

BTW, one vulnerability that these squillionaires obsess over is the private jet pilots. How do they make sure they’ll transport them, as opposed to dump them out and fly themselves and their families over? And I don’t see why, if I were a private jet pilot, that I’d trust them one iota. Once you’ve shuttled them over, your use to them is done. I’d expect to be shot stepping off the plane. 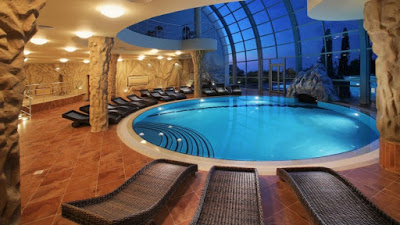 The spa in the Europa One compound in Germany. Europa One spans 76 acres and has 228,000 square feet of living area — one of the many “safe spaces with amenities” being built for the rich, tailored to these Coronavirus times, according to the LA Times

For them, the future of technology is really about just one thing: escape.

This is your periodic reminder that:

• After the predatory rich have extracted all the wealth they can from those of us who work to sustain their luxuries;

• After they’ve raped and despoiled the fruits of earth, turned most of it to muck, so that only the places they inhabit are habitable;

• After the chaotic wars, famines and droughts; after the cross-border conflicts and drone strikes on dangerous refugee camps to thin the herd, inflicted by those with power to stem the angry tide of those without it;

• After all the pandemics and diseases have taken their toll;

• After the world has started to go wild again, a riot of weeds in our ancient agricultural garden;

After all that, the predatory wealthy will abandon us, create a place that nurtures only themselves — they and the professional classes they can’t live without — and live there forever, leaving the wreck they left behind to us.

Last year, I got invited to a super-deluxe private resort to deliver a keynote speech to what I assumed would be a hundred or so investment bankers. It was by far the largest fee I had ever been offered for a talk — about half my annual professor’s salary — all to deliver some insight on the subject of “the future of technology.”

I’ve never liked talking about the future. The Q&A sessions always end up more like parlor games, where I’m asked to opine on the latest technology buzzwords as if they were ticker symbols for potential investments: blockchain, 3D printing, CRISPR. The audiences are rarely interested in learning about these technologies or their potential impacts beyond the binary choice of whether or not to invest in them. But money talks, so I took the gig.

After I arrived, I was ushered into what I thought was the green room. But instead of being wired with a microphone or taken to a stage, I just sat there at a plain round table as my audience was brought to me: five super-wealthy guys — yes, all men — from the upper echelon of the hedge fund world. After a bit of small talk, I realized they had no interest in the information I had prepared about the future of technology. They had come with questions of their own.

They started out innocuously enough. Ethereum or bitcoin? Is quantum computing a real thing? Slowly but surely, however, they edged into their real topics of concern.

And what were their “real topics of concern”? How to abandon the broken world they made and leave us in the dust.

Which region will be less impacted by the coming climate crisis: New Zealand or Alaska? Is Google really building Ray Kurzweil a home for his brain, and will his consciousness live through the transition, or will it die and be reborn as a whole new one? Finally, the CEO of a brokerage house explained that he had nearly completed building his own underground bunker system and asked, “How do I maintain authority over my security force after the event?”

The Event. That was their euphemism for the environmental collapse, social unrest, nuclear explosion, unstoppable virus, or Mr. Robot hack that takes everything down.

This single question occupied us for the rest of the hour. They knew armed guards would be required to protect their compounds from the angry mobs. But how would they pay the guards once money was worthless? What would stop the guards from choosing their own leader? The billionaires considered using special combination locks on the food supply that only they knew. Or making guards wear disciplinary collars of some kind in return for their survival. Or maybe building robots to serve as guards and workers — if that technology could be developed in time.

It took the author a while to get it, but he finally did:

Despite its starkness, there’s too much forgiveness in this piece. “For all their wealth and power, they don’t believe they can affect the future.” Not true. They’re the ones who created it.

If you think all this is speculative, consider the Covid-era luxury bunkers the wealthy are already building to “self-isolate” in comfort.

Be warned. Asking to not be prey won’t work all, and it never has. Trying to “move the corporatists to the left” is an exercise that only ends in failure — or co-dependency.

In a democracy, as fanciful as the term may be when applied to the United States — in a democracy that doesn’t survive, like Mubarak’s Egypt did, by parking tanks on street corners, the wealthy are kept in place by the people alone. They really can be removed if the people want to remove them.

Whether the process is orderly, though, depends on the Left. We already know what rebellion from the Right looks like. It looks like Trump.