Latest News
Home /How Much Has the World Changed? (Not much) 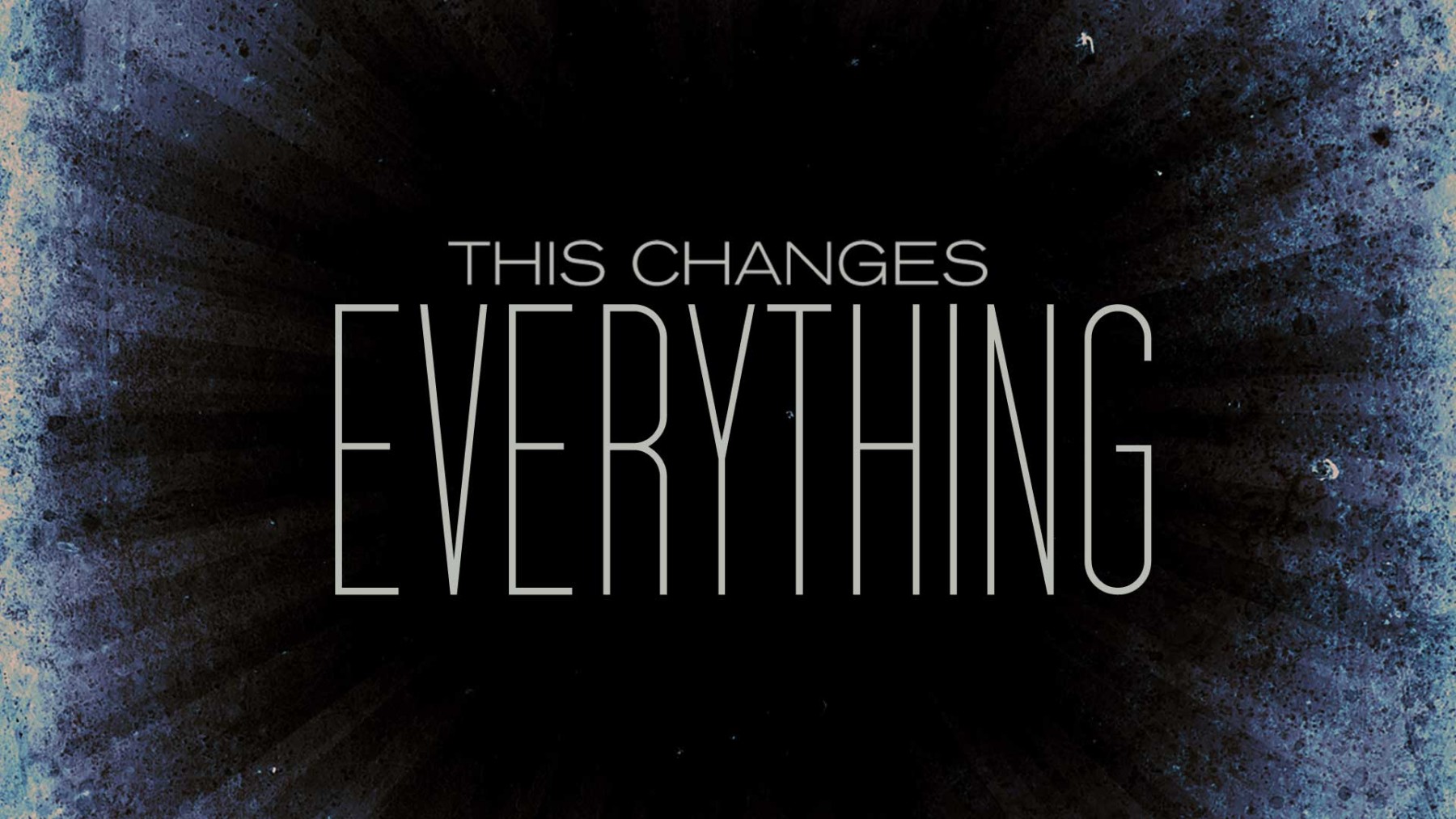 That declaration should always be greeted with extreme skepticism. Your daily sheltering-in-place experiences are definitely different from what you previously thought of as your “normal” life. But what you should expect to experience post-pandemic will look remarkably similar to what it was like pre-lockdown — only with more hand washing.

This will be especially true once there is a treatment and vaccine for Covid-19. The biggest change will be the rapid acceleration of trends that were already in place. The future is coming, just a little quicker than previously scheduled. Huge events can have that effect.

That does not stop the prophesies of doom. Radical expectations by futurists include:

Death of big Cities;
Collapse of Colleges;
and Public Schools;
End of Retail Stores;
and Malls;
No more offices space;

Massive change is coming to:

As you emerge blinking into the sunlight of the brave new world that awaits, you will hardly recognize anything you see! Nothing will be familiar in this post-pandemic world. For those of you who believe inconceivable changes await, I offer you for sale at a reasonable price, this bridge connecting lower Manhattan to Brooklyn.

My skepticism of radical change is based on three simple premises of human nature:

1. Past claims of “change” failed to pan out. The September 11th terrorist attacks1 and the 2008-09 financial crisis — both of which “changed everything,” mostly mean-reverted eventually back to prior life. The big changes were mostly modest adjustments.

2. Incremental change is more likely. What changed was the excess bank leverage ratios reverted back to where they were decades earlier. Larger financial institutions today maintain more capital and have better risk management tools. Even the Dodd–Frank Wall Street Reform bill was eventually whittled away by lobbyists, and many of its key provisions were eliminated or scaled back dramatically.2

3. We lack the imagination to recognize genuine change: We build internal models at great personal cost. Even when confronted with overwhelming evidence to the contrary, we are still loath to alter these models. When things that actually do change everything occur, we still overlook them: The Wright brothers maiden flight at Kitty Hawk was hardly even noticed by anyone.3 Powered human flight is one of those things that did change everything — and we completely missed it.

Post-pandemic, some pre-existing trends might be easier to spot. With 93% of Americans sheltering in place for months, some trends that are not novel or new will have been given a boost by circumstances. Consider these questionable forecasts:

The Death of Cities: Larger, expensive urban areas like New York, San Francisco and Chicago have been seeing a 1% population decreases for years. Some expect this to accelerate, especially as younger residents who cannot afford to live in expensive cities go elsewhere.4

But it is not a mere coincidence that Cities have been the dominant source of economic growth, cultural creativity, and business energy for the past 5 centuries. That trend exists because social and intellectual capital of cities is so highly attractive. Anyone who spends much of their week on Zoom calls knows this will not change anytime soon.

Collapse of colleges: Tuition costs have been consistently rising faster than inflation for decades. There is much to be said for the college experience, and it is hard to see parents paying $70k per year for the lesser online version of that. (Note online colleges and academies have been around for more than a decade, the uptake has been rather slow).

A University degree is no longer the guarantee of higher lifetime income that it once was. The movement towards free community college and the economic stress third tier schools have been having both pre-date the pandemic. All three of these prior trends will likely continue or even accelerate.

No More Offices? Consider the tech that we are using today in lockdown: Facetime videos, Screenshare, Skype calls, Google Hangouts, Zoom. All predate the Coronavirus by years or decades. The technology has improved, mostly because of increased scale and greater bandwidth. I was surprised on a Zoom call to learn how few people knew this was all pre-lockdown tech. And not just the “OK, Boomer” crowd.

The outsourcing of workers to cheaper economic regions is forever old; Remote work has also been around almost as long.5 You can see this in how differing Real Estate Investment Trusts (REITs) performance has been reflecting the changing commercial and residential real estate demand for quite a while.6

End of retail stores (and malls): Truly, the longest trend of them all. Amazon went public in 1997, and immediately began taking market share. The rest of the internet soon joined in, and have been growing at a 30% annual rate. Online retailers now account for about 15% of sales.7

But stores like Target, Walmart, and Home Depot have (finally) gotten better at competing with Amazon. But its more than just the biggest online store: America has been over-retailed for decades. America has had way too much physical retail space on a per capita basis since the 1990s.8

Suburbia: The American dream: owning your own home, with a backyard and some nature was never more attractive than during lockdown. Private investments in rent-to-own space and single-family homes will do well. Sounds great when you are staring at the same four apartment walls and your elevators and lobby are a viral war zone. Once a treatment and vaccine exist, this too shall pass.

Humans have a well-documented capacity to adapt to both good and bad. This is why your big new television eventually becomes just “the TV,” or why that fancy, all-wheel drive, twin turbo, mid-engine V-10 racer eventually is just “the car.”9 Without this adaption capacity, we would be crippled by both despair and joy.

Lots will change, but they were already changing before the Coronavirus. Assume those trends will accelerate.

Just don’t pretend these are anything new…

1. A White House that wanted a war misled the public about it – nothing new there.

2. Even the Consumer Finance Protection Board (CFPB) was neutered; Blame Mick Mulvaney.

3. Adding a 4th class of airline seat, however, not so much. George Carlin would have noted that “Premium Economy,” like Jumbo Shrimp, is a contradiction in terms.

4. Many will go to Sunbelt cities like Atlanta, Austin, Charlotte, Phoenix, Richmond, Tampa Bay, etc. But thanks to nicer weather and lower taxes – both of which existed pre-Covid19 – they have been experiencing population gains for decades.

5. My own firm launched in 2013 and was built for the cloud from day one. We set up remote offices in 12 cities and it has worked quite well. We increased our company wide Zoom calls from once to 2X a week to keep everyone in touch. But its all based on tech we have been using for years.

6. Compare the performance of REITs specializing in Offices, multi-family apartments building, and retail space versus those that specialize in Warehouses, data centers, and storage.

Investment Performance by Property Sector and Subsector (Updated: May 31, 2020) 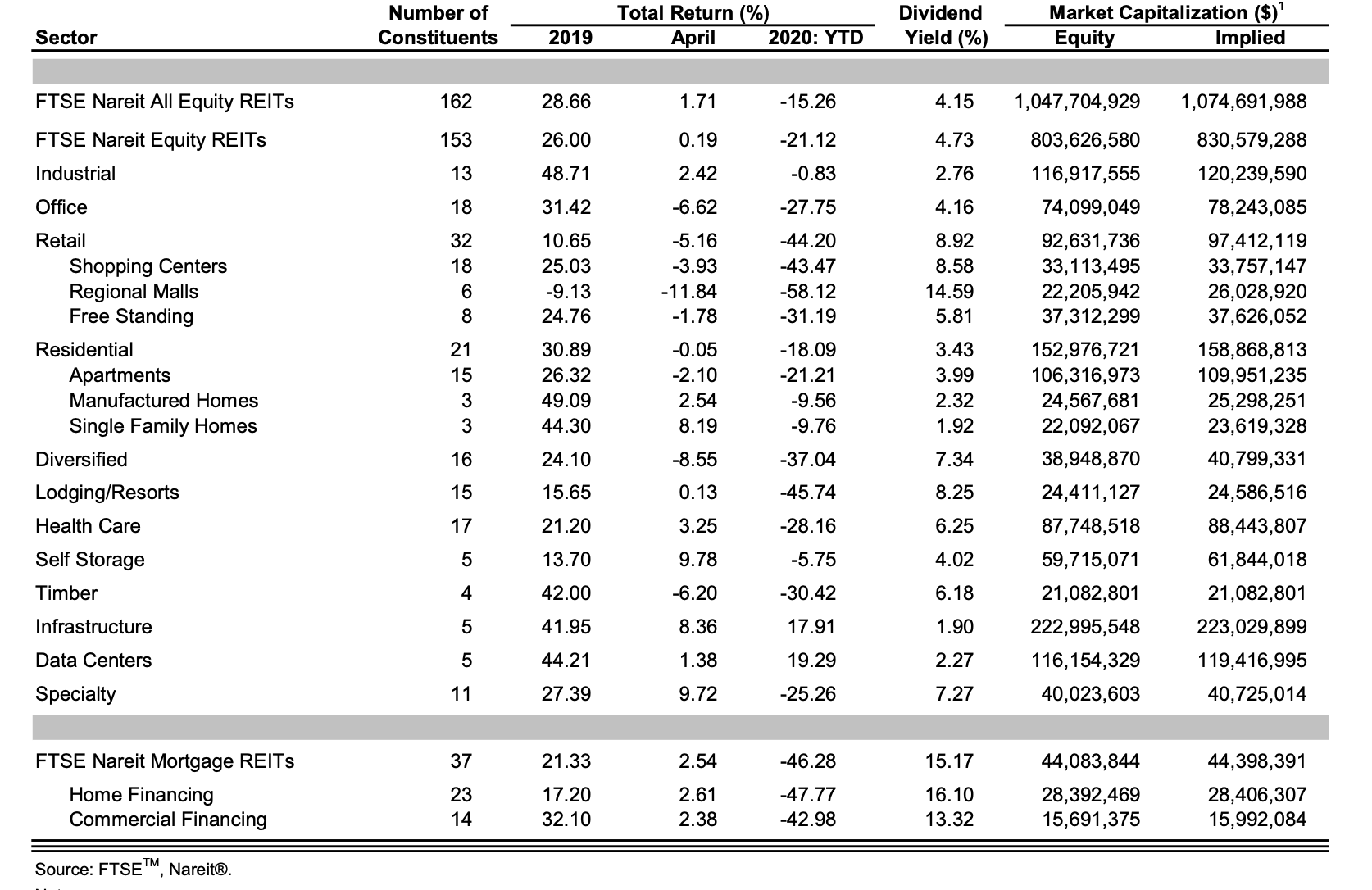 8. I noted in 2009 the problem of the United States as “overstored” in Downsizing America. Retailer stores and their problems are a very old issue.

9. Not for me, but for most people. I like my front engine twin turbos big and loud, and my mid-engine naturally aspirated engines well balanced (and loud).