Lambert highlighted the arrest of Ohio House Speaker Larry Householder, a Republican, and four associates in a Federal indictment on charges involving over $60 million in racketeering, bribery, and money laundering, making it the biggest political corruption prosecution in Ohio history. We’re highlighting this case partly to offer a break from Covid-19 coverage, but also as a window into the ugly side of American politics. It also offers stark proof of political scientist Tom Ferguson’s “Golden Rule” theory of politics, that it is moneyed interests that drive legislation and regulations.

Needless to say, this is one of those rare occasions where powerful individuals engaged in bad conduct are being held to account. Each of the defendants could spend as long as 20 years in prison. Although one robin does not make a spring, the unsealing of the Householder filing follows New York kingmaker Sheldon Silver has been sentenced to 78 months in prison…although oddly his term doesn’t start for another month.

We’ve embedded the filing below. The short version is that Householder and his four lobbyist/operative allies took payments from FirstEnergy Corp to get House Bill 6 passed and defend it against a ballot initiative. House Bill 6 provided for a $1.3 billion bailout of zero carbon energy producers…with nearly all the money going to keep two of FirstEnergy’s nuclear plants from going bankrupt.

$60 million might seem an awful lot to get a bill passed. In fact, over $2 million was still left in the coffers of Generation Now, the main slush vehicle secretly controlled by Householder, set up as a not-for-profit so as to avoid pesky PAC disclosure requirements. $1 million went into the personal brokerage account of one of the defendants, political strategist Jeff Longstreth. Over $500,000 allegedly went to Householder, for campaign expenses, fix-ups to his Florida house, and to pay off credit card debt. And all those lobbying fees too!

Nevertheless, the filing describes a long campaign, first to fund Republican primary candidates for House seats who understood they were expected to back Householder as Speaker (Householder had lost to a termed-out departing Speaker who’d named a successor) and then to support their campaigns in the general election. For instance, the indictment describes how Householder’s team estimated that it would take $2.5 to $3 million to win the primary battles; FirstEnergy obligingly ponied up over $2 million by the date of the primary and Generation Now spent $1.8 million, including $90,000 on Householder’s bid.

The day Householder was sworn in as Speaker, he vowed to establish a subcommittee on power generation. Three months later, junior representatives he’d helped get elected introduced HB6. Note that similar legislation had failed in 2017. More money was deployed, first to pass the bill in the House, then the Senate, then to beat back the ballot initiative seeking to overturn the legislation.

The indictment has lots of gory elements: numerous schedules of payments to show timelines, texts between the principals, quotes from conversations with legislators. The indictment consists almost entirely of the affidavit of the lead FBI investigator, Blane Wetzel. The details also show that the FBI was investigating Householder and his allies as they were moving the bill through the legislative process. For instance, the document repeatedly mentions recorded conversations, suggesting the FBI had warrants issued early on. That suggests that some Representatives and/or employees of FirstEnergy had a sense something crooked was afoot and acted as whistleblowers.

The document is full of juicy tidbits, like when Wetzel interviewed Representative 7 the day HB6 went to the Rules and Regulations Committee, chaired by Householder:

“Clark” is Neil Clark, a lobbyist, “one of Householder’s closest advisors,” and one of the defendants. Representative 7 viewed it as “unusual and odd” that Clark rather than a House aide had been tasked by Householder to work with a this representative on a different bill but he and Clark had nevertheless become friendly: 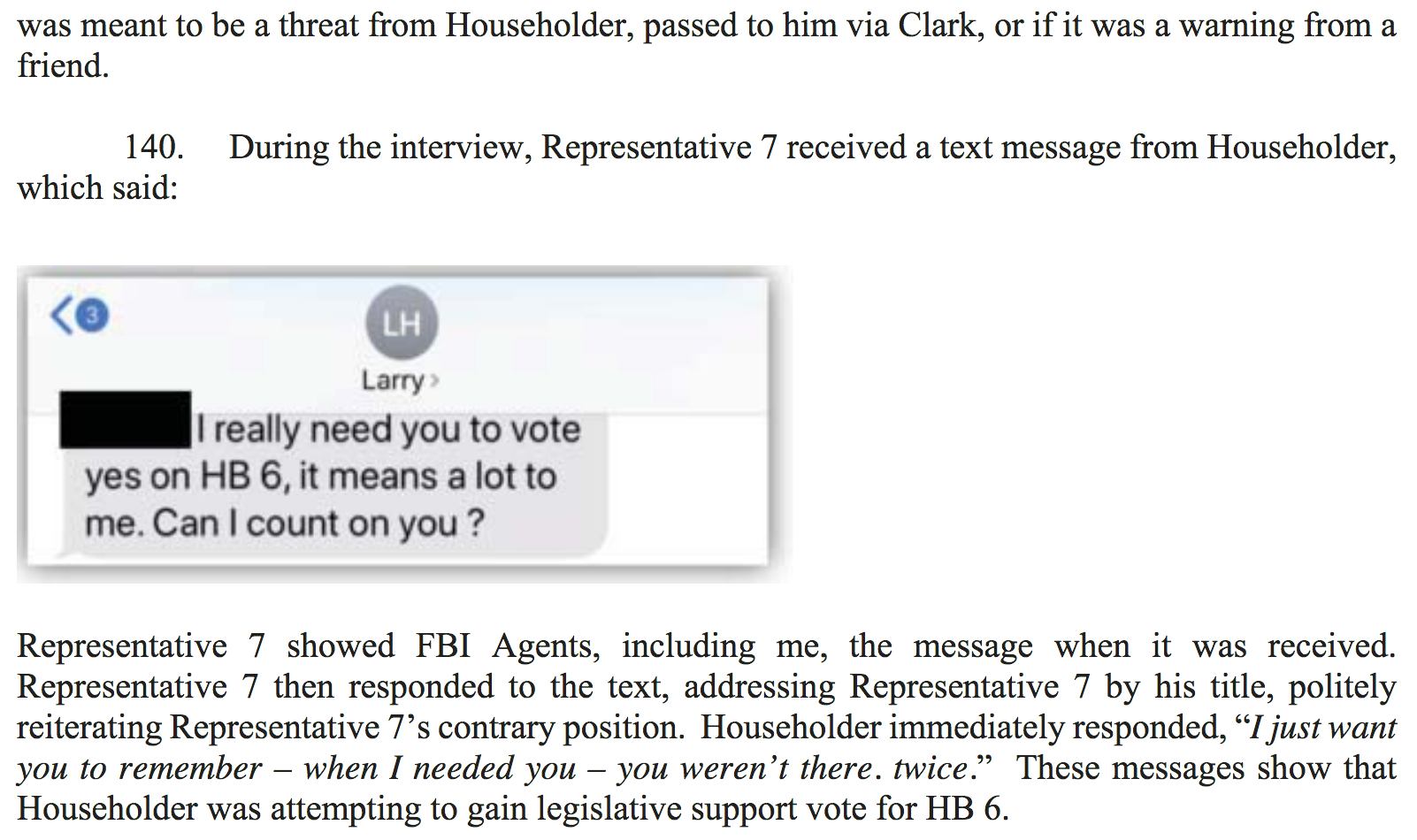 More gory details include the successful campaign to beat back the ballot initiative, which including hiring 15 signature-gathering firms to conflict them out, and depicting the initiative as a Chinese plot. From a mailer: 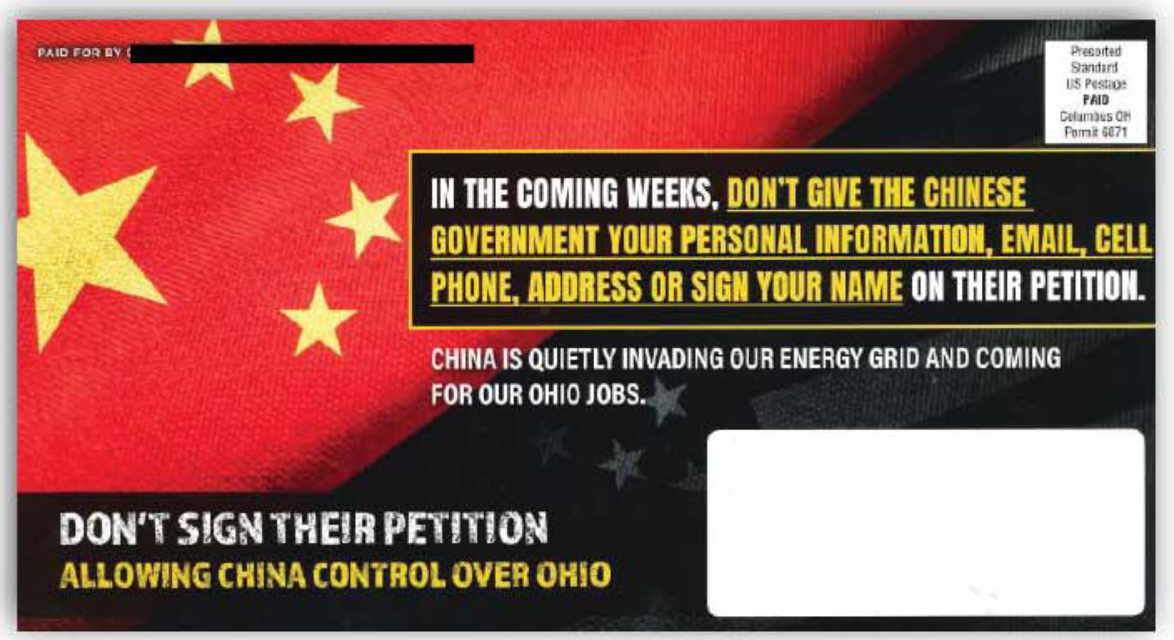 The indictment also discusses the close coordination between EnergyFirst (Company A) and the Householder group (called the Enterprise in the filing), such as the timing and amount of money demands, as well as:

One wonders when these EnergyFirst officers will be indicted…or is the plan to offer them immunity to testify against Householder and his four fellow defendants? It would seem the Feds at most only one knowledgeable executive to perfect its case. The VP of External Affairs ought to do.

A compelling section comes late in the affidavit, when the Householder group is tearing its hair because they aren’t able to get good numbers on how many signatures the ballot initiative is gathers. So one of the defendants, Matthew Borges, tried to bribe one of members of the ballot campaign to provide the information. At this point, the FBI apparently had such heavy surveillance of defendants that Agent Wetzel was able to encourage the prospective bribe recipient to turn down the payoff. The target provided texts of the exchange.

The FBI then asked Wetzel to tell the target to express interest in receiving the bribe. After some phone calls and texts, he met with Borges, wearing a wire. The target took a check and continued to provide information of the additional communications. The “Enterprise” also got straws to offer $2500 plus plane fare to signature collectors to quit. This full-court press worked. The proponents were unable to collect the 1000 signatures needed to get the initiative on the ballot.

And this merry band of looters had new worlds they planned to conquer: 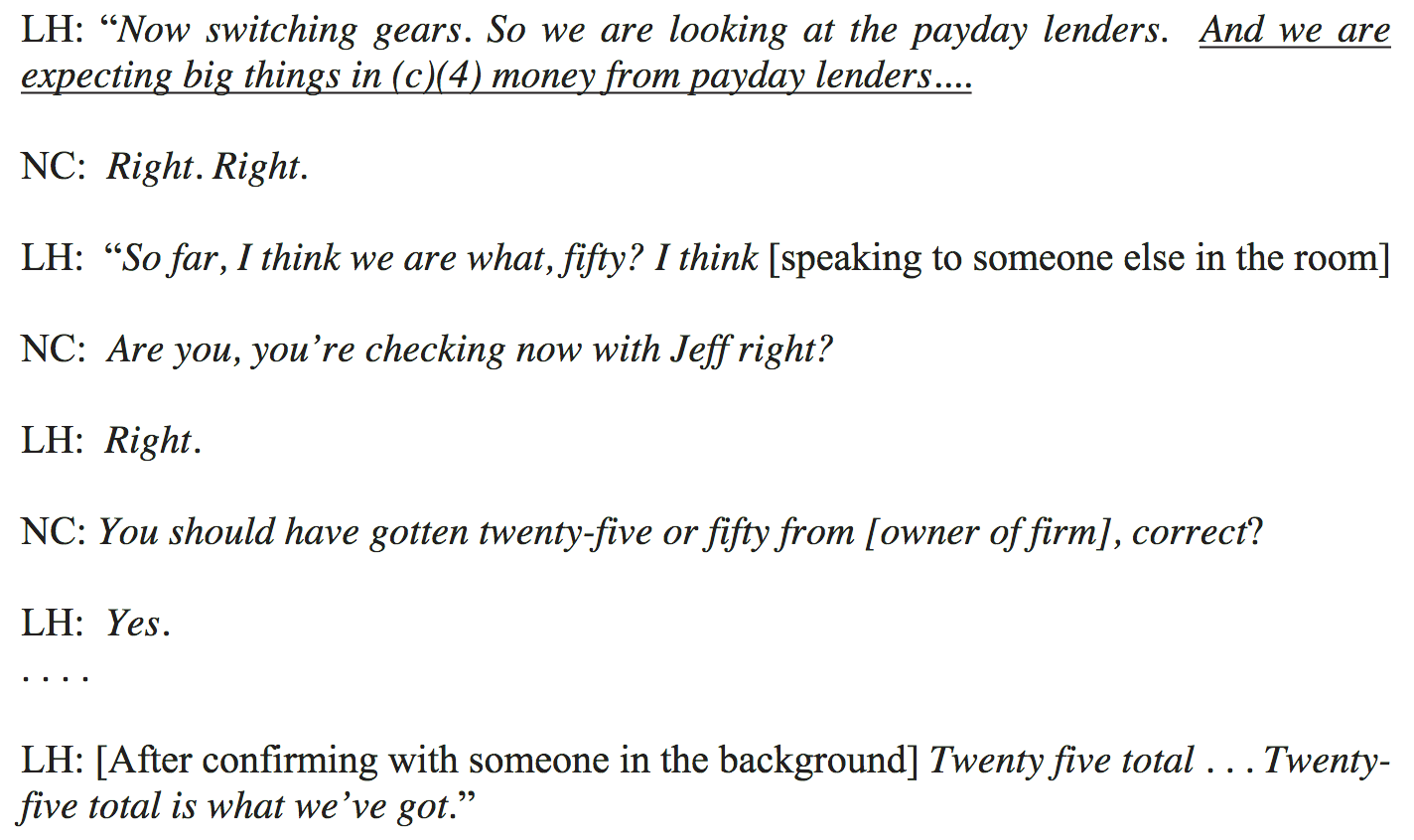 If you read or even skim the indictment which I strongly urge you to do (it’s an impressive piece of work), you might notice how much effort is devoted to describing how the defendants worked together. That appears critical to the racketeering charges:

My layperson understanding is that prosecutors don’t often file racketeering claims even when they might seem to fit because they are harder to prove than garden variety frauds. The penalties for racketeering typically include civil forfeiture of the ill-gotten gains. I hope knowledgeable parties will pipe up, but one motivation here, aside from the behaviors sure looking like classic racketeering, is that I would assume that the prosecutors could seek an order that assets that are arguably racketeering proceeds be frozen. That matters here because Generation Now has over $2 million in its accounts and the various lobbyists look easily to have pulled out millions in fees. Those funds could be dissipated in mounting a legal defense. No point in letting EnergyFirst’s money be used twice for bad ends if that can be forestalled.

However, it does not seem likely that the definition of “Enterprise” as in the racketeering organization, will be amended in subsequent filings to include EnergyFirst. Companies are almost never indicted because it is usually a death sentence for the business. That’s disappointing, since Ohio taxpayers are out $1.3 billion that it would be nice to claw back.

Or will the legislature simply rescind HR6? The language of in the Cincinnati Enquirer suggests that most of the funds have yet to be paid: “The bailout is expected to cost the state’s utility ratepayers $1 billion.” If that’s the case, the bill will have become too toxic to Team R for them not to do everything they can to limit the damage with elections mere months away. If so, the FBI would have done vastly more good than just taking down a particularly dirty pol.