If the president gets his way, Judy Shelton will bring crackpot goldbuggery back to the central bank.

This week, the Senate is expected to take up the nomination of Judy Shelton to be a member of the Federal Reserve Board. She is widely considered to be a monetary crank due to her past support for a gold standard. Placing Shelton on the Fed’s governing board would be like a university giving tenure to an alchemist in its chemistry department or an astrologist in its astronomy department. Even the free market economist Milton Friedman would oppose Shelton, since he opposed her promotion to senior fellow at the Hoover Institution in the ’90s for having indefensible monetary views.

The principal case for a gold standard is that it prevents inflation. In reality, it doesn’t. What it does in practice is force a deflation following episodes of inflation. So while it’s true that the price level for gold was the same in 1902 as it was in 1834, there were substantial ups and downs, and long periods of deflation that were extremely painful.

Economists generally believe that the gold standard contributed heavily to the severity of the Great Depression by preventing central banks from expanding the money supply to improve the economy. In the wake of the Great Recession, Federal Reserve Board Chairman Ben Bernanke was determined not to make the same mistake twice. His policy of quantitative easing was the key factor preventing the financial sector’s collapse from turning into another Great Depression. Current Fed Chairman Jay Powell has followed a similar policy in handling the downturn triggered by the coronavirus lockdown.

Modern gold standard advocates like Shelton nevertheless argue that the market price of gold is a highly accurate indicator of inflationary pressure in the economy. Therefore, they believe that monetary policy would be improved by tightening when the gold price increases and easing when the gold price falls. Of course, in practice, goldbugs never say that a fall in the gold price means Fed policy is too tight because, in their view, hyperinflation is always right around the corner. The price of gold is very volatile; using it to guide monetary policy would whipsaw the U.S. economy.

Although the gold standard was explicitly rejected by President Reagan’s Council of Economic Advisers in its February 1982 Economic Report, Republicans nevertheless became very animated about returning to a gold standard in 2012, despite the fact that no nation on earth has one. The Republican platform expressed sympathy for it and called for another government commission to investigate the idea—an earlier gold commission in 1981 rejected it. Candidates for the GOP presidential nomination Ron Paul, Newt Gingrich, and Herman Cain explicitly endorsed the gold standard. (Disclosure: I once worked on Paul’s congressional staff.)

Indeed, in the midst of that campaign, Ron Paul took time out to chair a subcommittee hearing on gold. He was concerned about reports that the gold in Fort Knox had been secretly shipped out and sold. Such conspiracy theories have been kicking around for decades in goldbug circles and continue to resonate. I once had a conversation with the late GOP Congressman Phil Crane of Illinois, who was very much a goldbug. He told me that back during the Ford administration, he happened to be near Fort Knox on business and, having some time to spare, thought he would go look at the gold. The guard at the gate told Crane that this was impossible unless he had permission from the secretary of the Treasury. Crane asked to borrow the guard’s phone and called then-Secretary William Simon in Washington. Simon told the guard to let Crane see the gold. But Crane remained suspicious because he could only see inside one vault—apparently there are many vaults with different time-locks for security. He told me he thought it was possible that the vault he saw was the only one with actual gold in it.

In 2012, goldbugs raised questions about whether Germany’s gold stock had been secretly sold off. The Bundesbank dismissed such concerns as complete nonsense. Right-wingers in France and other countries have made similar accusations about their country’s gold. There was a referendum in Switzerland in late 2014, which failed, that would have forced the Swiss National Bank to hold 20 percent of its reserves in gold forever. Citigroup economist William Buiter pointed out that if the central bank was not allowed to sell its gold, ever, then its effective value was zero.

The vast bulk of economists and financial advisers agree that the gold standard is nuts and an extremely poor inflation hedge. Legendary investor Warren Buffett explained a key problem with gold as an investment in a 2012 letter to his company’s shareholders:

Gold … has two significant shortcomings, being neither of much use nor procreative. True, gold has some industrial and decorative utility, but the demand for these purposes is both limited and incapable of soaking up new production. Meanwhile, if you own one ounce of gold for an eternity, you will still own one ounce of gold at its end.

What motivates most gold purchasers is their belief that the ranks of the fearful will grow. During the past decade that belief has proved correct. Beyond that, the rising price has on its own generated additional buying enthusiasm, attracting purchasers who see the rise as validating an investment thesis. As “bandwagon” investors join the party, they create their own truth—for a while.

Over the past 15 years, both Internet stocks and houses have demonstrated the extraordinary excesses that can be created by combining an initially sensible thesis with well-publicized rising prices. In these bubbles, an army of originally skeptical investors succumbed to the “proof” delivered by the markets, and the pool of buyers—for a time—expanded sufficiently to keep the bandwagon rolling. But bubbles blown large enough inevitably pop. And then the old proverb is confirmed once again: “What the wise man does at the beginning, the fool does in the end.”

The essential fact is that if one owns gold bullion, it earns no income, no interest or dividends. Thus gold buyers pay an opportunity cost in the form of interest or dividends that aren’t realized as a result of forgoing the decision to buy stocks or bonds. Of course, gold enthusiasts can invest in gold stocks, which often earn a good return as long as the cost of producing gold remains below the market price—but most goldbugs don’t trust such investments any more than they trust “fiat money” untethered to the value of precious metals. They not only want gold bullion or coins, they also want it physically close to them. As Ron Paul explained, “If you think gold is a hedge, or a protection, you always want it as close to the individual … as possible.”

To convince themselves of their investment savvy despite the evidence that gold is a terrible long-term investment, goldbugs make ridiculous arguments supposedly demonstrating gold’s superiority to all other investments. For example, in late 2014, after a historic run-up in stocks while gold crashed, the conservative journalist Seth Lipsky wrote an editorial explaining that if stocks were valued in gold instead of dollars, then stocks didn’t look so good. This is just rank nonsense. One could just as easily argue for valuing stocks in widgets to prove whatever point one wished to argue.

When confronted with a falling price for gold, goldbugs always slough it off as a temporary downturn and an excellent buying opportunity. Not surprisingly, many of the biggest fearmongers who argue for any given Fed policy as an inevitable spur to hyperinflation are gold dealers like Peter Schiff, who make a lot of money selling gold trinkets to unsophisticated investors. In October 2012, he predicted that gold would hit $5,000 within two years; in October 2014, it was trading at less than one-fourth that amount and is still nowhere near $5,000.

As gold was crashing in 2013, Ron Paul told CNBC that he was still sanguine: “Eventually, if we’re not careful, it will go to infinity, because the dollar will collapse totally.” In 2014, after gold had taken another steep dive, he repeated his belief that gold could go to “infinity” when the dollar tanked.

Even if one takes the idea of a gold standard seriously, there is a key implementation problem that advocates, such as former Fed Chairman Alan Greenspan, have never overcome. You can’t just take the current market price of gold and link to it, because the price of gold itself embodies inflationary expectations. Making the current price of gold the official price would, in other words, lead to actual inflation. But if the price is set too low, then the result will be deflation, a problem Britain experienced when it restored convertibility in the 1920s. In my conversations with gold standard advocates such as Jack Kemp, Jude Wanniski, and Lew Lehrman, finding the right price to fix at—one that is neither inflationary nor deflationary—has been an insoluble problem.

Curiously, conservatives who normally venerate the words of Milton Friedman always ignore what he said about the gold standard. In a neglected 1961 article, he said it was basically a crackpot idea—a critique shared by the overwhelming majority of economists today. Putting Judy Shelton on the seven-member Federal Reserve Board may not have any meaningful effect on policy, but it would give her a prestigious platform from which to advocate a stupid idea that could make the Fed’s job harder during a mounting economic crisis—a moment when speaking with one voice is a crucial source of the Fed’s stability and authority.

Survey of Economists: Should the US return to a Gold Standard 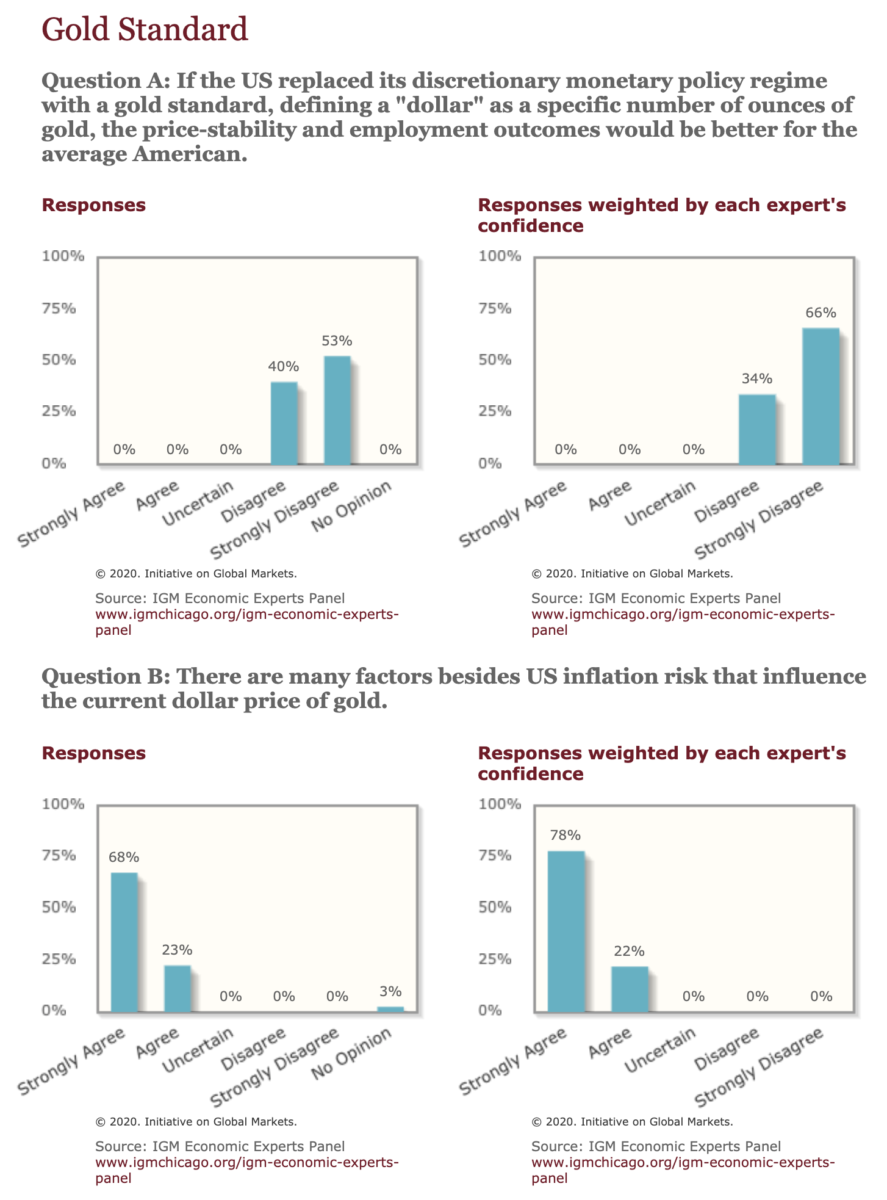