Latest News
Home /Maybe Mr. Market Is Rational After All…

Why Markets Don’t Seem to Care If the Economy Stinks
So many of the most battered industries don’t matter much because of the way stock indexes are structured.
Bloomberg, August 4, 2020

The economy we each experience – local, personal and (for the most part) not publicly traded – has been awful. Yes this economy plays only a small part in the stock market’s moves. To explain why these subjective experiences are not weighing down equity markets, we must look more closely into the intersection between the weakest industry sectors in 2020 and their impact on equity market indices.

The surprising conclusion: The most visible and economically significant market sectors are also among the smallest weight by market capitalization. Markets, it turns out, are not especially vulnerable to highly visible but relatively tiny industries. The 30 most economically damaged industry categories1 could be de-listed before tomorrow’s open, and it would hardly shave more than a few percentage points off the S&P 500 index.2

This is so despite the worst U.S. economic collapse since the Great Depression. It is an “Off the Charts” economy, with data series like Gross Domestic Product, Unemployment Rate, Initial Jobless Claims so bad they must be re-scaled to even fit on charts. There has never been an economic contraction of the depth and speed of 2020’s in American history.

But the U.S. economy is not the stock market and vice-versa. As we discussed previously, missing overseas strength is a form of denominator blindness. The giant FAANMGs companies3 derive about half — and in some cases even more — of their revenues from abroad. Beyond that, the pandemic lock down in the U.S. has benefitted these giant tech companies’ sales and profits. No wonder the Nasdaq Composite 100 Index, which is dominated by big tech companies, is up about 26% this year.

But a reasonable person might argue that GDP fell by about a third in the second quarter and the S&P 500 should be in synch with that. What’s more, of the 500 companies in the S&P 500, about 450 of them are doing terribly. Industries such as retail, travel, energy, entertainment, dining have seen sales evaporate. Bankruptcies are piling up — legendary retailer Lord & Taylor is just the latest — and more are surely coming. Yet, the S&P 500, after a huge plunge in March, is up 2% this year.

Market capitalization is the reason why.

Start with some of 2020’s worst-performing industries: Year-to-date (as of the end of July), these include department stores, down 62.6%; airlines, off 55%; travel services, down 51.4%; oil and gas equipment and services, down 50.5%; resorts and casinos, down 45.4%; and hotel and motel real estate investment trusts, off 41.9%. The next 15 industry sectors in the index are down between 30.5% and 41.7%. And that’s four months after the market rebounded from the lows of late March.

These are highly visible industries, with companies that are well-covered by the news media with household names known to many consumers. Retailers are everywhere we go. Gas stations, chain restaurants and hotels are ubiquitous in cities and suburbs across the country. Even though most American’s only fly a few times a year, we plan family trips and vacation travel to places with theme parks, resorts, hotels and casinos.4

So although high visibility industries may be of considerable significance to the economy, they are not very significant to the capitalization-weighted stock market indexes.

Consider how little these beaten-up sectors mentioned above affect the indexes.  Department stores may have fallen 62.3%, but on a market-cap basis they are a mere 0.01% of the S&P 500. Airlines are larger, but not much: They weigh in at 0.18% of the index. The story is the same for travel services, hotel and motel REITs, and resorts and casinos.

This terrible economic data that does not yield a correspondingly bad market reaction leads to yet another form of investor denominator blindness. Everyone sees the numerator – the economy’s impact on these sectors – but most miss the denominator, namely, the weightings of these sectors in broad market indices. The worst 50 worst performing industry sectors are under 6% of the index’ capitalization.

Not to be blasé, but Mr. Market is informing investors that these tiny sectors do not matter all that much to index performance. And the sectors that do matter? Consider just four industry group — internet content, software infrastructure, consumer electronics and internet retailers — account for more than $8 trillion in market value, or almost a quarter of total U.S. stock market value of about $35 trillion. Take the 10 biggest technology companies in the S&P 500 and weight them equally, and they would be up more than 37% for the year. Do the same for the next 490 names in the index, and they are down about 7.7%. That shows just how much a few giants matter to the index.

On some level, it’s completely understandable why many people believe that markets are no longer tethered to reality because the performance doesn’t correspond to their personal experience, which is one of job loss, economic hardship and personal despair. But what’s important to understand is that indexes based on market-cap weighting are often driven by the gains of just a handful of companies. But one thing the market isn’t is irrational or disconnected from is the reality of market capitalization, and its impact on stock indexes.

Mr. Market, as it turns out, is far more rational than your personal experiences may have led you to believe. 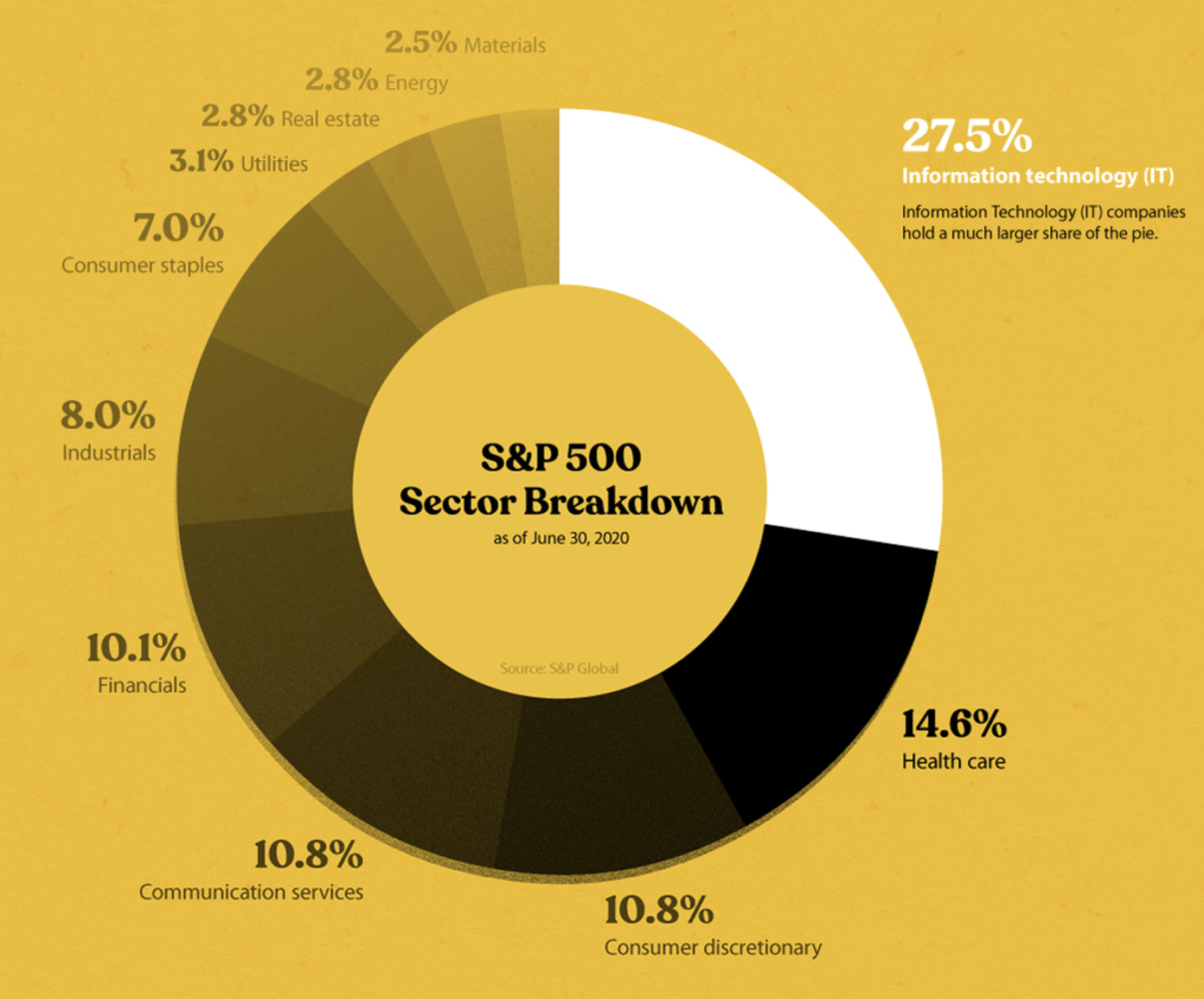 3. Both before and especially since the pandemic, those six stocks have been the biggest drivers of the market-cap weighted indices like the Nasdaq 100 or the S&P 500 indices. If your only frame of reference is a domestic economy, this is easy to miss.

4. Every conference I was scheduled to appear at in 2020 has been cancelled; 2021 is likely all canceled also. Every event I was planning to attend, ranging from vacations to holidays with the family, to weekend excursions – gone. It sure does feel like this should matter a great deal.

I originally published this at Bloomberg on 00,00,2018. All of my Bloomberg columns can be found here and here.

Maybe Mr. Market Is Rational After All…