Yves here. I hate to be my usual pessimistic self, but I don’t see much reason to hope for organized resistance in the US, as opposed to various types of desperate lashing out. Neoliberalism and libertarianism have been very effective in getting people to see themselves as atomized and therefore having little power. They have also weakened community bonds by creating workplace demands that undermine most people’s ability to have much in the way of social networks outside their place of employment. The systematic attacks on unions is a big part of this picture, even though some like the National Nurses United still are effective politically.

A second issue is, as we’ve seen with the Black Lives Matter protests, is that even when protestors try to hold peaceful demonstrations, they serve as opportunities for looters. This was pronounced in New York City, where business owners, who had no reason to be de facto defenders of the Black Lives Matters marches, said that the looting was clearly organized by criminal groups: the businesses were cased during the day by people on bikes, and groups would come in during the evening with trucks to make heists. 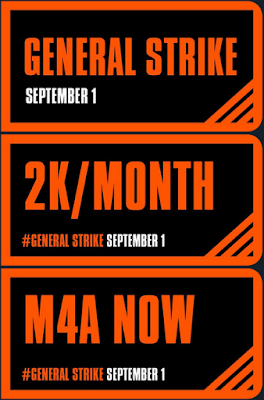 I can hire one half of the working class to kill the other half.
—Jay Gould, 1886

It’s normally a bad idea to denigrate the other side’s supporters in a fight, especially in a political fight like the one we’re currently witnessing, and especially when the game that’s really being played is the oligarch’s version of Eric Berne’s “Let’s You and Him Fight” — the one where the rich get the poor to kill each other, while they steal the both of them blind.

So don’t consider this piece to be about the other side’s supporters, whichever side the “other side” is to you, so much as it is an indictment of all of us, and a call for all of us to change our ways.

The indictment comes from Juan Cole, writing at Informed Comment. Two notes before we begin. First, I’m going to quote at some length, so forgive me; his point is stronger that way.

Second, despite its headline, the point is not about resistance to Trump alone, but far more general than that. Is America’s broken state the fault of Republicans, or do the corrupted leaders of both parties have a hand in what we suffer?

Nicole Winfield and Lisa Marie Pane at the Associated Press write at the unbelief with which Europeans are staring at the United States, as we head for 300,000 dead from the coronavirus and our economy shrank 33% on an annualized basis last quarter, and we just appear to be all right with that.

Not only are we perfectly willing to toss grandma in an early grave on Trump’s say-so, but we are supine as he openly engineers the destruction of social security and medicare, and of the post office, on behalf of himself and the billionaire class he represents. That is after we sat by while he completely gutted all environmental regulations that got in the way of corporations making money off poisoning us. I don’t think the neutering of the EPA has even been reported on daytime cable news, though the prime time magazine shows on MSNBC have at least brought it up.

In fact, Americans are masochistic sheeple who let the rich and powerful walk all over them and thank them for the privilege. …

The rich figured out in the 1980s that Americans are all form over substance, and if you put up for president a Hollywood actor like Ronald Reagan who used to play cowboys, they would swoon over him. In 1984 when Reagan ran against Walter Mondale, I saw a middle aged white Detroit auto worker interviewed who said he woudn’t vote for Mondale because he was a “panty-waist.” Reagan took away their right to strike and took away government services by running up the deficit and cutting taxes on the rich simultaneously, then claiming the government couldn’t provide the services the people had paid for because it is broke.

Reagan raised the retirement age from 65 to 67. Why? Most young people don’t realize that their health will decline in their late 60s and they often won’t actually get any golden years.

What did Americans do in response? They just bent over and took it.

Actually, it is the French who are much more like Americans imagine themselves to be. President Emmanuel Macron last December tried to raise the retirement age from 62 to 64. I can’t understand why. France has persistently high unemployment as it is.

In response, all hell broke loose. Some 30 unions went on strike, and they supported each other. Trains were interrupted. Trucking was interrupted. Life was interrupted. A million people came out into the streets. But one poll had 61% of the French approving of the strikes. They went on for months, and were very inconvenient. …

Macron backed down on raising the retirement age.

In the 2000s, Americans ridiculed the French as “surrender monkeys” for not joining the “Coalition of the Willing (to Commit War Crimes in Iraq).”

That was particularly rich coming from a nation that, in 2000, had just witnessed its presidency stolen by a blatantly partisan Supreme Court — and lifted not a single finger to stop it. The French (and Germans, and Italians) would have been in the streets had that happened to them, burning cars and reputations until the wrong was redressed.

The 2000 election was a constitutional coup — two of them if you count the one attempted by George Bush’s brother Jeb in Florida, whose own coup attempt was made moot by the U.S. Supreme Court’s. Yet for almost every American, it happened on television only, a game show to be watched between dessert and the late-night comics.

Cole writes about how the French are not only willing to “throw a first class fit when the servants of the rich in government come after their lifestyles,” but also how all of the unions and most of the working class had each other’s backs during these actions.

For contrast, in the U.S. the United Food and Commercial Workers union recently filed a lone-wolf lawsuit against the Dept. of Agriculture for allowing poultry manufacturers to speed up production lines, and no other union joined with them. In France, according to Cole, “it wouldn’t have been one union filing a lawsuit. … It would have been a massive set of mutually reinforcing strikes.”

Now for the call to change our ways: At the beginning of the third decade of the 21st century, Americans face a crossroads. For everyone who isn’t either independently wealthy (like most of the donors who make up the real Republican base), or comfortably tucked into the professional managerial class (whose interests the Democratic Party seems most to serve), daily life is a both horror show now and collapsing fast to something even worse.

If there were ever a time to rise up, it’s today. And rise up Americans will, I’m sure of it. With Covid deaths high (1,000 a day as I write this), incomes insecure for all but work-at-home professionals, and evictions just one or two missed paychecks away, even for the pre-Covid comfortable — with all this at the door, why would they not?

Will Americans rebel in an organized, focused way — like colonial Americans, for example, rose against British taxes, with planned resistance and coordinated action?

Or will the next rebellion devolved to the kind of battle that Jay Gould contemplated more than a century ago, a civil war where half of the suffering class attacks the other half, a chaotic free-for-all that allows the muscular security state to bootstomp in and “restore order” — all while our modern Jay Goulds (our Jamie Dimon, our Bezos, our hedge fund kings and queens, our CEOs of Google, Disney and Comcast), sail blindly off to their private-jet cocktail sunset, feeding on caviar and broken hearts?

Will Americans rise up effectively, with targets in mind — Medicare for All, Student Debt Forgiveness, Free Public Colleges and Universities, an actual End to Police Violence and Murder — and fight the misery descended upon them all?

Or will they rise up chaotically, their legitimate protests hijacked by Boogaloo Boys and FBI provocateurs, a faux-revolt where fascists battle anti-fascists, the former aided by violent, racist police, until the nation, getting nowhere, yearns for the security of a rapid but “managed” decline over the insecurity of a state-funded free fall to despair?

The time to decided all this is now, before the real first spark, the one that starts the American Arab Spring, is lit. If a General Strike seems frightening, consider the alternative, a five-way civil war with armed cops permanently stationed in the streets and skirmishes everywhere.

The French learned their lesson in 1789 and the century that followed their world-historical revolt, though it took them six generations to get things right.

“America, rise, or you will surely fall” is a lesson this generation has yet to learn. The task is not only to rise from a five decades of sleep, but in rising, to act in a way that dispels the nightmare, and doesn’t continue it.