It might behoove CalPERS Vice Chairman of the Board and Investment Committee chairman Theresa Taylor to heed folk wisdom, like “People in glass houses should not throw stones” and “When you are in a hole, stop digging.”

But the saying that appears most fitting for Taylor’s idiotic intervention in the scandalously rapid exit of CalPERS CIO Ben Meng is “You can’t fix stupid.”

Taylor just executed a multi-level backfire in attacking fellow board member Margaret Brown when she publicized an article in Buyouts Magazine which gave prominent play to Brown’s concern that Meng’s private equity conflicts potentially tainted not just the fund’s $500 million investment in a Blackstone fund earlier this year, the apparent trigger for Meng’s high velocity exit, but the private equity program broadly, and that CalPERS therefore needs to rein its private equity investment in until it has performed an investigation and implemented new oversight policies. 1Until the Board understands what actually happened, it cannot make prudent decisions about how to proceed.

As we’ll review, first by attacking Brown, Taylor gave the Buyouts story more prominence than it otherwise would have had. Second, Taylor is under investigation for similar abuses to the ones Meng engaged in, specifically, for multi-year failures to report significant income on her Statement of Economic Interest (Form 700), California’s required annual financial form for public officials. That means Taylor is not a credible spokesperson on any matter that relates to propriety or legality. Having her speak up for CalPERS is about as credible as having Trump’s former attorney/fixer, the felon Michael Cohen, defend Trump.

As an aside, the election committee for Taylor’s 2018 campaign is also under Fair Political Practices Commission investigation (case 2020-00074)

So Taylor sticking her head above the CalPERS parapet simply calls more attention to the allegations that Taylor hid income, despite the Forms 700 requiring an attestation under the penalty of perjury. Taylor has confirmed the charges by amending some of her Forms 700 four years after the fact to include the income that the FPPC complaint said she failed to report.

Third, Taylor predictably misrepresents facts and issues, possibly due to her lacking the intellectual capacity to discern what is relevant. After all, even though Taylor is a tax collector, she apparently didn’t know what income was and hence managed not to include a lot of it in her Form 700 filings. Now that the press has woken up and started doing actual reporting on CalPERS, uninformed bluster no longer cuts it.1

Finally, Taylor, who has the backing of SEIU, apparently does not understand that investing private equity is buying the rope that billionaires like Blackstone’s Steve Schwarzman are using to hang labor.

Now to the substance of the squabble. Buyouts, a publication whose readership is private equity professionals, published a story today by Justin Mitchell titled CalPERS board member calls for hold on PE investments after CIO resignation. Nearly all Buyouts pieces are tightly paywalled, but Buyouts chose to make this story available to the great unwashed public. From the top of the article: 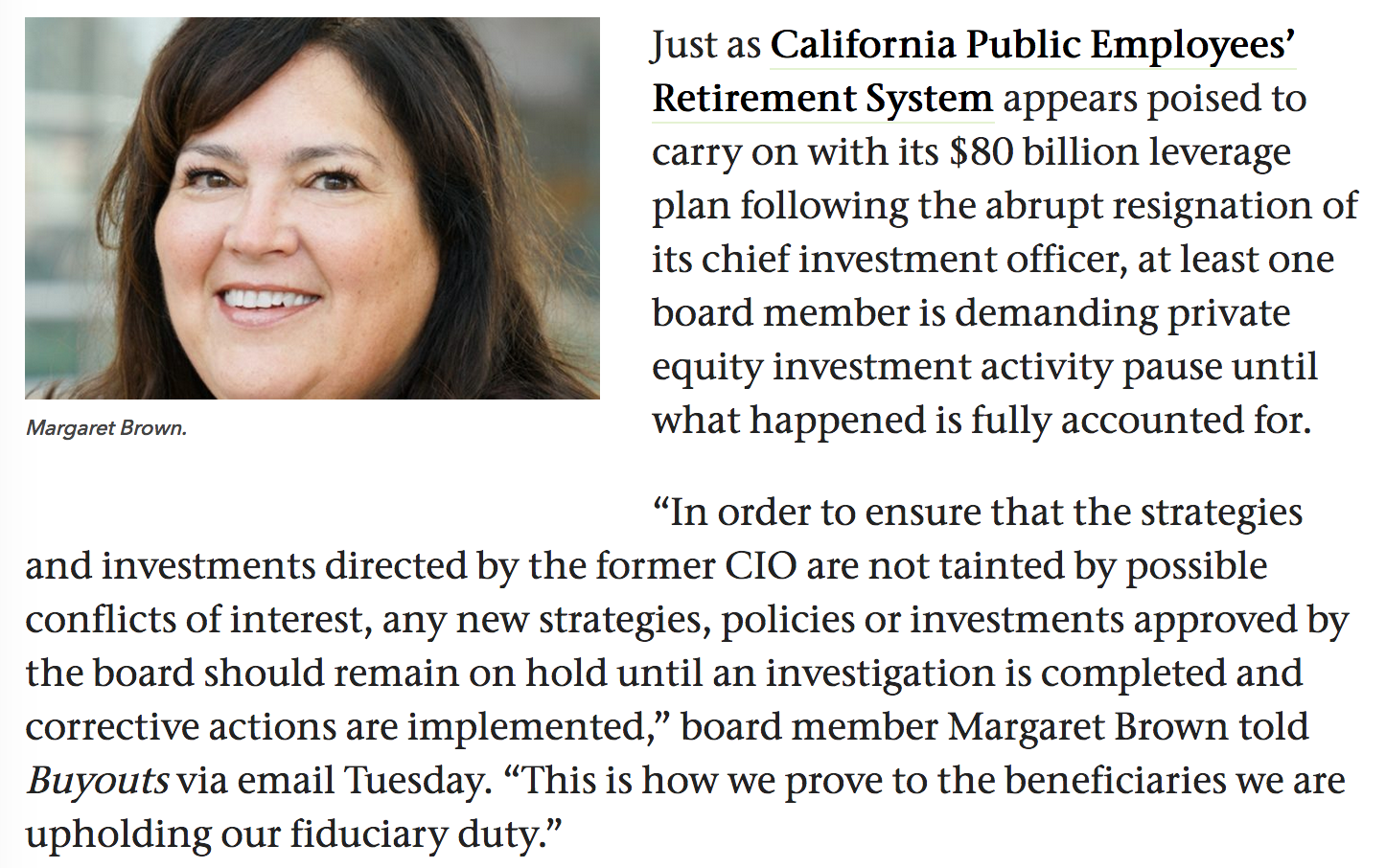 As you can see in the story, CalPERS declined to comment, but provided a general statement that it was “moving forward” with the private equity, private debt, and fund level leverage plans hatched on Meng’s watch. Board President Henry Jones also backed the “all systems go” stance: “I believe our strategy must go forward.”

Before going any further, notice that Brown felt it necessary to reiterate Controller Betty Yee’s call for an investigation:

I believe the Board has an obligation to CalPERS members to determine whether Mr. Meng’s carelessness violated any laws or caused financial and reputational damage to the pension system…While the CIO’s resignation was appropriate, the Board’s obligation to CalPERS members does not end there. Rather, it calls for a swift and thorough inquiry into this matter and potential actions needed.

Brown and Yee presumably mean an independent investigation, under board direction, since Institutional Investor reported that CalPERS had already conducted an internal investigation. Also note that Brown is making her call after CalPERS emergency closed session meeting on August 17. The fact that Brown is now joining Yee’s demand strongly suggests that either the board was briefed on the internal investigation and it was inadequate in key respects, or in what would be a stunning governance breach, staff was not fully forthcoming about what was in the report.

It’s secrecy that hurts the fund not transparency. The CEO & a few Board members knew for months & hid it from the rest. Worse yet, the CEO let Meng push Private Equity (More Better Assets) while knowing of conflicts. I may be one vote, but I’m the ONE who will get to the truth.

Someone needs to tell Taylor that she’s really crappy at the “lying for CalPERS” game. It takes less than 30 seconds on Google to establish that the Board had not even approved the “more private equity” plan 1.0, the since abandoned “Pillars Three and Four” strategies, until AFTER Meng joined. And Meng influenced the design of that scheme, by pushing for an even larger private equity commitment than has been underway under Ted Eliopoulos, consistent with Meng’s widely reported exhortation: “We need private equity, we need more of it, and we need it now.” From the Wall Street Journal in March 2019:

Its latest proposal is a departure from the way most public pension funds invest in private equity. Instead of investing alongside other limited partners in funds run by outside firms Calpers intends to be the sole backer of at least two limited liability companies. The companies will be overseen by outside managers, which will act as general partners.

How much could be invested is still not known. Officials have said it could be as much as $20 billion over the next decade but Mr. Meng in a February presentation to the board included a slide showing a hypothetical scenario in which the Calpers invested as much as 16% in private equity. That would amount to a $57 billion commitment to private equity and would make Calpers the third-biggest such investor in the world, according to Preqin data.

1 Contacts that have been “on the record” and “on background” sources for recent CalPERS stories have told us that the journalists are volunteering that they see the CalPERS PR department as telling flagrant lies and often unpleasant to deal with.