We will have a heavy dose of CalPERS through and including next week. I hope you don’t mind given that this is a slow general news period.

New Electronic Skin Can React to Pain Like Human Skin – For Better Prosthetics and Smarter Robots SciTechDaily (Kevin W). Aaw, movie fail in anticipating science. The Terminator didn’t have sensitive skin, recall the scene in T2 where he cuts the skin off his forearm to show he’s an android.

The Hidden World of Legacy IT IEEE Spectrum (Chuck L). A favorite topic!

National Institutes of Health disses FDA on plasma as COVID treatment ars technica. How the hell were the tests conducted in New York which stated in April not conducted to a standard that the officialdom would know something by now? See: Plasma treatment being tested in New York may be coronavirus ‘game changer’ NBC

Small-Business Failures Loom as Federal Aid Dries Up New York Times. As we predicted quite a while ago.

Thousands of small-business loans may have been fraudulent, U.S. House panel finds Reuters. Resilc: “But most of the big ones?”

Worries about being laid off, having hours cut jump: Gallup The Hill

Why Britain is more geographically unequal than any other rich country https://t.co/qgEpDOozDe

A Saudi Prince’s Attempt To Silence Critics On Twitter Wired

Replication: Why We Still Can’t Browse in Peace: On the Uniqueness and Reidentifiability of Web Browsing Histories Usenix (Chuck L)

Trump denies ‘mini-strokes’ sent him to Walter Reed The Hill

Pelosi helped a Kennedy lose in Massachusetts for the first time ever. LMAO https://t.co/mbbQs9R9gG

Pelosi is eating that entire fridge of ice cream rn

If Trump refuses to accept defeat in November, the republic will survive intact, as it has 5 out of 6 times in the past The Conversation

Take to the Streets CounterPunch

One theory I heard is that absolutely no one at the New York Times has the slightest clue what progressive means. #masenate pic.twitter.com/GVh6bzssXb

Tomorrow, Gavin Newsom will sign this into law, and end a small part of American slavery that is still with us in *checks calendar* 2020. https://t.co/gcijHNFCaR

Band kicked out of park says SF musicians need support: ‘This is why SF is losing its artists’ SFGate (CC)

How the Sacklers Shifted $10.8 Billion of an Opioid Fortune Built on OxyContin Bloomberg (resilc)

Only a shift in labour’s bargaining power can light up US inflation Financial Times (John C). If you can’t access the piece, it argues for more inflation as a good thing, hence more labor bargaining power is a good thing. Erm, how about rampant inequality is bad for social stability, groaf, and even the health of the rich? Although the author did wind up getting to those issues:

Yet Mr Powell is going all-in on failed policies. He has admitted that inflation has never returned to 2 per cent on a sustained basis and productivity is on the decline. These outcomes are not in spite of Fed policy but because of it.

Zombie companies — those that do not earn enough to cover their interest payments — are nearly one-fifth of all listed businesses in America, according to Deutsche Bank, from virtually zero at the turn of the millennium. Meanwhile, the top 10 per cent of the population owns 87 per cent of the stocks, so the rising market perpetuates inequality, leaving the other 90 per cent with bank accounts that earn nothing.

Rather than trying to take credit for a “Great Moderation,” the Fed should be recognised for achieving a great polarisation — social and economic, and consequently, political.

My daughter sent this to me recently: newly-acquired hamsters existing peacefully with her rescue kitty. The cat is fascinated by the hamsters, but makes no effort to get at them. Likewise, the hamsters are more skittish round humans… 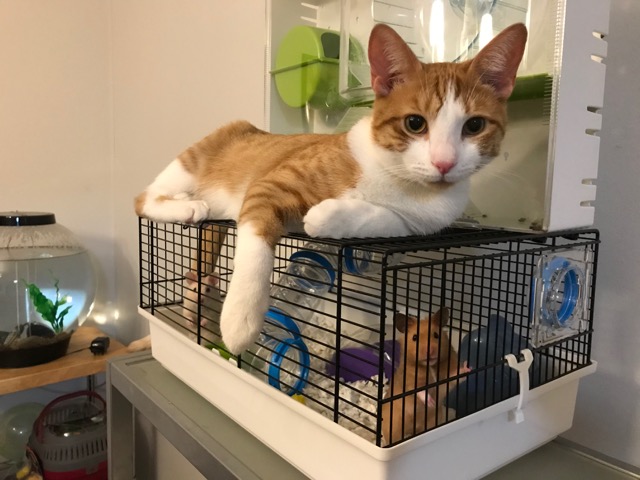 And a second bonus courtesy Kevin W, a rescue off Wales: