Recall that in the press reporting on l’affaire Meng, CalPERS in its spin to the press was remarkably open how it intended to bury the matter and not inform the board that its highest-paid officer might have violated the California Political Reform Act.1 From Bloomberg on August 8:

But she [Frost} planned to discipline him — either by cutting his incentive pay or possibly by placing a formal letter into his file.

It was actually in April that the disclosure issues first came to light internally at CalPERS, when a compliance team flagged a violation: a $70,000 investment in shares of Blackstone Group, which Meng owned at the same time the pension fund made new investments in the firm, according to a Bloomberg report. A former colleague of Meng’s tells Institutional Investor that the then-CIO told this person at the time that an internal investigation had been done and that the issue was resolved.

Needless to say, keeping the board in the dark is a well-established pattern at CalPERS.

While CalPERS does give quarterly compliance report to the Risk & Audit Committee, if you look at the document, you can see, as the table below illustrates, they are entirely about process and keep the board in the dark about the substance and seriousness of allegations. This example comes from a 2019 report, but if you look at more recent quarterly compliance reports, they all follow the same format: 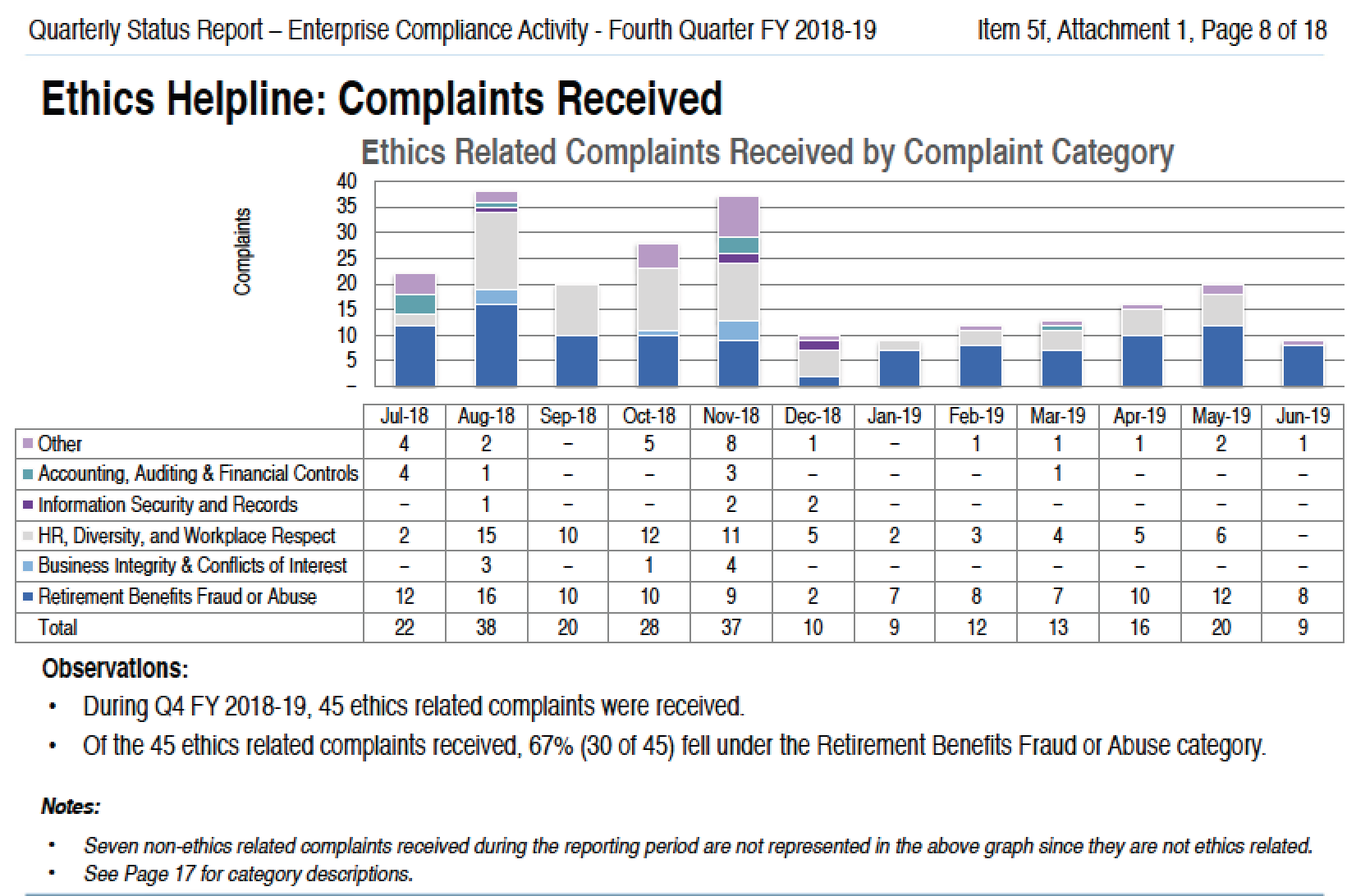 Note that in the footnote, CalPERS staff directs the board’s attention to the number of complaints, which gives you no clue about that the matters are or more important, there severity. And highlighting that most are about benefit fraud flatters the staff, since it implies that most abuses are outside parties trying to take advantage of CalPERS, and not problems within CalPERS. The board would have no way of knowing it there had been an allegation of something as serious as embezzlement, kickbacks, or a rape from this report.

A final, and obvious problem is the unseriousness of the complaints hotline. A basic rule of compliance is that you don’t design an oversight process to report to people who may be part of the problem. Inherently deficient processes like that lead to JP Morgan London Whale and Wells Fargo fake accounts scandal type outcomes. No one interested in career advancement who had an ounce of common sense would ever report a serious violation to this sort of complaint line unless they were afraid they were going to be scapegoated.

If CalPERS actually cared about having an effective complaint process, the hotline would go to the board, say via an outside consultant engaged by a law firm in case CalPERS might feel the need to take legal action. The compliance reports and the obviously defective complaints process offers further proof that CalPERS board isn’t interested in doing its job of minding a $400 billion store.

1 Meng did not fall afoul of Government Code 1090, which is a criminal conflict of interest, due to his income being so high that he fell into the exemption in 1091.5:

1091.5. (a) An officer or employee shall not be deemed to be interested in a contract if his or her interest is any of the following: