It appears to have been a wee bit of good luck to have sat out the initial consternation over the revelation of the Government’s plan to pass legislation that would “overwrite” the Withdrawal Agreement. Recall that the Withdrawal Agreement, unlike the Political Declaration, is a treaty, even if it envisaged that portions would be superceded by a trade pact. For those of you not following this story closely, the state of play on Monday, courtesy the Financial Times:

The UK is planning new legislation that will override key parts of the Brexit withdrawal agreement, risking the collapse of trade negotiations with Brussels.

Sections of the internal market bill — due to be published this Wednesday — are expected to “eliminate the legal force of parts of the withdrawal agreement” in areas including state aid and Northern Ireland customs, according to three people familiar with the plans….

The UK internal market bill, outlined in a 100-page white paper in July, is designed to secure the “seamless functioning” of trade between England, Wales, Scotland and Northern Ireland after the UK leaves the EU’s single market and customs union at the end of this year…

Under the withdrawal agreement, the UK must notify Brussels of any state-aid decisions that would affect Northern Ireland’s goods market, and compel businesses in the province to file customs paperwork when sending goods into the rest of the UK. But clauses in the internal market and finance bills will force the UK courts to follow the new UK law rather than the EU deal, diluting the ability of the protocol to intrude on UK state-aid policy.

The autumn finance bill…is also expected to overwrite a third aspect of the Northern Ireland protocol covering the payment of tariffs on goods entering the region, said those familiar with the plans.

A second person familiar with the impending bill said [the UK chief negotiator] Lord [David} Frost had personally driven the decision to take the “nuclear option” of overwriting the withdrawal agreement, despite progress being made in talks on implementing the Irish protocol.

A simplified schematic of the sticking point: 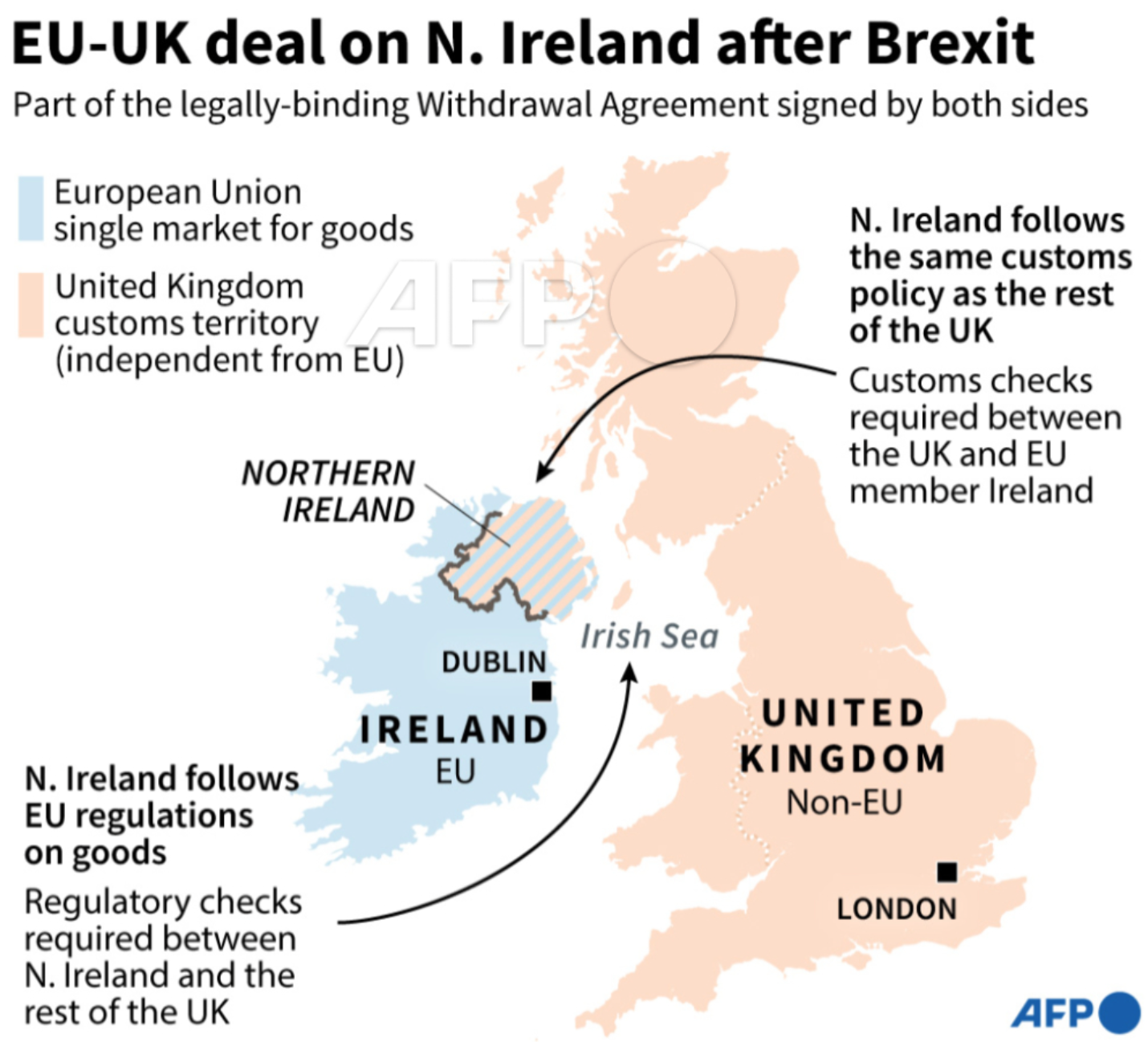 The Financial Times comments section, which normally has some fairly forceful Brexit defenders, had nearly 3000 comments, virtually all of them varying takes on the UK demonstrating itself as being not agreement capable.

And recall that Boris Johnson can’t pretend to be victim of Theresa May’s handiwork. He came into office, determined to “get Brexit done,” negotiated this very same Withdrawal Agreement, which he also persuaded Parliament to approve. So he didn’t read the fine print and now has buyer’s remorse?

Clive, who has become our house Brexit defender, argues that the Withdrawal Agreement was a mess. While that is no doubt true, parties enter into contracts with slipshod provisions all the time, and a treaty has more gravity than a garden variety commercial contract. It is bad faith to go off and say you’ll just make up your own provisions in place of inconsistent or overly vague or loose language. In the private sector, you’d amend the agreement. In the international context, you might enter into a side deal to clean up the defective parts.

But Sir Ivan Rogers appears to have anticipated a row like this. Recall that he warned several times that trade deals had always been done between parties that wanted to get closer, never ones wanting more space. The UK upending the table appears to be it acting out that it really doesn’t want to be hostage to the things that go into a trade agreement.

There was also a lot of fulminating on Monday as to whether the UK had violated international law or whether the relevant sections of the Withdrawal Agreement were so kludgey that it arguably hadn’t. The Government settled that issue on Tuesday:

“Yes, this does break international law in a very specific and limited way”. pic.twitter.com/6B8pU5M2cH

This admission didn’t go over well even among Tories. From John Grace at the Guardian:

What followed was a near-universal pile on from both sides of the house, with only Iain Duncan Smith, John Redwood and Steve Baker rushing to Lewis’s defence. The kind of support Lewis could have done without as all three seemed to imply that Boris had promised them last year that he would renege on the Northern Ireland protocol, which was the only reason they had voted for it in the first place. Besides, it was vital that the UK could continue to offer state aid to tech companies, such as the one that had delivered the “world-beating” test and trace coronavirus app. By the end Lewis was all but begging them to shut up.

Theresa May was first to go on the attack. The UK had signed the protocol and it was our duty to abide by it. What would be the consequences for any other international treaties if the UK could not be trusted to keep its word? We would be no better than any of the other failed, rogue states the UK was always so quick to deplore for doing the same thing. Tory Simon Hoare made much the same point, as did a host of opposition MPs.

And there was plenty of other disapproval:

“The idea that you could re-write your part of the agreement is just unacceptable. It’s a breach of international law.”

In an exclusive interview former US Ambassador, Sir Kim Darroch, responds to suggestions the PM could modify the Brexit withdrawal agreement

No Attorney General in modern times has so condoned state illegality as Suella Braverman. At least one senior official has resigned over breaching treaty obligations. More expected to follow. Wholly unprecedented. The disintegration of the rule of law – the Brexit curse.

The Government’s top lawyer left in protest. From the Financial Times:

The head of the UK government’s legal department has quit over Boris Johnson’s proposal to row back on parts of last year’s Brexit deal relating to Northern Ireland.

Jonathan Jones, the Treasury solicitor and permanent secretary at the Government Legal Department, is the sixth senior Whitehall official to resign this year, amid growing tensions between the prime minister and staff at the top of the civil service…

Sir Jonathan did not explain his decision in a short resignation letter posted online. But two officials with knowledge of the situation told the Financial Times that he was leaving his position due to a dispute with Downing Street over its plans to challenge parts of the Brexit withdrawal agreement.

Those close to Sir Jonathan said he was “very unhappy” about the decision to overwrite parts of the Northern Ireland protocol, part of the 2019 withdrawal agreement, with new powers in the UK internal market bill.

An ugly part of this picture is the UK attorney general, Suella Braverman, appears as well qualified to hold that post as Marcie Frost is to head CalPERS. While that may not technically be fair, since Braverman does have a law degree, but Richard North reminds us that Marina Hyde has called Braverman, “leading invertebrate.”

Both the Irish Times and the Guardian quickly ran stories quoting Congresscritters saying that any UK action that would undercut the Good Friday Agreement would kill any US-UK trade deal.

Jolyon Maugham is also considering how to petition the courts to block the proposed bill. From his Good Law Project site:

As was reported on Monday and Brandon Lewis, the Secretary of State for Northern Ireland, confirmed today, the Government is making deliberate plans to break the law. It wants to breach the terms of a treaty it signed with our biggest trading partner only seven months ago.

That decision by Ministers would breach the Ministerial Code, a point confirmed in this recent Court of Appeal decision.

The widely respected head of the Government Legal Department – Sir Jonathan Jones – has resigned. The Financial Times suggests he did so after his advice on the unlawfulness of the Government’s conduct was contradicted by that given by the Attorney General, Suella Braverman.

Taking action is not free of difficulty but we have already initiated preliminary discussions with several leading Counsel around what seems to us to be a clear breach of the Ministerial Code.