Oil Demand Has Collapsed, And It Won’t Come Back Any Time Soon NPR

Shock and sorrow as Canada’s biggest co-op sold to US private equity firm Guardian (IM). IM: “Canadians who were born in the 70s grew up with MEC; I always had an MEC backpack for school, bought my winter jackets there, and when I spent serious time in the mountains in the 1990s, I couldn’t wait to make trips to the store in Calgary to gear up. There really was a co-op spirit that reflected the organization’s collectivist, hippie west coast / prairie roots. Many meaningful trips in the wilderness happened with MEC gear. Now it’s…in the hands of private equity.”

Warren Buffett’s BNSF Railway Names Kathryn Farmer First Female CEO Of Major Railroad Forbes. BNSF moves a lot of coal, and a lot of containers. So a woman is holding the bag…

Wildfire dispatch from an Oregon farm The Counter

Oh wow. I covered the backs of 2 window fans with paper towels and sat them on a table in my living room. This is what happened. (Previous dips were from opening the bedroom door to allow some ventilation for a bit) pic.twitter.com/msRq13EZTR

Community and Close Contact Exposures Associated with COVID-19 Among Symptomatic Adults ≥18 Years in 11 Outpatient Health Care Facilities — United States, July 2020 Morbidity and Mortality Weekly Report. From the discussion: “Exposures and activities where mask use and social distancing are difficult to maintain, including going to locations that offer on-site eating and drinking, might be important risk factors for SARS-CoV-2 infection.” Handy chart: 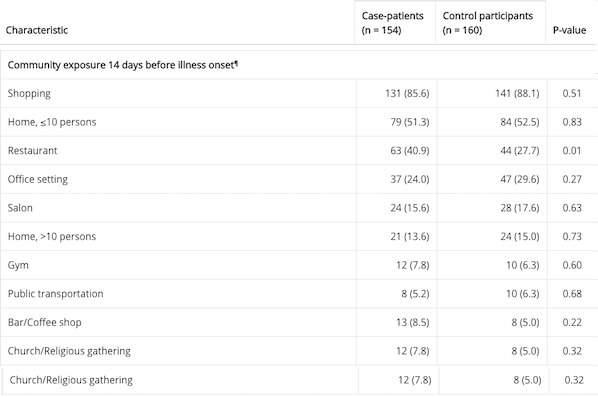 This is interesting, but these are also aggregates, and the virus is highly capricious. For example, I would bet exposure varies by church denomination and worship style (shouting, singing). “Shopping” is also a category that’s far too broad: Air circulation patterns will differ between and within malls and small shops.

‘Trained Immunity’ Offers Hope in Fight Against Coronavirus Quanta. And from that article–

COVID-19 herd immunity: where are we? Nature. From the discussion: “With flu pandemics, herd immunity is usually attained after two to three epidemic waves, each interrupted by the typical seasonality of influenza virus and more rarely by interventions, with the help of cross-protection through immunity to previously encountered influenza viruses, and vaccines when available10. For COVID-19, which has an estimated infection fatality ratio of 0.3–1.3%1,5, the cost of reaching herd immunity through natural infection would be very high, especially in the absence of improved patient management and without optimal shielding of individuals at risk of severe complications. Assuming an optimistic herd immunity threshold of 50%, for countries such as France and the USA, this would translate into 100,000–450,000 and 500,000–2,100,000 deaths, respectively. Men, older individuals and those with comorbidities are disproportionally affected, with infection fatality ratios of 3.3% for those older than 60 years and increased mortality in individuals with diabetes, cardiac disease, chronic respiratory disease or obesity. The expected impact would be substantially smaller in younger populations.”

High potency of a bivalent human VH domain in SARS-CoV-2 animal models (preproof; PDF) Cell. From the abstract: “It potently neutralized mouse adapted SARSCoV-2 in wild type mice at a dose as low as 2 mg/kg and exhibited high prophylactic and therapeutic efficacy in a hamster model of SARS-CoV-2 infection, possibly enhanced by its relatively small size… The potent neutralization activity of VMH-Fc ab8 combined with good developability properties and cross-reactivity to SARS-CoV-2 mutants provide a strong rationale for its evaluation as a COVID-19 therapeutic.” This really does look like a novel approach (here is the English version), although let us remember the First Law of Animal Studies: “Monkeys exaggerate and mice lie.”

Man ‘uses snake as a face mask’ on bus Yahoo News (Re Silc).

How COVID-19 Has Affected One Mexican Pueblo Commonweal

The Great British Humbling The Atlantic

Israel signs deal establishing formal ties with two Arab states at the White House WaPo. And it’s not even October!

Economists warn of US ‘wasteland’ without stimulus deal FT

QAnon site shutters after reports identifying developer The Hill. For a world-girdling conspiracy theory that’s shaping up to be our next moral panic, this Jason Gelinas dude is making $3,000 a month on Patreon? That’s enough to keep him in granite counter-tops, but hardly f*ck you money for somebody who works on Wall Street, even if only in IT. Gelinas looks like an opportunistic arriviste to me. I’m still waiting for our famously free press to find out who (or what) the original Q was. Isn’t that the story here?

Sudden efforesence on this topic:

We need to reclaim populism from the right. It has a long, proud leftwing history Thomas Frank, Guardian

Conservatives Should Ensure Workers a Seat at the Table American Compass. Since liberal Democrats don’t want to….

Red and Blue America took different roads. Here’s how to bring them together Jeffrey Sachs, CNN

How the Death of Faith Will Hurt the Left Murtaza Hussain, Wisdom of Crowds

Guns or Butter: How the Public Judges Its Leaders in an Authoritarian Regime NYU Jordan Center

in ohio news, my parents put an old truck on facebook marketplace and people offered to trade them guns for it

Waiting for technicals, here, where they put the guns on the truck, Mad Max-style.

Who Pays for Covid-19 Medical Care? That Depends on How (or if) You Are Insured WSJ. The deck: “Pandemic has put a spotlight on the vast differences in affordability of health care across the country.”

U.S. commander: Intel still hasn’t established Russia paid Taliban ‘bounties’ to kill U.S. troops NBC. I don’t understand this at all. When the Times broke the story, they sourced it to “American intelligence officials.” What could have gone wrong?

Your Man in the Public Gallery: Assange Hearing Day 10 Craig Murray. A must-read.

Column: We don’t know much about the ambush of 2 L.A. County deputies. But we have scapegoats Los Angeles Times

For Poor Countries, Gains in Education Are Not Matched in Income Federal Reserve Bank of St Louis (UserFriendly).

Mom lied about residence to get TennCare benefits for her 3 kids, officials say FOX17. Faces up to 27 years in prison.

Stripe will pay workers $20,000 to move — then cut their pay Los Angeles Times

World missing all targets to save nature, UN warns France24

New Climate Maps Show a Transformed United States Pro Publica (Re Silc). “Today, the combination of truly dangerous heat and humidity [“wet bulb”] is rare. But by 2050, parts of the Midwest and Louisiana could see conditions that make it difficult for the human body to cool itself for nearly one out of every 20 days in the year. New projections for farm productivity also suggest that growing food will become difficult across large parts of the country, including the heart of the High Plains’ $35 billion agriculture industry.” Handy map: 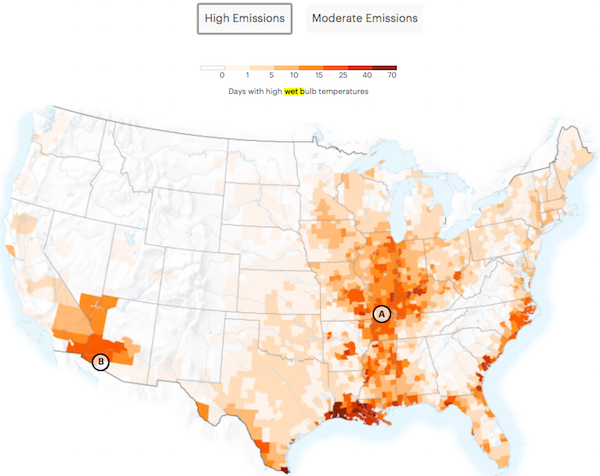 Interesting how the Missisippi River basin transforms to a weakness from a continental strength (though I wonder how river restoration would affect humidity; I’d guess favorably). So, coastal elites doing pretty well on their project to turn flyover into a teardown! Kidding. Partly. Pretty well, except for ocean rise, of course. I wonder how long before the Irvings start selling off the Unorganized Territories in Maine to, well, gentrifiers…. 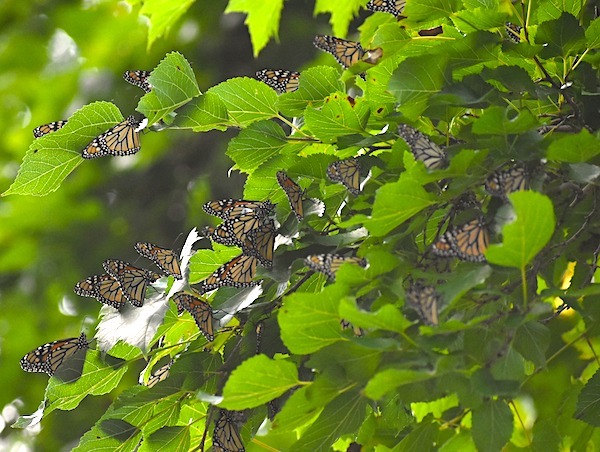 Bethany: he did this for like 15 minutes
Me: was there a moth up there?
Bethany: no
Me: oh pic.twitter.com/al7wQgWv1G