Yves here. Given that many who are convinced they are “long Covid” victims are treated skeptically by doctors, just as chronic Lyme disease patients often are, the data on this syndrome is even more spotty than on Covid-19 overall. But one estimate that there are as many as 70,000 in New York City alone should focus some minds, even before getting to the fact that this population appears to skew younger than Covid hospitalizations.

By Luca Powell, a J-Corps fellow from the Craig Newmark Graduate School of Journalism at CUNY, which is participating in “MISSING THEM,” THE CITY’s ongoing collaborative project to remember every New Yorker killed by COVID-19. Originally published at THE CITY on September 15, 2020 Maria Diaz, 31, says she still suffers from recurring fevers and chronic fatigue from the coronavirus. Courtesy of Maria Diaz

The illness was supposed to last for three weeks, doctors told her.

But weeks four through six of COVID-19 were the worst for Holly MacDonald. Her low-grade fever morphed into an all-around fatigue. She began having trouble speaking.

And when she stood up, her legs and feet turned purple.

“I’d walk too far and then I’d need to be in bed for three days,” said MacDonald, who is 29 and lives in Crown Heights. She had to take administrative leave from her job at a nonprofit where she builds social-media campaigns.

A month after getting sick in early March, MacDonald was back in the ER, frustrated as she tried to convince her doctors she was mired in her second month of what, she’d been told, was a three-week respiratory virus.

She’s still not fully recovered. MacDonald is one of upwards of 70,000 New Yorkers struggling with unexplained long-term symptoms of COVID-19, according to a range of estimates provided by several New York City-area doctors and hospitals contacted by THE CITY.

“The hidden number could be more,” said Dr. Zijian Chen, who directs Mount Sinai’s Center for Post-COVID Care. “We’re looking at patients who are still testing positive day to day, so this is a population that’s going to continue to grow.”

The growing numbers of so-called long-haulers underscore what patients and doctors describe as an increasing struggle on multiple fronts.

Patients who experience symptoms long after three weeks sometimes are hit harder by the physical ravages of the virus than when they first contracted COVID-19.

In some cases, patients say, their doctors don’t believe them. That can add to the struggle for those seeking to get their medical expenses covered — especially after losing work because of their illness or the pandemic-slammed economy.

The stories of some New York COVID-19 survivors have challenged early conceptions of COVID-19 as a three-week illness.

They are the stories of runners who now need wheelchairs and yoga teachers with debilitating fatigue. Discharged from the hospital, they now find support in a host of online support groups where they try to piece together what it means to live with the lingering disease.

Chen came up with the 70,000 estimate, he said, based on data available by the New York City Department of Health and the U.S. Centers for Disease Control and Prevention. His center, which is designed around treating “long-haulers,” has already encountered 400 such patients. These “long-COVID” cases, as the Mount Sinai center describes them, appear to occur randomly — there’s no demographic category that is more likely than another to be struck.

Patients come in reporting fatigue, shortness of breath and difficulty thinking clearly. In some cases, the symptoms arrived months after the worst of COVID illnesses were over.

“This disease can be very devastating,” Chen said. “And a lot of the symptoms aren’t easily explained. It’s not something we have established knowledge on.”

Viral infections like COVID-19 can cause post-viral syndromes — a monthslong phenomena characterized by constant tiredness and trouble sleeping.

One of the few road maps for navigating the aftereffects of COVID-19 is the SARS epidemic from 2002. Studies found that some patients developed “Chronic post-SARS,” a syndrome that lasted for up to 18 months.

It feels “almost like a concussion,” MacDonald said. “‘Any kind of activity — mental or physical — triggers me into headaches that last three days.”

MacDonald suspects her COVID has developed into Postural Orthostastic Tachycardia Syndrome, also known as POTS, which can sometimes stem from viral infections. These are less common, but they do explain more severe symptoms, like her purple feet.

Hard to Return to Work

“It’s not like you’re going to fix it with one little pill and it’s all going to go away and you’ll be hunky-dory,” Hope said. “You’ll have to deal with multiple visits to different physicians. It’s much more complicated.”

At Montefiore, many of Hope’s COVID-19 patients say they feel like they’ve been knocked out of their normal rhythms.

“A lot of them will talk about just not being who they are,” Hope said. “It’s so completely inconsistent with how they lived their life before this.”

MacDonald said she’s lucky because she works at a computer most of the day.

“If I was working a physical job, forget it,” MacDonald said.

In early March, Maria Diaz became one of the first New Yorkers known to have contracted COVID-19.

Diaz, who teaches at Brooklyn’s Poly Prep Country Day School, left work on March 3 with a 105-degree fever. Well into the summer, she reported suffering fevers every few days, as well as chronic fatigue.

What baffles her is that doctors initially diagnosed her case as “mild.”

“What I was told was that this was an upper respiratory infection,” said Diaz, 31. “But I was having all these other symptoms.”

In some cases, the enduring symptoms were worse than the initial ones.

“Sometimes it’s the people who have the milder versions of this infection that end up having chronic versions,” said Lauren Stiles, an assistant professor of neurology at Stony Brook University who studies autonomic disorders.

The possibility of losing work and health insurance is doubly problematic for patients who’ve been in and out of hospitals since the pandemic began.

In March, many private insurers committed to waiving patient shares of costs for COVID-19 treatment. Those protections mean no out-of-pocket expenses for people with insurance. To qualify, a hospital needs to code a patient’s bill as COVID-19-related, otherwise insurers won’t take it.

For some providers, like Aetna, those protections expire on Sept. 30. Aetna did not respond to requests for comment.

Others, like Empire BlueCross BlueShield, recently extended that deadline to Dec. 31. A spokesperson said the insurer had identified nearly 2,000 patients with COVID-like symptoms through its “Post Acute-Care Program.”

“We are closely following the pandemic and monitoring the needs of our members, particularly those recovering from COVID-19,’’ said Dr. Craig Hersh, chief medical officer of Empire BlueCross BlueShield. 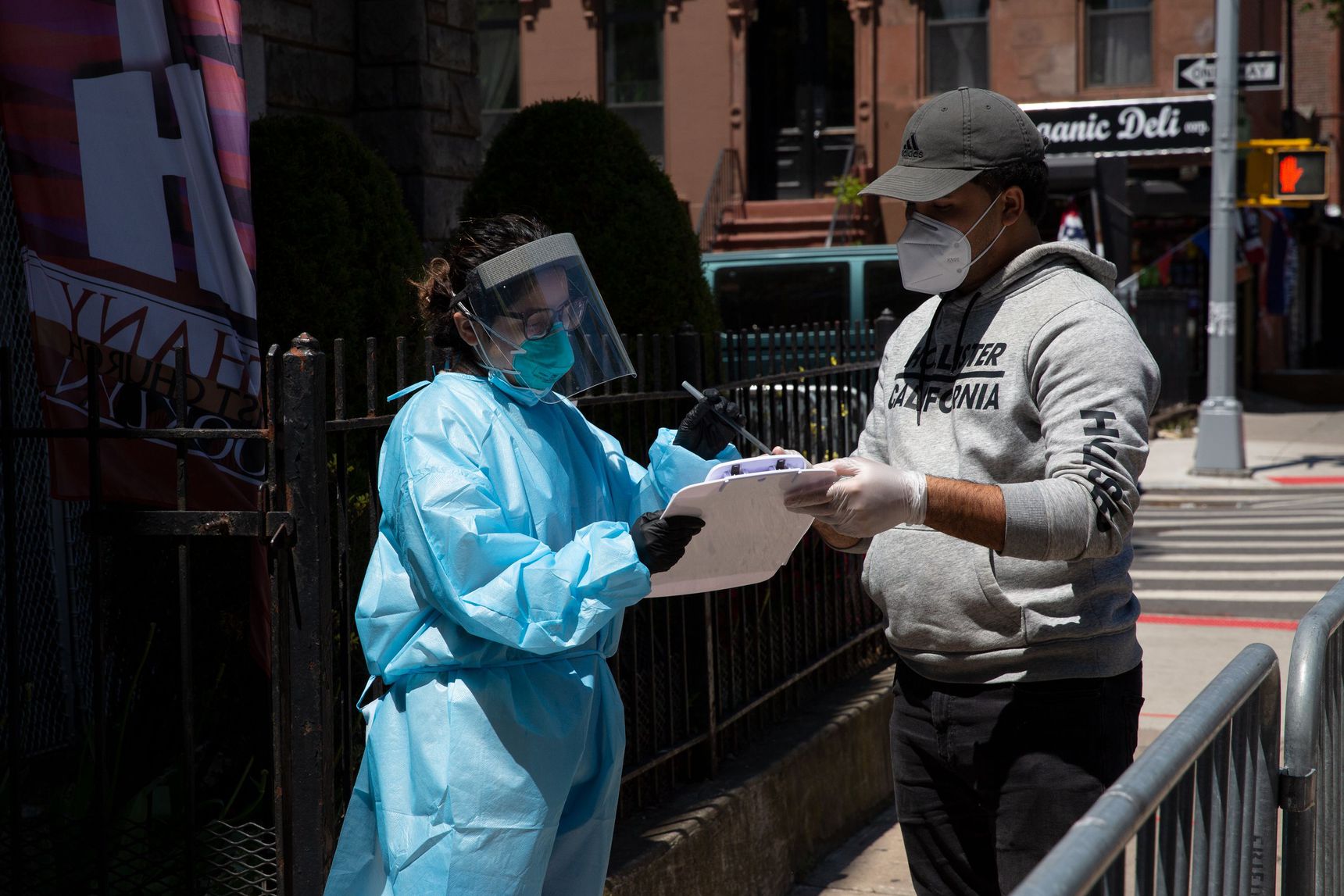 A man signs up for free coronavirus testing in Bedford-Stuyvesant. Ben Fractenberg/THE CITY

“Patients tell us their insurance itself is expiring, either through their work because of loss of work, or because they’re on COBRA,” Chen said. “Depending on how this pandemic turns and patients’ ability to work, their ability to get care is really going to be affected.”

And long-term symptoms still aren’t widely viewed as part of the disease, in part because some patients, especially ones infected in the early days of the crisis and at its height, were never tested for the coronavirus. Many “long haulers” say they’ve also test negative for antibodies long their initial illness, despite their symptoms.

“What’s really challenging is [the patients] look completely normal,” said Stiles, who has an autonomic disorder herself.

“It’s hard sometimes even for doctors to understand. And it doesn’t lead to a lot of compassion for [patients].”’

Both Hope and Chen said they were concerned about the capacity of hospitals in New York to treat long-haulers as the number of patients they treat continues to grow. Mount Sinai’s center struggles to staff enough doctors to meet patient demand, Chen said.

“That’s going to be a very, very large burden, to the health system, to the economy,” said Chen, “And at some point, it’ll be unsustainable.”

This story was originally published by THE CITY, an independent, nonprofit news organization dedicated to hard-hitting reporting that serves the people of New York.