Latest News
Home /When the Republican Party Was Sane 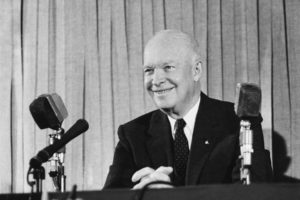 When the Republican Party Was Sane
President Eisenhower inherited a GOP that looked much like today’s—but he tamed the extremists and led as a moderate conservative.
Bruce Bartlett, TNR, August 24, 2020

After five losses in a row, Republicans were desperate to regain the White House following the 1948 election, when Harry Truman surged in the polls at the eleventh hour to defeat GOP standard bearer Thomas E. Dewey. Many party strategists looked to General Dwight Eisenhower, who was enormously popular for his service as Supreme Commander of the allied armies in Europe during World War II, to lead them out of political purgatory.

But there was a question as to whether Ike was actually a Republican. He was so avowedly apolitical that a Gallup Poll in 1949 found that only 36 percent of Americans regarded him as one; 22 percent considered him a Democrat while 42 percent weren’t sure what party he belonged to.

Eisenhower was in fact a true centrist who really belonged to neither party. As a career military officer, he had carefully avoided all political activity. After his retirement from active service, he wrote in his diary on January 1, 1950, “I do not want a political career; I do not want to be publicly associated with any political party.”

However, the Korean War, which began on June 25, 1950, pushed Eisenhower over to the GOP. He felt that Truman’s conduct of the war was poor and that his national security policy was wanting. As Eisenhower wrote in his diary on November 6, 1950, Truman was “a fine man who, in the middle of a stormy lake, knows nothing of swimming. Yet a lot of drowning people are forced to look to him as a lifeguard.”

A key impediment to Eisenhower’s nomination, however, was that the Republican Party was just as nuts then as it is today. One only has to read the party’s 1952 platform to get a sense of its dubious grasp of political reality. You’d think that the Communist Party, rather than the Democratic Party, had been in power for the previous 20 years. When it came to the platform’s depiction of the Democrats, it anticipated the paranoid transports of today’s Trumpists:

We charge that they have arrogantly deprived our citizens of precious liberties by seizing powers never granted.

We charge that they work unceasingly to achieve their goal of national socialism.

We charge that they have disrupted internal tranquility by fostering class strife for venal political purposes.

We charge that they have choked opportunity and hampered progress by unnecessary and crushing taxation.

They claim prosperity but the appearance of economic health is created by war expenditures, waste and extravagance, planned emergencies, and war crises. They have debauched our money by cutting in half the purchasing power of our dollar.

We charge that they have weakened local self-government which is the cornerstone of the freedom of men.

We charge that they have violated our liberties by turning loose upon the country a swarm of arrogant bureaucrats and their agents who meddle intolerably in the lives and occupations of our citizens.

We charge that there has been corruption in high places, and that examples of dishonesty and dishonor have shamed the moral standards of the American people.

We charge that they have plunged us into war in Korea without the consent of our citizens through their authorized representatives in the Congress, and have carried on that war without will to victory.

Right-wingers thought that the welfare state desperately needed to be rolled back, with Social Security and the rest of the New Deal repealed. But this was extraordinarily naïve. It was obvious that there was broad support for Social Security even within the GOP. The 1950 amendments to the basic provisions of the program expanded Social Security benefits and passed with overwhelming Republican support; only two Republicans voted against the bill in the Senate and just one in the House. Senator Robert Taft of Ohio, leader of the conservative wing of the GOP, was among the ayes. The 1952 amendments further increased benefits. Again, the legislation passed with vast Republican support; just 20 GOP members voted against it in the House and none did in the Senate. In a letter to his brother Edgar, Eisenhower made clear his belief that it was stupid to even try to repeal the welfare state:

Should any political party attempt to abolish Social Security, unemployment insurance, and eliminate labor laws and farm programs, you would not hear of that party again in our political history. There is a tiny splinter group, of course, that believes you can do these things. Among them are H. L. Hunt … a few other Texas oil millionaires, and an occasional politician or businessman from other areas. Their number is negligible and they are stupid.

The Taft wing also wanted to sharply scale back America’s foreign commitments and return to prewar isolationism. Again, this was naïve. Once the Soviet Union got nuclear weapons, there was simply no going back. Conservatives had to content themselves with agitating for the Bricker Amendment, a proposed constitutional amendment that would prevent treaties from overriding the Constitution. Of particular concern was the possibility that the United Nations could somehow intervene in our domestic affairs—a fictitious threat that still animates right-wingers to this day.

Despite the acute mismatch between platform and candidate, the GOP’s desire to win was so strong that most Republicans overcame whatever reservations they had about Eisenhower and named him as their standard bearer. He won easily over the untelegenic Democrat, Governor Adlai Stevenson of Illinois, in the first campaign of the television age.

Almost immediately upon taking office, Eisenhower dissed the right flank of his party by throwing cold water on its desire for a big tax cut. He said at his first presidential press conference:

Whether we are ready to face the job this minute or any other time, the fact is there must be balanced budgets before we are again on a safe and sound system in our economy. That means, to my mind, that we cannot afford to reduce taxes, reduce income, until we have in sight a program of expenditures that shows that the factors of income and of outgo will be balanced. Now that is just to my mind sheer necessity.

At a 1954 press conference, Eisenhower gave what is probably the most succinct statement of his philosophy and perspective. Said Eisenhower:

I think it would be safe to say this: when it comes down to dealing with the relationships between the human in this country and his government, the people in this administration believe in being what I think we would normally call liberal; and when we deal with the economic affairs of this country, we believe in being conservative.

Now, I quite admit that there can be no distinct line drawn between the economy and the individual, and I am ready to say also that such a little capsule sort of description of an attitude can be pulled to pieces if you want to. But, in general, that is what we are trying to do. The difference here is that the government’s position, the government’s growth, the government’s activity under this new administration is to try to have its functions in conformity with the Constitution of this country; but in doing so, to make certain that the individuals realize that government is a friend and is not their enemy in any way.

That same year, Eisenhower moved against the ultra-right-wing Senator Joseph McCarthy of Wisconsin, who was convinced that the federal government was riddled with actual communists—a precursor to today’s Republican obsession with the “deep state.” By the end of the year, McCarthy had been censured by the Senate and his power broken, a victory for Eisenhower’s behind-the-scenes maneuvering.

Conservatives were, of course, apoplectic about Eisenhower’s moderation. Frank Meyer probably spoke for most American conservatives when he said in March 1954, “There seems to be little to distinguish the Eisenhower administration from its predecessors in the fight against creeping collectivism.” By the end of the year, Robert Welch, later founder of the ultra-right-wing John Birch Society, began writing a book that accused Eisenhower of being a de facto communist and General George Marshall, who administered the great postwar European relief program that bears his name, of being an actual communist.

By 1956, the Republican Party platform was celebrating its accomplishments in expanding the welfare state. It’s hard to imagine a Republican platform today taking credit for these things:

Social Security has been extended to an additional 10 million workers and the benefits raised for 6 1/2 million. The protection of unemployment insurance has been brought to 4 million additional workers. There have been increased workmen’s compensation benefits for longshoremen and harbor workers, increased retirement benefits for railroad employees, and wage increases and improved welfare and pension plans for federal employees.

The platform even advocated “equal pay for equal work regardless of sex,” something Republicans in Congress vote against today. And the platform said that the Republican Party supported the Supreme Court’s Brown decision, which desegregated public schools and “commits itself anew to advancing the rights of all our people regardless of race, creed, color or national origin.”

“We are determined that our government remain warmly responsive to the urgent social and economic problems of our people,” the platform said. “Government must have a heart as well as a head.”

Although Eisenhower got the reputation of being a do-nothing president, that view has been sharply revised by historians over the last 35 years. He is now viewed as a much more active and shrewd leader than he appeared to be at the time. As Ronald Reagan once said, “For all the jokes about golf playing, he did a far, far better job of handling that office than anyone realized.”

Even some conservatives are revising their long-held, Taft-driven disdain for Eisenhower. A recent article in National Review by one of its editors read, “Eisenhower may have sometimes called himself a progressive, but his bedrock priorities—a strong military, balanced budgets, and limited government—are classical conservatism.” Even Newt Gingrich has had good things to say about Eisenhower.

In the end, Eisenhower’s greatest accomplishment wasn’t so much what he did as what he didn’t do. When he was elected president in 1952, he brought with him Republican control of both the House and Senate. And many of those newly elected members were among the party’s firebrands—very similar to the Tea Party class of 2010. Had he wanted to, Eisenhower probably could have repealed much of the New Deal. But he didn’t. By the time the next Republican president took office in 1969, Democrats had solid control of Congress and there was no movement outside the far-right-wing political fringe to scale back the welfare state. Indeed, Richard Nixon, who served as Eisenhower’s vice president, greatly expanded it.

On September 17, a memorial to Eisenhower will open adjacent to the National Mall in Washington. There is no indication that Donald Trump plans to attend the dedication. This is just as well. Everything he believes and does is an affront to Eisenhower’s life, character, and humanity.