Lambert here: They call it an investment vehicle because it’s designed to drive off with your money.

Shares of the electric truck maker Nikola that hasn’t made a single truck — not even a working prototype that uses its own technology — started trading on June 4, 2020, through a reverse merger with special-purpose acquisition company (SPAC) VectoIQ Holdings – the boom in SPACs being another phenomenon that shows how nuts this market has gotten. By June 9, Nikola’s market capitalization had vaulted to $29 billion as day-trader fans were going nuts over it, trying to get rich quick on this supernatural phenomenon.

This morning, the company announced in an astounding SEC filing that CEO and founder Trevor Milton, who is immersed in fraud allegations, was out, and the way it was done, namely effective yesterday, September 20, suggests that this was an orchestrated firing over the weekend, dressed up as “voluntary.” Some excerpts from the SEC filing:

There are some minor claw-back provisions in the filing:

To help preserve capital and assist the Company in retaining world-class talent to succeed the Executive, the Executive hereby relinquishes each of the following:

(ii) any right or claim to enter into a two-year consulting agreement with an annual fee of $10,000,000 and

(iii) any other right and entitlement that the Executive may have or claim pursuant to the Employment Arrangement, except as set forth in this Agreement.

Milton was forced to announce his departure in the social media:

Following the Effective Date, the Executive will promptly revise the Executive’s employment status on social media, including LinkedIn and other social media sites so that the Executive is no longer identified as holding any position with the Company or serving on the Board.

Milton has to get approval before posting anything on the social media about the company:

And this is what Milton did this morning, when he tweeted – presumably with approval of said Chief Legal Officer: “I will be cheering from the sidelines with you. Your greatest fan.” 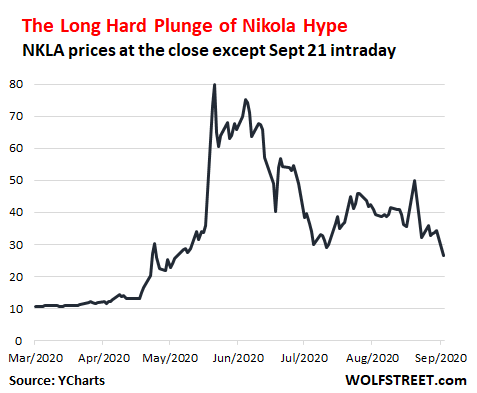 On September 10, Nikola got hammered by detailed allegations of short-seller Hindenburg Research that the company was “an intricate fraud built on dozens of lies over the course of its Founder and Executive Chairman Trevor Milton’s career.” In explaining its short position on the stock, Hindenburg Research summarized: “We have never seen this level of deception at a public company, especially of this size.”

Then Monday last week, Bloomberg, citing sources, reported that the SEC was examining Nikola “to assess the merits” of the fraud allegations of Hindenburg Research.

Milton had responded to the allegations with some tweets, that made things only worse. The company, still on Monday, came out with a rebuttal, that didn’t help matters either.

The deal with GM, announced on September 8 – though the media and Wall Street analysts oohed and aahed over it and caused the shares of both companies to soar briefly – raised red flags about the Nikola’s so-called industry-leading core technology upon which all the hype had been built, namely its battery and fuel cell technology that were supposed to power its trucks.

Not only would GM provide the core technology for those trucks, Nikola also disclosed that GM would “engineer, validate, homologate and build the Nikola Badger for both the battery electric vehicle and fuel cell electric vehicle variants as part of the in-kind services.”

So that leaves just the name that GM was apparently interested in and the hype surrounding Nikola. And true to form, following the announcement of the partnership, GM’s shares jumped 10%. This morning, GM’s shares are down 7%, and below where they’d been before the announcements. And it’s uncertain what remains of the value of Nikola’s tainted name. What is certain is that this whole entire Nikola phenomenon was only possible in a market gone willfully blind and nuts.

Selling classic cars during the Pandemic is hard – and even harder at the high end. Affordable Classics rise, American Muscle Cars fall, Ferraris flat, after big drops earlier this year. Beautiful machines all of them. Read… Asset Class of Vintage Cars During the Pandemic: Sales at High End on Ice, After Steep Price Drops Earlier in the Year