This is Naked Capitalism fundraising week. 1294 donors have already invested in our efforts to combat corruption and predatory conduct, particularly in the financial realm. Please join us and participate via our donation page, which shows how to give via check, credit card, debit card, or PayPal. Read about why we’re doing this fundraiser, what we’ve accomplished in the last year, and our current goal, expanding our reach.

Yves here. While much of the material in this article is familiar to Naked Capitalism readers, it’s useful to have it all in one piece, as well as having updates on some topics, such as the high death cost of Sweden’s low-intervention Covid-19 policy. It’s also suitable for sending to friends and family members who may be behind the curve on the “herd immunity” topic.

One issue the article finesses badly, however, is the percentage of people who have to have been infected or successfully vaccinated for Covid-19 infections to slow to a halt. The highest level they suggest is 70%. However, one solid study found that the uncontrolled R0 for Covid 19 is over 5, which means the level of the population that would need to be vaccinated or previously infected would be 85%. Another issue the article breezes past is how long those who’ve been vaccinated or infected are immune. Recall that coronavirus antibodies don’t appear to confer long-lasting immunity. For the common cold, it’s only six month, and for the longest-lived, MERS, it’s 34 months.

By Aneri Pattani, a Correspondent at Kaiser Health News, who previous reported for Spotlight PA, The Philadelphia Inquirer, WNYC (New York City’s NPR station) and The New York Times. She was a 2019 recipient of the Rosalynn Carter Fellowship for Mental Health Journalism. Originally published at Kaiser Health News 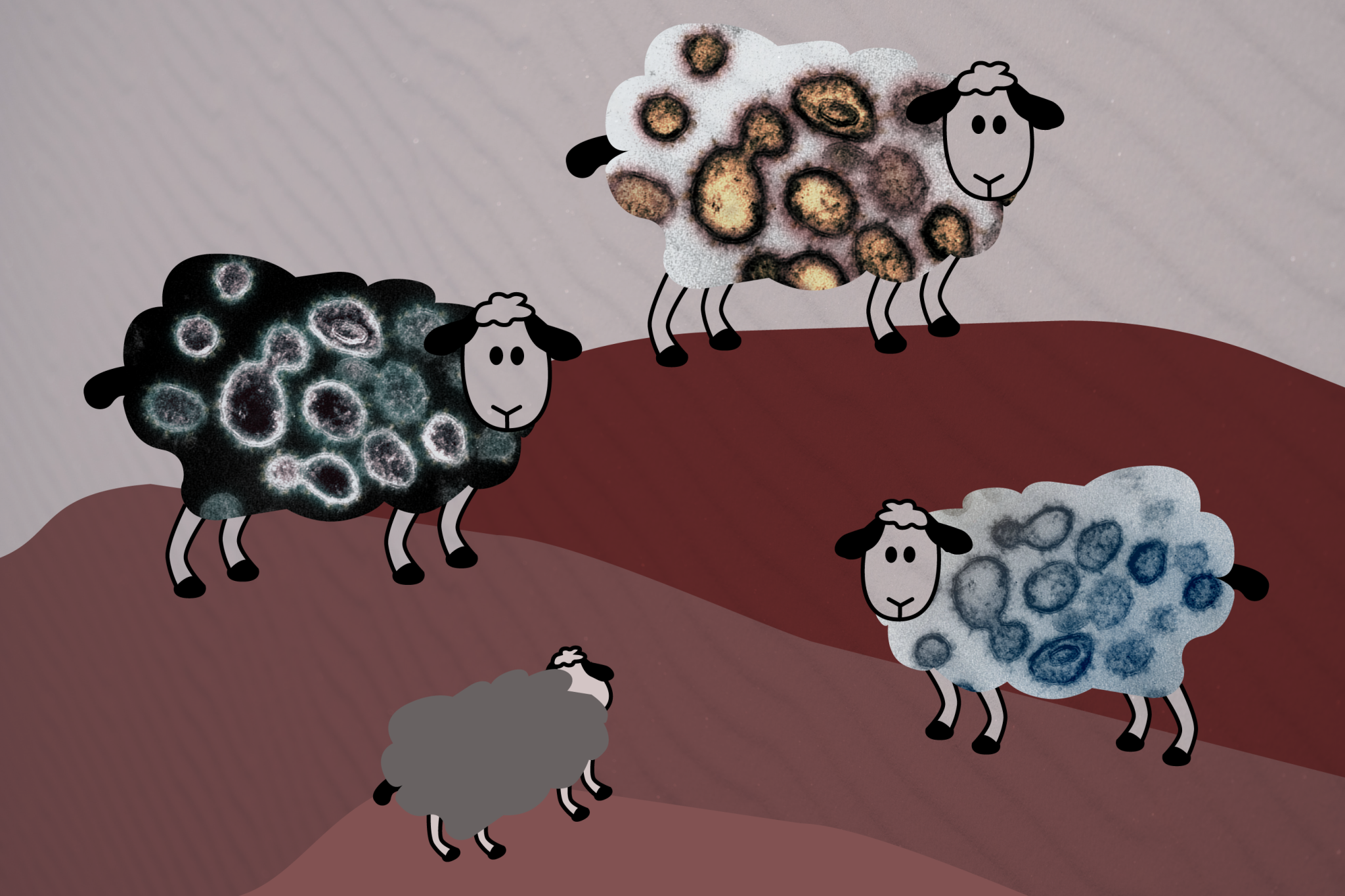 It starred in many headlines last month, when reports surfaced that a member of the White House Coronavirus Task Force and adviser to the president, Dr. Scott Atlas, recommended it as a strategy to combat COVID-19. The Washington Post reported that Atlas, a health care policy expert from the Hoover Institution of Stanford University, suggested the virus should be allowed to spread through the population so people build up immunity, rather than trying to contain it through shutdown measures.

At a town hall event a few weeks later, President Donald Trump raised the idea himself, saying the coronavirus would simply “go away,” as people developed “herd mentality” — a slip-up that nonetheless was understood to reference the same concept.

And as recently as last week, Sen. Rand Paul (R-Ky.) sparked a heated debate at a committee hearing when he suggested that the decline in COVID cases in New York City was due to herd or community immunity in the population rather than public health measures, such as wearing masks and social distancing. Dr. Anthony Fauci, the top U.S. infectious disease official, rebuked Paul, pointing out that only 22% of the city’s residents have COVID antibodies.

“If you believe 22% is herd immunity, I believe you’re alone in that,” Fauci told the senator.

All this talk got us thinking: People seem pretty confused about herd immunity. What exactly does it mean and can it be used to combat COVID-19?

An Uncertain Strategy With Great Cost

Herd immunity, also called community or population immunity, refers to the point at which enough people are sufficiently resistant to a disease that an infectious agent is unlikely to spread from person to person. As a result, the whole community — including those who don’t have immunity — becomes protected.

People generally gain immunity in one of two ways: vaccination or infection. For most diseases in recent history — from smallpox and polio to diphtheria and rubella —vaccines have been the route to herd immunity. For the most highly contagious diseases, like measles, about 94% of the population needs to be immunized to achieve that level of protection. For COVID-19, scientists estimate the percentage falls between 50% to 70%.

Before the COVID pandemic, experts can’t recall examples in which governments intentionally turned to natural infection to achieve herd immunity. Generally, such a strategy could lead to widespread illness and death, said Dr. Carlos del Rio, an expert in infectious disease and vaccines at the Emory University School of Medicine.

A new, large study found fewer than 1 in 10 Americans have antibodies to SARS-CoV-2, the virus that causes COVID-19. Even in the hardest-hit areas, like New York City, estimates of immunity among residents are about 25%.

To reach 50% to 70% immunity would mean about four times as many people getting infected and an “incredible number of deaths,” said Josh Michaud, associate director of global health policy at KFF. Even those who survive could suffer severe consequences to their heart, brain and other organs, potentially leaving them with lifelong disabilities. (KHN is an editorially independent program of KFF.)

“It’s not a strategy to pursue unless your goal is to pursue suffering and death,” Michaud said.

What’s more, some scientists say natural immunity may not even be feasible for COVID-19. While most people presumably achieve some degree of protection after being infected once, cases of people who recovered from the disease and were reinfected have raised questions about how long natural immunity lasts and whether someone with immunity could still spread the virus.

Even the method scientists are using to measure immunity — blood tests that detect antibodies to the coronavirus — may not be an accurate indicator of who is protected against COVID-19, said Dr. Stuart Ray, an infectious disease expert at the Johns Hopkins University School of Medicine.

With so many unanswered questions, he concluded: “We can’t count on natural herd immunity as a way to control this epidemic.”

Vaccines, on the other hand, can be made to trigger stronger immunity than natural infection, Ray said. That’s why people who acquire a natural tetanus infection, for example, are still advised to get the tetanus vaccine. The hope is that vaccines being developed for COVID-19 will provide the same higher level of immunity.

But What About Sweden?

In the political debate around COVID-19, proponents of a natural herd immunity strategy often point to Sweden as a model. Although the Scandinavian country imposed fewer economic shutdown measures, its death rate is less than that in the U.S., Paul said at Wednesday’s Senate hearing.

But health experts — including Fauci during the same hearing — argue that’s a flawed comparison. The U.S. has a much more diverse population, with vulnerable groups like Black and Hispanic Americans being disproportionately affected by the coronavirus, said Dr. Jon Andrus, an epidemiology expert at the George Washington University Milken Institute School of Public Health. The U.S. also has greater population density, especially on the coasts, he said.

When compared with other Scandinavian countries, Sweden’s death toll is much higher. It has had 5,880 deaths linked to COVID-19 so far, according to data from Johns Hopkins University. That’s nearly 58 deaths per 100,000 residents — several times higher than the death rates of 5 or 6 per 100,000 in Norway and Finland. In fact, as a result of COVID-19, Sweden has recorded its highest death toll since a famine swept the country 150 years ago. And cases are on the rise.

Despite that level of loss, it’s still unclear if Sweden has reached the threshold for herd immunity. A study by the country’s public health agency found that by late April only 7% of residents in Stockholm had antibodies for COVID-19. In other Swedish cities, the percentage was even lower.

Those findings mirror other studies around the globe. Researchers reported that in several cities across Spain, Switzerland and the U.S. — with the exception of New York City — less than 10% of the population had COVID-19 antibodies by June, despite months of exposure and high infection rates. The results led commentators in the medical research journal The Lancet to write, “In light of these findings, any proposed approach to achieve herd immunity through natural infection is not only highly unethical, but also unachievable.”

Herd Immunity Is Still Far Off

The bottom line, medical experts say, is that natural herd immunity is an uncertain strategy, and attempts to pursue it could result in a slew of unnecessary deaths. A vaccine, whenever one becomes available, would offer a safer route to community-wide protection.

Until then, they emphasize there is still plenty to do to counter the pandemic. Wearing masks, practicing social distancing, hand-washing and ramping up testing and contact tracing have all proven to help curb the virus’s spread.

“As we wait for new tools to be added to the toolbox,” Andrus said, “we have to keep reminding ourselves that there are measures in this very moment that we could be using to save lives.”