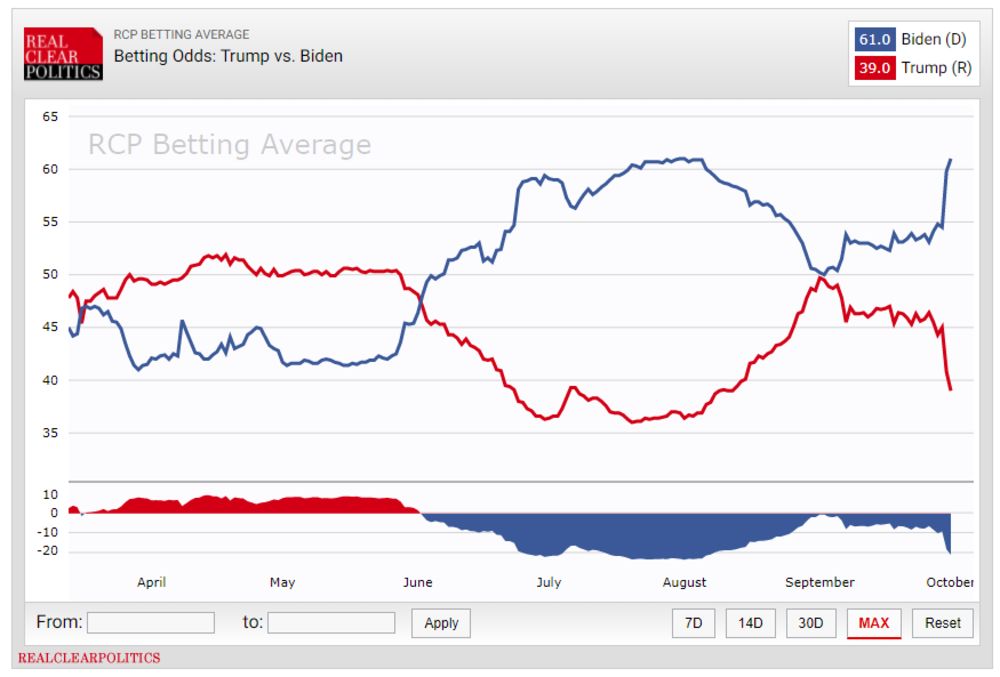 About 1am, my wife shook me awake to the shocking news that President Trump was tweeting he and Melania tested positive for Covid-19.

Hope Hicks was rumored to have tested positive on Thursday, and she had spent lots of time in close proximity to POTUS, FLOTUS, and the rest of the White House staff. Assume these tests are not false positives – yes, there is a big ~30% probability for any single test, but three people in a cluster all testing positive significantly reduces the probability of a false positive to about 12.5%. If they ran a second test to confirm the odds fall to about 1%.

The immediate response was for news feeds to light up, and for stock futures to fall about 1.5%. I will leave others to write the political story about the president’s failure to take Covid-19 seriously, to protect the country, and to protect himself.

There will be rumors and innuendo and baseless theorizing: Look for the conspiracy theory to surface how wanting to avoid a disastrously embarrassing defeat, POTUS wants an exit before elections day, along with a Pence pardon. Sorry, but this crew is far too incompetent and  leaky to pull something like that off.

What is worth discussing is the reaction to the White House cluster-infection in the betting markets, which lots of people track for insight into the odds of re-election. The UK markets – Paddy Power, Ladbrokes, and Betfair were suspended, while others like PredictIt and FTX stayed live.

Note the way the betting markets are structured involve some complications in outcome: It is not merely which side wins, but which person wins. Beyond the shift in outcome shown above as a result of the first debate, there is also embedded in the betting markets a mortality forecast: A 74 year old border-line obese man has a relatively high risk of fatality. Part of the betting shift against Trump now includes the possibility of a Pence victory.

I have researched and written extensively on the failure of prediction markets. Before getting too worked up about these, or polls in general, you should understand some of the complexities involved in when they succeed and why they often do not.

There are several primary reasons for these failures: The first is incentives — there simply is not enough capacity to attract real capital, along with its resources research, and intellectual power. Unlike say capital markets for stocks or bonds, the infrastructure, regulatory oversight, and overall capacity simply is not there.

The other failure point is that when there is a lack of diversity of ideas, these markets fail. Think of the bettors here as all participating in a giant poll. To be more accurate, you want the polling group to be as representative of the electorate that will be voting as possible. The more the traders as a group deviate from the electorate, the less accurate the poll (i.e., betting) tends to be.

There is one other failure point worth discussing that applies to betting markets and polls alike: It is the tendency to treat these events as binary problems, rather than complex, multivariate phenomena. Not the outcome, which normally is binary, but rather the elements that will lead to that outcome.

Consider the simplistic question of “Who Will You Vote For?” in polls. That might capture sentiment at any given moment, but it misses some much bigger issues.

What are the odds that the person responding to a pollster:

-Is part of a representative pool that is similar to the electorate?

-Will or won’t change their mind?

-Is responding honestly to the questions?

-Will actually cast a vote at all?

The variables are many, and they are not neatly captured by polling. In my mind, the biggest variable being which side gets out the vote more effectively. Not all elections are as portent and motivating as this one is.

Most elections, the side that does the better job of getting out the vote — especially in those swing states — has the best chance of winning.