I am finalizing my Q4 2020 conference call for RWM clients, and it seems that all anyone wants to discuss is the upcoming election. It’s the single biggest question that comes up as to markets, economy, inflation, deficit, yield, etc.

Here are the random thoughts I am organizing in my head:

• Markets have done fine under Democrats as well as Republicans: I keep seeing data that shows a slight market advantage for when the President is a Democrats, but that is due in large part to Hoover and the Great Depression (see chart below). Back that out and its a wash.

Regardless, if you want to draw any conclusion, understand the sample set of the 2 dozen presidents over the past century is way too small. Let’s revisit this question in 3020, when we have sufficient data to work with.

To learn more on why politics does not matter to markets, see this: Politics & Investing). 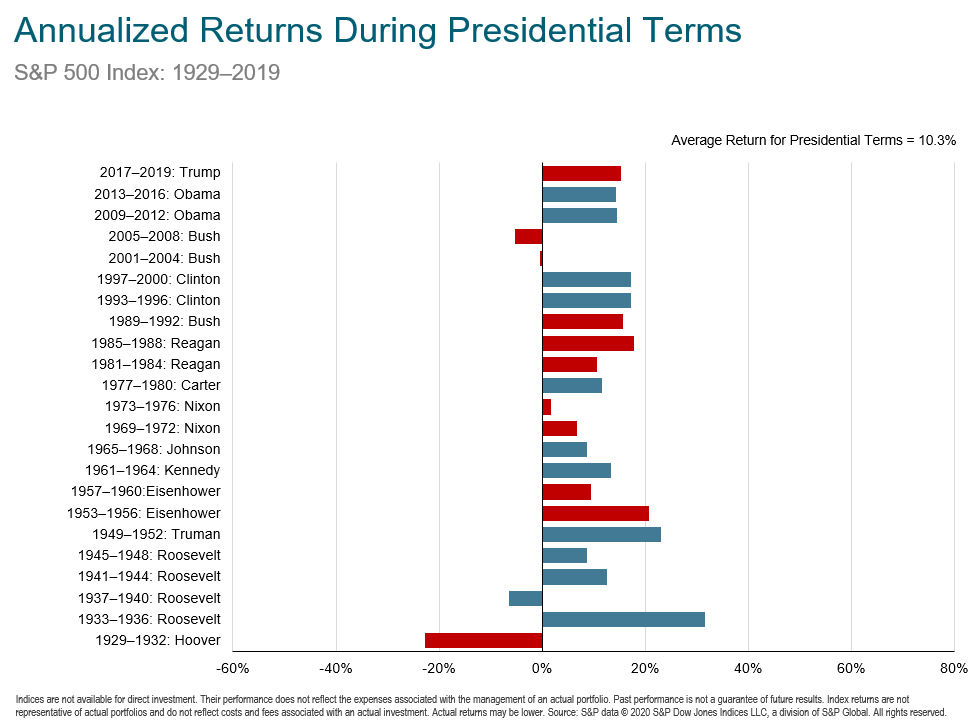 • 2016 was the low probability outcome: The President drew to an inside straight in 2016, via 80,000 votes in three states: Michigan, Pennsylvania and Wisconsin. For the incumbent to get re-elected, he needs to repeat that streak.

Those states current polling averages are WI Biden 6.2%; PA Biden 6.6%; MI Biden 8.0%. Not impossible to overcome, but certainly challenging with 27 days to go.

• 3rd Party Candidates: Recall 2016 third-party candidates, who collectively won ~4% of the vote in Pennsylvania and 6% of the vote in Michigan and Wisconsin in 2016, enough to sway those races. In Florida, the margin of victory was a 1.2%, while Gary Johnson got 2.2% and others got another 1.8%. This year, there are no major party 3rd party candidates on the ballot in most states. No wonder the GOP supported a Kanye West run.

• It is (still) the economy, stupid: Coined by James Carville in 1992, this rule suggests that people vote their pocketbooks first and foremost. It was the incumbent’s strongest issue, albeit one that was eroding during the recession that began in March and continue to this day.
As of yesterday, even that advantage disappeared, as the two are now tied:

“In a CNN poll released Tuesday, Trump and former Vice President Joe Biden were tied among registered voters at 49% apiece on the question of who would handle the economy better. Among likely voters, Biden gets 50%, compared with 48% for Trump, a statistical dead heat . . . The findings represent a sharp drop in support for Trump in what had previously been his greatest strength. In May, 54% of registered voters said Trump would handle the economy better, compared with 42% for Biden.”

The caveat: its only one poll, and these outliers should be viewed suspiciously until confirmed by other surveys.

• Re-elections Differ from Non-Incumbent Elections: Last election, you could credibly make the argument that candidate Trump was a successful businessman, a strong and competent leader who was a DC outsider. Those tales no longer carry much sway beyond the base, which began as a political movement and now more closely resembles a death cult.

Re-elections are referendums on the incumbent: Ronald Reagan famously filleted Jimmy Carter by asking the simple question “Are you better off today than you were 4 years ago?” That is a tough hurdle for the incumbent to overcome.

• A Blue Wave is Good for Markets Short-Term: I expect to see at least 3 different stimulus plans ranging from 1 to 10 trillion dollars: Covid Stimulus (and mask mandate / 2 week lockdown); Infrastructure bill, and Green Climate plan. (but only with control of House Senate and White House).

I do not expect this to happen, but then again, almost nothing that happened in2020 was expected (except for this).

• 269–269 Electoral College Tie: Did you know that in 1800, the outcome of the Presidential electoral college voting between Thomas Jefferson and Aaron Burr resulted in a tie? When that happens, the Constitution throws it to House of Representatives, where each state’s congressional caucus gets a single vote. (Jefferson won). 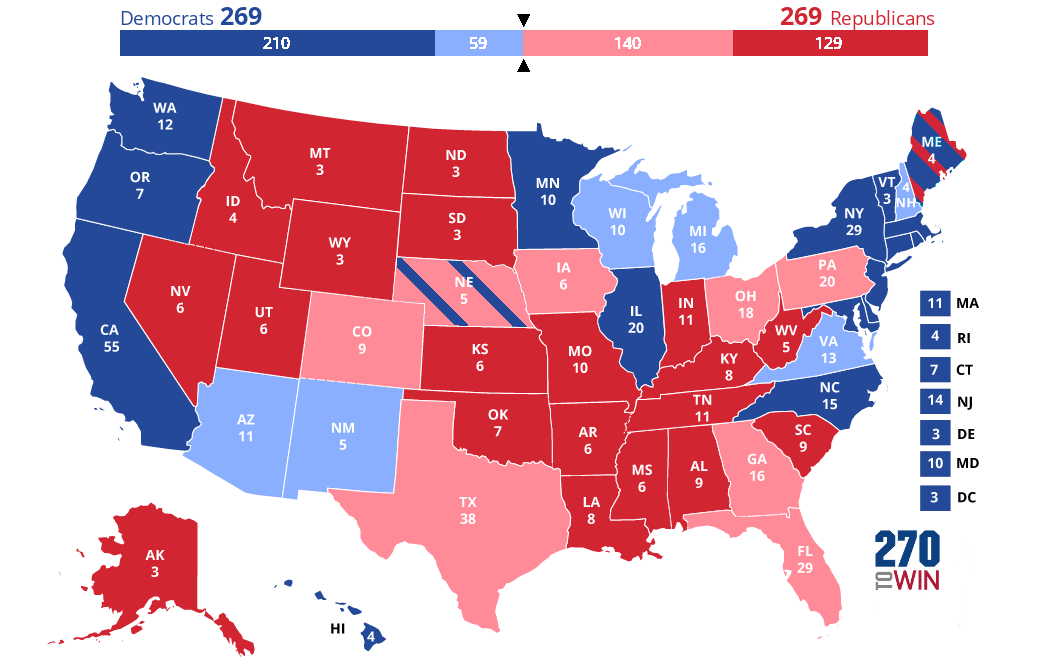 • Beware Hindsight Bias: After the fact, we have a tendency to create narratives that make sense of random and unexpected outcomes. Recall the tales of Steve Bannon as political genius uniquely in touch with the ignored parts of the voting public. That narrative seems to be holding less sway these days, especially given his arrest for Fraud allegedly for embezzling private funds raised to build the Border Wall.

• What About 2018? Pundits all seem to be suffering from the Recency Effect and cannot get past the 2016 election results. At the same time, I see and hear almost nothing about the giant Mid-term 42 seat sweep in 2018; I suspect that will be more telling than 2016 was.

What Do Stock Markets Say About Presidential Elections? (July 2, 2020)