There have been multiple sightings of a hairy, venomous caterpillar in Virginia CNN (dk).

Monkey ‘Gang Wars’ Keep Killing People in India Vice. What is with the showrunners on this timeline? (Oh, deforestation is one cause.)

Blockchain, the amazing solution for almost nothing The Correspondent. Except prosecution futures, as Yves has pointed out.

The Core of the ECB’s New Strategy Project Syndicate

IMF chief Kristalina Georgieva: ‘The fund needs to have a big bazooka’ FT

Steps for Reducing COVID Transmission (GoogleDoc) Cyrus Maher, UCSF. This is the must-read for the week. It’s not only a review of the literature, it’s packed with useful, pragmatic information, and very simply and clearly written. Slide 11: Aerosol FTW; slide 20: the “Swiss Cheese” model; plus a series of slides on preventing exposure, reducing exposure, and improving your odds if you are exposed starting at slide 24; see especially slide 48. (Caveat lector: There is a pitch to enroll in UCSF’s clinical trial.) Could some kind soul with a Google account download this document as a PDF and mail it to me? Address in Water Cooler beneath plant. Thanks!)

How SARS-CoV-2 disables the human cellular alarm system Phys.org. “The Guttman lab discovered that SARS-CoV-2 proteins interfere with this whole process [of cellular protein production] at multiple stages. Some of the virus’s proteins prevent mRNA from being fully spliced and properly assembled. Others plug up the ribosome so that it cannot form new proteins. Still other SARS-CoV-2 proteins interfere with the signal recognition particle and block protein transport.” Includes a diagram of the three stages:

The above is the human-readable report. Below is the original from Cell. Important:

Remdesivir for the Treatment of Covid-19 — Final Report NEJM. From the Conclusion: “Our data show that remdesivir was superior to placebo in shortening the time to recovery in adults who were hospitalized with Covid-19 and had evidence of lower respiratory tract infection.” Somebody will have to translate the medicalese for me, but this doesn’t sound impressive (and there’s no impact on mortality).

Harvard-CU Boulder Portable Air Cleaner Calculator for Schools.v1.2 (GoogleDocs). GoogleDocs being what it is, there’s no author visible, but it comes attested.

COVID-19 and household energy implications: what are the main impacts on energy use? Heliyon

Can You Handle Herd Immunity? Ask These Philosophers Bloomberg

The rest is silence:

I can still hear you. pic.twitter.com/AY6jcvOQnv

Indonesia protesters: Our welfare will ‘only get worse’ with Jokowi’s new law Straits Timess

Have you heard about our kitchen garden at HQ? 🌻

It’s a place for our people to relax and unwind, helping to promote positive mental wellbeing – which is really important when our staff are tackling the toughest of problems to keep the country safe!#WorldMentalHealthDay 💚 pic.twitter.com/zQyHnMx6oe

“I Am Russia” — Navalny Story Collapses in Self-Contradiction John Helmer. Surely the least we can ask of our catspaws is that they keep their stories straight?

Putin’s Got His Problems, Too Patrick Buchanan

Senate Republicans rip new White House coronavirus proposal The Hill. Even if the bill is less than ideal, why not take the trillion now, and improve it later? Yang is correct:

That’s what liberal Democrats are always telling us on, say, health care, so why not pass a clean bill that relieves working class suffering? And improve it after you win the House and Senate?

Biden says ‘chicanery’ at polls is the only way he could lose U.S. election Reuters

Mail-In Ballot Rejection, Caucuses and an Incompetent Political Party Mike the Mad Biologist. “If Democrats were a competent political party (a boy can dream!), they would be spending a little less money on ads and more money on instructions and ensuring people have witnesses–I imagine the elderly could find it difficult to get a witness.” If the Democrats were a democratic political party, they would be doing all these things 24/7/365 as a core party function, for all citizens, and not going, hat-in-hand, to some squillionaire to fund an idpol-targeted vertical in a few random swing districts a few months out from the election, ffs.

Nine people who attended Trump rally in Minnesota contracted coronavirus The Hill. As I’ve said, it’s OK to have it. It’s not OK to spread it (musical interlude).

‘There Is a Different Set of Rules for Someone Like Donald Trump’ FAIR. On the tax story.

Biden campaign mulls possible ‘climate czar’ position Politico. “One person familiar with the Biden team’s discussions said there was no firm list of candidates for such a role, but some of the names that have circulated include former Secretary of State John Kerry and former Bill Clinton adviser John Podesta” [sobs quietly].

It’s Time to Put Some Muscle Behind the 25th Amendment The Nation. Has it occurred to anyone else that the “Commission on Presidential Capacity to Discharge the Powers and Duties of Office” might also install President Harris?

Progressive Groups Are Preparing to Thwart a Possible Trump-Led Coup. Here’s How. In These Times

One of the more likely and more unfortunate outcomes of election 2020 is that liberal Democrats will both believe and say they’ve defeated fascism — without having done any serious thinking about it. Brunch awaits!

Why Liberals Pretend They Have No Power The Atlantic

Our Consensus Reality Has Shattered The Atlantic. An “epistemological crisis,” as the Trillbillies say.

We Can’t Ignore Rural Voter Resentment Jacobin. Yes, we can.

This revamped D.C. hotel opened with a “female empowerment theme” that features:

• A portrait of RBG made out of 20,000 hand-painted tampons
• Cocktails named “the huntress” and “empowermint”
• And a head chef who is male. https://t.co/xMfkTfY2Lq pic.twitter.com/Jvhuy8MpYq

Forcing you to buy the rope with which to hang yourself:

Unbelievable. @Instacart is now requiring Shoppers to do the uncompensated work of distributing Prop 22 propaganda to customers —against our own self-interests. Even *if* (big if) this is legal, it is reprehensible and establishes a dangerous precedent for workers. #NOonProp22 pic.twitter.com/NXVblutvsh 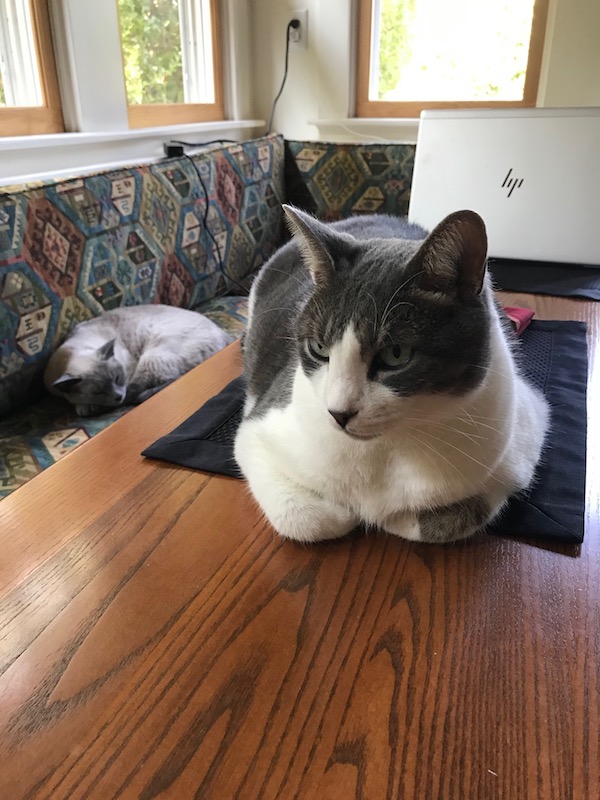 AM writes: “I think these two (Penny and Emmett) are defective – neither one is on my laptop!!”

Bonus antidote. Normally, I avoid images of animals in zoos, but this is exceptional:

An orangutan teaches how to crack coconutspic.twitter.com/iWrYGkZSNN