Yves here. This is extremely frustrating. I scheduled this post how the oil industry is dumping huge costs on citizens and it didn’t fire as set in the backstage. Apologies.

By Justin Mikulka, a freelance writer, audio and video producer living in New York who a degree in Civil and Environmental Engineering from Cornell University. Originally published at DeSmogBlog 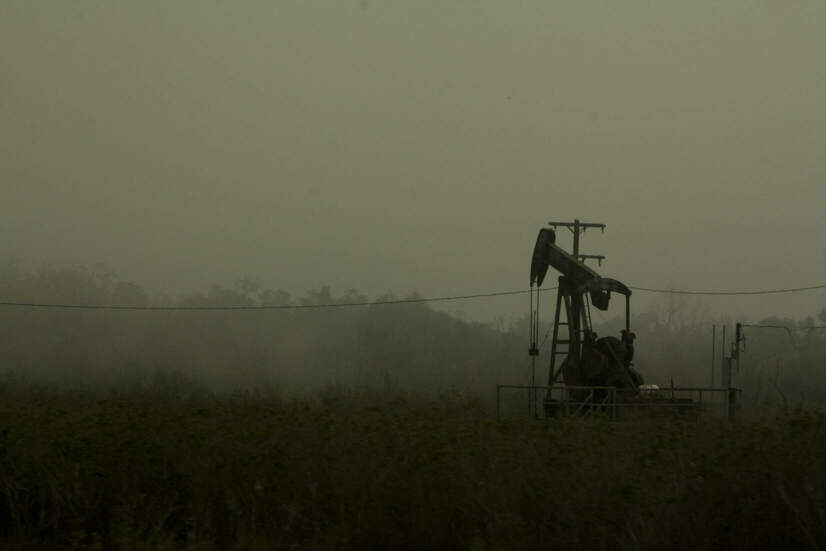 Amid a record wave of bankruptcies, the U.S. oil and gas industry is on the verge of defaulting on billions of dollars in environmental cleanup obligations.

Even the largest companies in the industry appear to have few plans to properly clean up and plug oil and gas wells after the wells stop producing — despite being legally required to do so. While the bankruptcy process could be an opportunity to hold accountable either these firms, or the firms acquiring the assets via bankruptcy, it instead has offered more opportunities for companies to walk away from cleanup responsibilities — while often rewarding the same executives who bankrupted them.

The results may be publicly funded cleanups of the millions of oil and gas wells that these companies have left behind. In a new report, Carbon Tracker, an independent climate-focused financial think tank, has estimated the costs to plug the 2.6 million documented onshore wells in the U.S. at $280 billion. This estimate does not include the costs to address an estimated 1.2 million undocumented wells.

Greg Rogers, a former Big Oil advisor, and co-author of a previous Carbon Tracker report on the likely costs of properly shutting down shale wells, suggested to DeSmog that oil and gas companies have factored walking away from their cleanup responsibilities into their business planning.

“The plan is that these costs will be transferred, these obligations will be transferred to the state at some point,” Rogers told DeSmog, “Why would a company want to go out and spend hundreds of millions of dollars plugging all of these wells when it could instead pay its executives?”

Whiting Petroleum’s CEO is leaving after getting a $6.4 million bonus for driving the company into bankruptcy https://t.co/NQ0ushyMAP

Despite federal and state laws requiring oil and gas companies to clean up and properly cap and abandon wells, there is overwhelming evidence that this is not happening.

One major reason why is that often, regulators lack the power to enforce compliance once the permits to drill the wells have been issued.

The best method to guarantee the wells are properly capped and abandoned is for regulators to require the companies to put up the money to do that before the well is drilled. This is most often done via a process known as surety bonding.

However, if the amount of money required for bonding is small enough, there is no incentive for companies to spend the additional money to properly cap the wells once the wells are no longer producing oil or gas. From a business standpoint, it is smarter for the well owner to walk away from the obligations at that point.

The new report from Carbon Tracker also notes that current bonding monies allocated for well cleanup are equal to roughly only 1 percent of that total expected cost.

State and federal regulators have failed to require sufficient bonding from the industry, giving the industry no incentive to spend the money to properly cap and abandon wells once they are no longer producing significant amounts of oil and gas.

This problem might have been avoided if state regulators had refused to grant drilling permits to oil and gas companies without proper bonding. Rob Schuwerk, executive director of Carbon Tracker and co-author of the two recent reports with Greg Rodgers, explained that states have the strongest negotiating position at the outset of the permitting process.

“The states have unnecessarily given industry the leverage,” Schuwerk told DeSmog, “There is no reason for any state to ever have said, ‘We’re not going to require you to put something up to clean up these wells.’

“It’s not like they [the oil companies] could’ve said, ‘we don’t want to put that money up so we’re going to go drill somewhere else.’ You’re really ultimately going to drill where the oil is.”

Instead, states have typically allowed the industry to promise to clean up, instead of requiring adequate bonding in advance to fund the process.

“The states haven’t done anything,” said Rogers, “The oil producing states are very much in the mode of ‘we want to encourage more oil and gas production.’”

But as more and more companies file for bankruptcy, state governments are finding they cannot hold them responsible for their environmental liabilities.

At the June 28, 2018 meeting of the Industrial Commission of North Dakota, North Dakota’s top oil and gas official announced the state had hired a new special assistant attorney general for oil and gas bankruptcy cases.

The meeting notes show that Lynn Helms, director of the North Dakota Department of Mineral Resources, was concerned about bankrupt shale drillers walking away from liabilities.

“We need to be able to track bankruptcies and act quickly to make sure that the judge is aware of North Dakota’s situation,” Helms said, “Bankruptcy does not clear the obligation for environmental cleanup.”

However, Helms’ statement is supported by existing case law.

A 1986 Supreme Court decision concluded that regarding environmental cleanup liabilities, “A bankruptcy court does not have the power to authorize an abandonment without formulating conditions that will adequately protect the public’s health and safety.”

Two years later, the United States Court of Appeals, Fifth Circuit in Texas reached a decision supporting this case law. In that case, the oil well owner had sold off the valuable wells, and attempted to walk away from the remaining wells as well as the responsibility to properly cap and abandon them.

The court found that “there is no question that under Texas law, the owner of an operating interest is required to plug wells that have remained unproductive for a year … a combination of Texas and federal law placed on the trustee an inescapable obligation to plug the unproductive wells.”

That decision concluded that “It therefore matters not whether the bankrupt estate produced any oil or received any revenue from the wells. As the operator, it was required to plug them.”

“The bankruptcy court process is a bit like the Wild West,” said Rogers. “There is a lot of flexibility, they go very fast in my understanding and the judges tend to have a lot of discretion.”

The shale industry is in the middle of a historic wave of bankruptcies, Reuters reports. The results so far indicate that wells are being abandoned by operators in bankruptcy, and that despite the existing laws, the cleanup bill will have to be picked up by the public.

Abandonment via Bankruptcy in Colorado

Colorado oil and gas companies can post a bond of $60,000 to cover up to 100 wells, or $100,000 to cover any total of wells over 100. It isn’t hard to understand the massive underfunding of cleanup responsibilities when the cost to bond for over 100 wells is less than the known cost to cap and abandon one well.

In 2019, the Colorado oil and gas operator Petroshare filed for Chapter 11 bankruptcy when it could no longer pay back its loans. The owner of those loans chose to take Petroshare’s assets as a result of the bankruptcy — or at least the assets that still had value.

In the bankruptcy process, the state of Colorado let the new company abandon any of the 89 wells that it didn’t want, effectively leaving the cleanup costs to the taxpayers of Colorado. Carbon Tracker estimates that 67 wells could now be the state’s responsibility, with a potential price tag of almost $12 million to plug and abandon them properly.

Fram Americas, a Norwegian-owned company that declared bankruptcy in Colorado in 2019, had posted a bond of $300,000 for its wells. But in its bankruptcy filings the company listed plugging and abandonment costs of close to $6 million.

Fram claimed it had no money to plug the wells and Fram’s bankruptcy attorney Kenneth Buechler explained the company’s position.

“I assume that the government authorities will plug the wells since the companies are no longer in business,” Buechler said.

Buechler’s assumption was on target. With such low bonding requirements, the money to clean up was simply not there, and now the state of Colorado is stuck with the bill, while its Norwegian owners have dodged responsibility.

As Carbon Tracker reported, the failure of the bonding requirements at state and federal levels gives companies incentive to spend money that might have gone to plugging and abandoning wells to other line items, like executive compensation. Once all the money is spent, they can simply walk away from cleanup obligations via bankruptcy, while the remaining valuable assets are passed on to new investors.

#oilandgas is a legal Ponzi scheme, then they do #BankruptcyForProfit, & as long as it all continues to have backing of government, the cycle continues & the mess continues to grow before eventually falling to taxpayers to cleanup thx to crooked execs + regulators + politicians. https://t.co/te22fWjBcL

In 2018 DeSmog highlighted that Floyd Wilson, the CEO of oil company Halcón Resources, had profited during the bankruptcy process. This year, the research organization Documented has reported on multiple examples of CEOs being rewarded by the firms they led into bankruptcy, rather than fired, noting that the bankruptcy process “may open new avenues for CEOs to enrich themselves at the expense of workers, creditors, and equity owners.”

CRC is the first big oil driller in CA to go bankrupt, but it won’t be the last. New analysis from @SierraClub shows why the state needs to take action to make sure taxpayers aren’t left to cover these companies’ huge well cleanup costs #CleanUpOilWells https://t.co/s3R5kzAvTq

This lack of executive accountability for financial failure is another incentive for companies to not consider properly funding cleanup costs, especially if the trend of letting companies walk away from liabilities in bankruptcy continues.

Shale oil and gas companies have sustained losses of over $300 billion dollars in the past decade. But the executives who oversaw those losses have been some of the best paid in America. And many of these same executives have received retention bonuses to remain with the very same companies they bankrupted, then hired to take over the new company that emerges from the bankruptcy.

The combination of flawed executive pay incentives and the option of just walking away from environmental liabilities in bankruptcy combine to incentivize executives to ignore the costs of environmental cleanup.

Last October, DeSmog asked, “Will the Public End up Paying to Clean up the Fracking Boom?” The answer increasingly looks to be a very solid “yes.”

“Orphan wells in the best of times are a big deal. The potential for a coming tsunami of additional orphan wells is of concern to many,” Adam Peltz, a lawyer for the Environmental Defense Fund, told Politico in May.

Concern is growing in many states about having to pay for orphan wells. According to the Bismarck Tribune, Bruce Hicks, assistant director of the North Dakota Oil and Gas Division, last year raised the alarm about the issue of companies abandoning wells, saying, “It’s starting to become out of control.”

Following the lead of the coal industry, as The New Republic notes, bankruptcy has become good business for the failing oil and gas industry, which is using loopholes in the process to shift billions in costs for closing down wells and remediating the environment around them to the public. Far from paying a price for this mismanagement, company executives are being rewarded with lucrative pay and steady jobs.

This is the first in a series of DeSmog articles investigating the ways that oil and gas companies are shifting environmental liabilities to the public.