A Broken Census Can Break Democracy
The census is best known for determining how we the people are represented. But it also quietly defends our democracy from deeper problems.
Bruce Bartlett, The New Republic October, 19 202

As the 2020 census winds down, it’s important to remember why it matters and what’s at stake. Its primary purpose is to allocate seats in the House of Representatives and provide geographical population data for drawing congressional district lines. The latter requirement is the main reason why rough population estimates will not suffice—it’s essential to know precisely where people reside, not just how many people live in a particular state, so that state lawmakers can draw accurate boundaries for House seats. 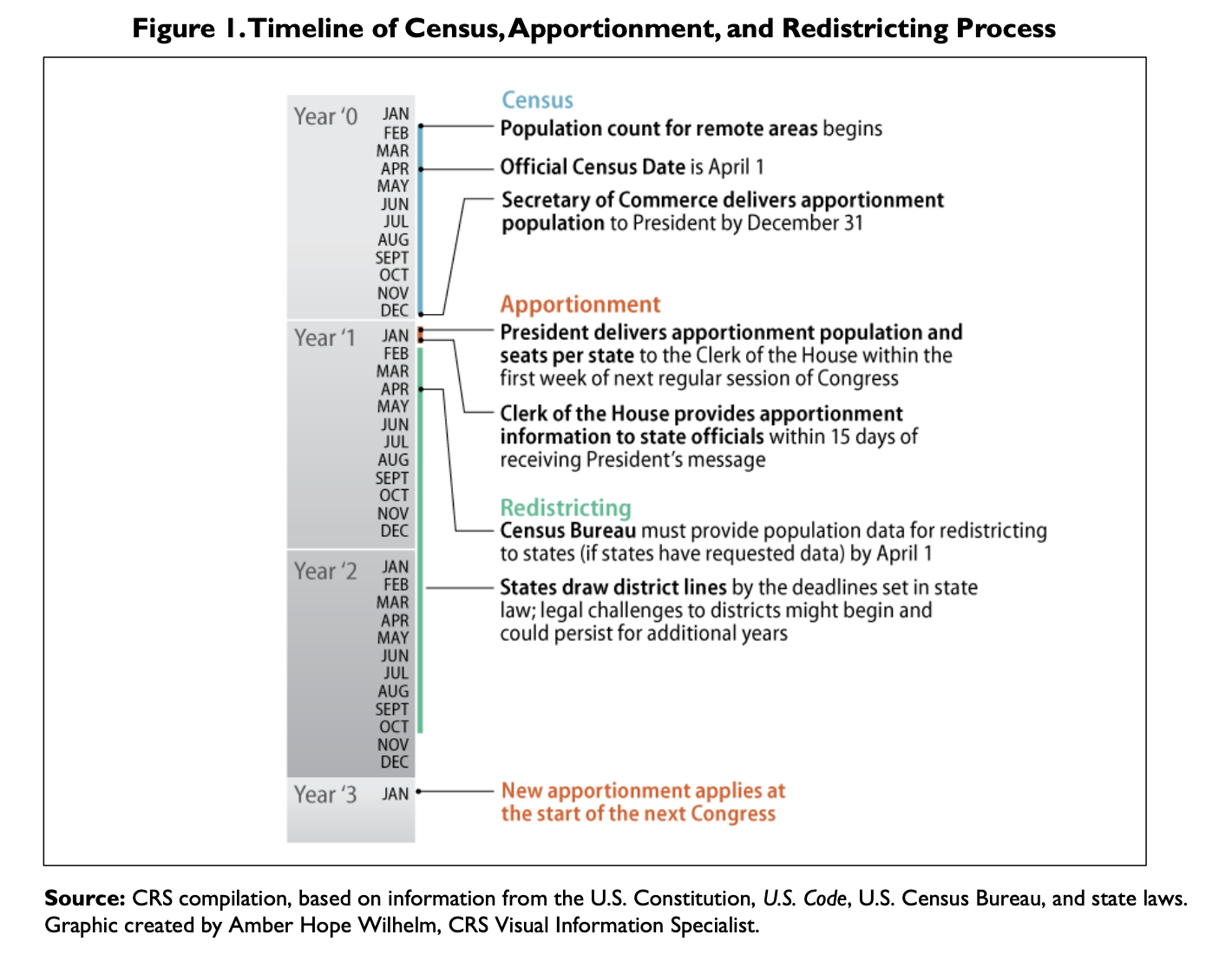 The Population Reference Bureau estimates that the 2020 census will shift seven congressional seats from states that have lost population relative to those that have gained population since the 2010 census. Gaining states are Arizona (one), Colorado (one), Florida (one), North Carolina (one), Oregon (one), and Texas (two). Losing states are (one each): Illinois, Michigan, Minnesota, New York, Pennsylvania, Rhode Island, and West Virginia. Losing states will concomitantly lose votes in the Electoral College, and gaining states will gain votes, shifting their importance in presidential elections. 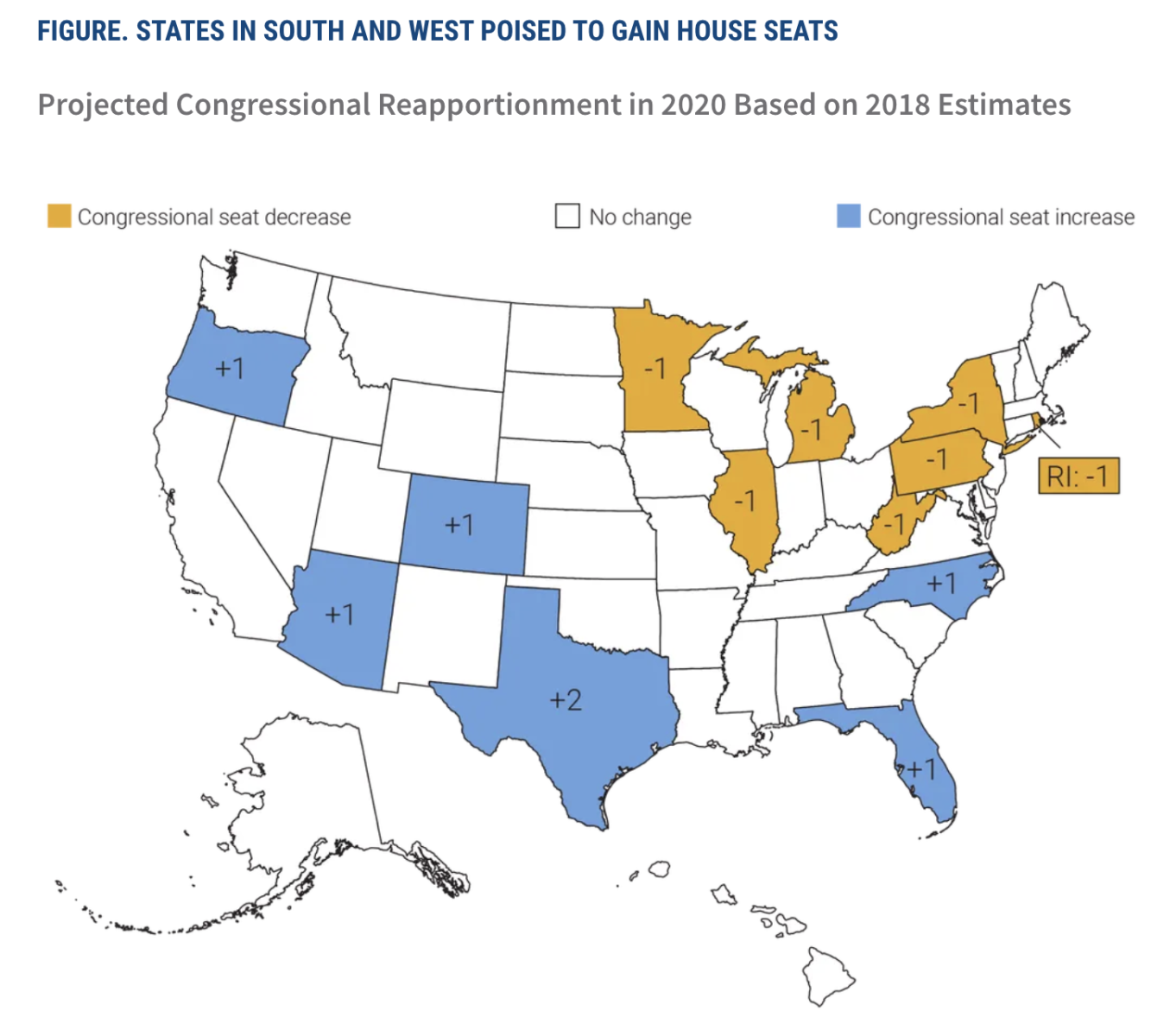 The balance of power in the House and the Electoral College has changed considerably over time. In 1910, the last time the size of the House was increased, the states with the largest House delegations were Illinois (27), Pennsylvania (36), and New York (43). Today, Illinois and Pennsylvania each have just 18 seats and will likely have just 17 after reapportionment. New York has 27 seats today, and that will probably fall to 26. States gaining House seats include California, which went from 11 in 1910 to 53 now, and Florida, which had just four seats in 1910 and now has 27.

The size of the House of Representatives was one of the most hotly debated issues at the Constitutional Convention in Philadelphia in 1787. The delegates initially proposed a figure of 40,000 people per congressional district. But George Washington thought this number was too high; on the only occasion in which he addressed the convention, he asked that it be reduced to 30,000. This change was agreed to, and that is what Article I, Section 2 of the Constitution requires.

The Constitution is oddly silent on the question of whether the House would increase in size as the population of the United States grew. James Madison was among those who worried that the House would not increase in size, leading to increasingly large districts. He warned against the resulting imbalance in popular representation in Federalist 55. He therefore proposed that the first amendment to the Constitution be one that guaranteed an increase in the House proportional to rising population. His draft amendment read:

But this amendment was not ratified along with the others that we call the Bill of Rights. Fortunately, Madison’s fears proved unfounded for more than 100 years. The size of the House was increased, with additional states and rising population, from 65 members in the first Congress to 435 after the 1910 census. But under Madison’s formulation, the House today would have 6,600 members.

After the 1920 census, Congress failed either to increase the size of the House or change its apportionment, even though the country’s population had both substantially increased and significantly changed its geographical distribution. Not only had the relative populations of the various states changed, but the populations within states had also shifted, generally reducing the rural population and increasing the urban one. As a political matter, this was important because rural voters tended to support Prohibition, while those in the cities favored repeal.

By the end of the 1920s, malapportionment was severe, with states that had gained relative population since 1910, such as California, seriously underrepresented in the House, and those that had lost relative population, such as Missouri, overrepresented. There was also a constitutional question of whether the House was in fact legally chartered after it failed to fulfill its constitutional duty to reapportion. And since apportionment affects the Electoral College, there was fear that that malapportionment might call into question the legitimacy of the president.

Another issue that arose during the 1920s apportionment debate was whether Southern states should have their representation reduced because of widespread violation of the voting rights of African Americans, as Section 2 of the Fourteenth Amendment provided for. In 1920, Representative George H. Tinkham, Republican of Massachusetts, suggested that apportionment be based on the actual voting population, rather than the gross population—a move that would have penalized states that encouraged voter disenfranchisement. Some legal scholars believe this is still an important consideration in apportionment.

Unfortunately, there was strong resistance to increasing the size of the House for both philosophical and institutional reasons, such as the need to increase the physical size of the House chamber. Two Speakers of the House, Frederick H. Gillett and Nicholas Longworth, strongly opposed an expanded House. In a 1920 editorial, The New York Times agreed, saying: “The House is too large already. After the next census Congress will have to perform the duty which it now shuns and postpones. For physical reasons, if no other, the growth of the House can’t be allowed to continue indefinitely. The bigger it is, the greater the hindrances to effective work.”

Arguing for a larger House, Representative Edgar Crumpacker of Indiana said: “If we make the ratio [of persons per representative] too large the idea of representation becomes attenuated and less definite. The personal interest of the voter in his representative becomes less important to him, and we may lose something of the vital strength of our representative form of government.”

Eventually, President Herbert Hoover pressured Congress not only to resolve the apportionment standoff but also to do so permanently. This led to passage of the Permanent Apportionment Act of 1929. Not only did this measure fix the size of the House at 435, but it also established a mathematical formula for automatic reapportionment after future decennial censuses.

One problem that continues to fester is malapportionment from the requirement that no state may have fewer than one House member. This means that small states such as Wyoming, Vermont, and North Dakota are overrepresented in the House, while more populous states are underrepresented. This is a violation of the principle of one person one vote established by the Supreme Court in the 1964 case of Reynolds v. Sims. (In 2009, some activists brought suit in federal court challenging the constitutionality of the law freezing the number of House members at 435. But it was rejected by a Federal District Court in 2010, which said the question was a political one for Congress to decide, and the Supreme Court refused to review the case.)

According to the Inter-Parliamentary Union, many countries much smaller than the U.S. have considerably more members in the lower house of their national legislature, including the United Kingdom (650), Italy (630), Germany (598), France (577), and Japan (465).

On the other hand, Jonathan Bernstein, writing in The New Republic in 2010, asserted that above a certain threshold, it doesn’t really matter how big a legislative district is. “The problem here is that even with an extreme reform—tripling the size of the House—we’re still not going to get fewer than 250,000 people per representative,” he said. “In practical terms, there just isn’t really much of a difference between sharing a member with that many people and sharing her with several millions; in any district larger than, say, one hundred thousand, it’s hard to believe that anyone is going to feel he has the undivided attention of his member of Congress.”

I have always thought that an important consideration arising from acute malapportionment is the cost of running for office. With large congressional districts, those running for office have little choice but to use expensive mass methods to reach voters, such as television advertising. This in turn requires them to raise vast amounts of money, which is largely a waste of time, corrupts the election process, and empowers lobbyists. Smaller districts would allow for more one-on-one contact between candidates and voters and make cheaper electoral methods, such as door-to-door canvassing and phone banks, more effective.

It’s unlikely at this point that the House will ever vote to greatly increase its size because it would dilute the power of each individual member, as well as requiring a new House office building. But it is increasingly undemocratic to have the size of House seats continue to grow without limit. However, reform of the Electoral College is a highly salient issue among many Democrats, and its time may have come. (Intriguingly, a 2003 article in the journal PS: Political Science and Politics argued that had the House increased in size to 500 before the 2000 election, Al Gore would have won, owing to more precise apportionment and, therefore, electoral votes in his favor.) Perhaps the surest way to remedy malapportionment of the House is to confront the malapportionment of the presidency.

Bruce Bartlett is a former Republican who served as a domestic policy adviser to Ronald Reagan and as a Treasury official under George H. W. Bush. A longtime observer and commenter on economic and political affairs in Washington, D.C., he has written for The New York Times, The Washington Post, The Wall Street Journal, USA Today, Politico, and many others. A bestselling author, his latest book is The Truth Matters: A Citizen’s Guide to Separating Facts From Lies and Stopping Fake News in Its Tracks.