Latest News
Home /How Lack of Wealth Is a Wage Trap

Yves here. The findings of this paper, that workers who have low or no wealth wind up stuck in low wage work, is particularly striking since the study uses data from Norway, a country with a good public health system and social safety nets. I’m not sure how being poor would drive job opportunities in Norway, but here, it’s not hard to see how not having a car or showing up at interviews in ill-fitting clothes or having bad teeth would severely restrict work options here. Similarly, poverty makes it hard to afford the time, let alone the cost, of paying to obtain certifications or technical skills.

By Roberto Iacono, Associate Professor of Economics and Social Policy at the Norwegian University of Science and Technology and Marco Ranaldi, Postdoctoral scholar, Stone Center on Socio-Economic Inequality at the Graduate Center, CUNY. Originally published at VoxEU

The uneven distribution of wealth in society is commonly perceived as a matter of concern per se for inequality-averse policymakers. However, being wealth-poor or wealth-rich is also correlated with outcomes in the labour market. This column examines how wages and unemployment vary across the relative distribution of personal wealth in Norway, focusing on the wage-to-unemployment ratio across the different percentiles of the wealth distribution. It finds that wealth-poor individuals cannot escape low labour incomes regardless of the unemployment rate they face, while the unemployment elasticity of wages is substantially higher for wealth-rich individuals.

Economists have long come to accept inequality in the pace of wealth accumulation across the wealth distribution as a more accurate measure of inequality than income (Mankiw 2015).

However, the academic debate has in recent years focused on documenting the extent to which both capital income and wealth are concentrated in the hands of a few individuals (Piketty 2014, see also König et al. (2020) for a recent survey).

Stiglitz (2015) highlights the need to document the changing distribution of income and wealth, but also calls for new complementary facts to be studied. In their Vox column, Kanbur and Stiglitz (2015) conclude: “We need to focus on the interaction between income from physical and financial capital and income from human capital in determining snapshot inequality”.

Along these same lines, our research highlights the extent to which the distribution of wealth holdings is unambiguously associated with outcomes in the labour market (Iacono and Ranaldi 2020). We argue that the relative distribution of personal wealth is relevant not only per se but also to better comprehend the role of wealth in shaping individuals’ working trajectories over the life cycle.

Personal Wealth and the Labour Market

The empirical relationship between gross wages and the unemployment rate (the so-called wage curve) is a matter of great relevance to policymakers and has been studied extensively by economists. Do wages respond to changes in the unemployment rate, for instance? I.e. do wages adjust if there is an unexpected surge in unemployment, as in the current pandemic? Does the unemployment rate vary when wages rise? This wage curve has been estimated previously across space, both at the national (Blanchflower and Oswald 1994) and regional levels (Blanchflower and Oswald 1995). In our paper, we estimate the wage curve through the lens of the personal wealth distribution. Ranking individuals according to their wealth holdings allows us to uncover several stylized facts related to labour market outcomes that are associated with wealth, rather than with traditional explanatory variables such as educational attainment or parental background. Thanks to the rich and fine-grained administrative data on personal wealth in Norway, our sample covers the entire population of residents between 2000 and 2015. Based on this large-scale sample, we document several novel facts about the wage curve across the wealth distribution.

The first stylised fact shows that the elasticity of the wage curve – how gross wages change with a change in the unemployment rate – increases monotonically with gross wealth, as shown in Figure 1.

Figure 1 The wage curve across the wealth distribution 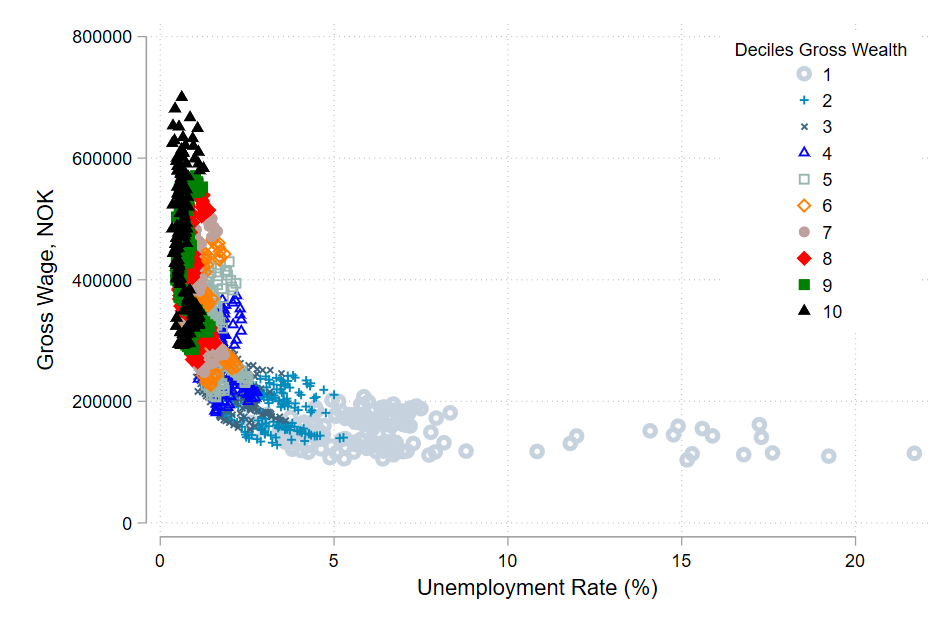 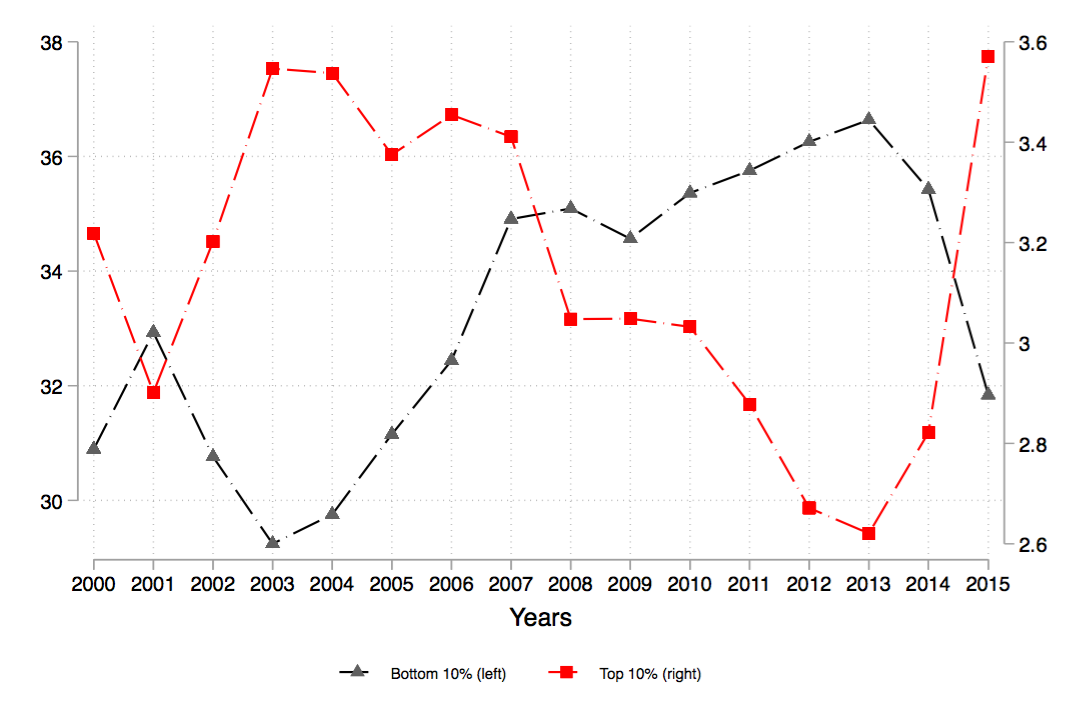 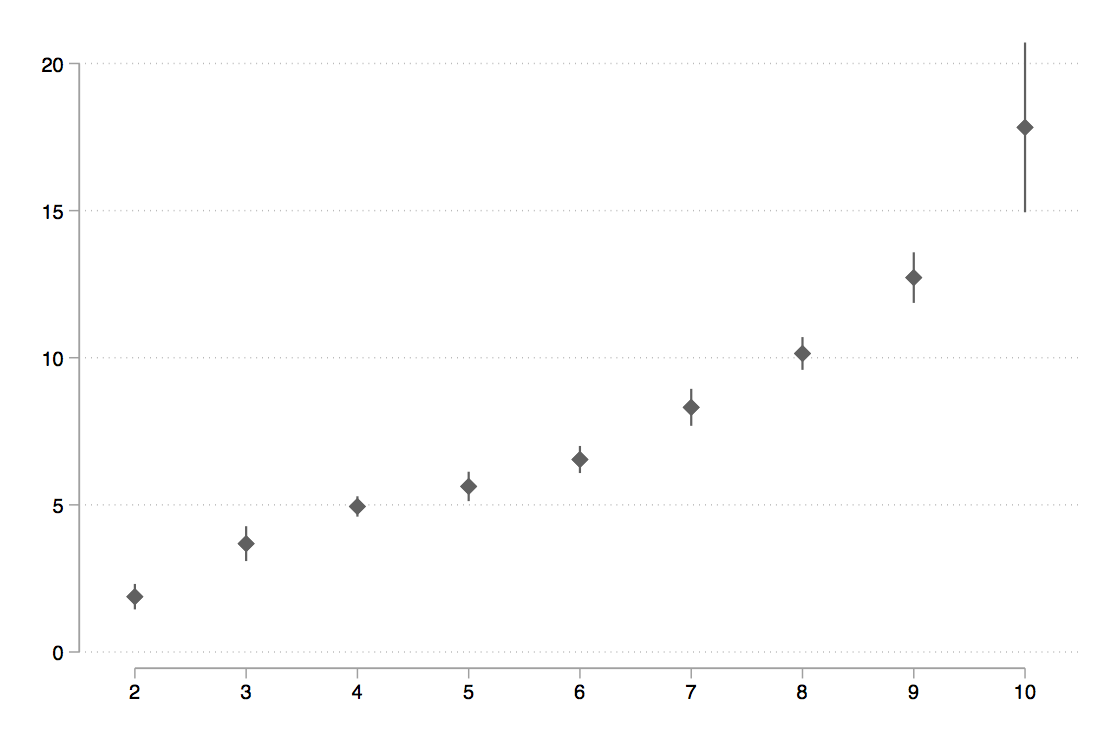 All in all, these findings show the extent to which wealth inequality shapes labour market outcomes. This further motivates the need to better design wealth redistribution policies. In addition, the stylised fact that wealth-poor individuals are trapped in a state of low income regardless of the unemployment rate does not easily follow from standard competitive labour market modelling. Hence, we advocate for more evidence on the matter, not only to inform public policies aimed at improving employment opportunities but also to improve the macroeconomic modelling of the labour market. Moreover, we think that our main result, whereby the slope of the wage curve is a positive function of gross wealth, can be incorporated in any macroeconomic model of the labour market that wishes to account for wealth inequality in its dynamics.

The new stylized facts of our column on wealth and its role in the labour market can be summarised as follows: