Election day is finally here. Last month, I shared some random facts related to markets and the election. Here are some more small items that fell in between tweets and columns. No one (me included) wants to hear any more politicking, so see if any of these are useful, informative or amusing:

In the sleepy little hamlet where I live, people have been lining up to vote since 5:15 am where polls open at 6:00 am

• During the run up to the election, I have been enjoying The Bulwark. This is from their daily newsletter, the Triad. I thought it was worth sharing on election day:

“There are wicked people in the world and they must be opposed. There are dangerous ideas and they must be fought. But at the individual level of people who are not wicked or dangerous—but who may have made an error in judgment or be mistaken—love them.”  -Jonathan V. Last

• What does the enormous turnout mean? Enthusiastic Trump voters? A referendum on the incumbent? I don’t pretend to know, but it is a welcome change from America’s usual apathetic voter turnout.

• The new 60/40: Assume anything you read from either side is about 60% data analysis, 40% wishful thinking. Reminds me to be cautious about any predictions I might even think about making.

• 2020 is the first Presidential election in American history where both candidates are over 70 years old. (Hillary Clinton turned 69 on October 26, 2016).

• What time do the polling stations close in your state? The The Washington Post has the answer. 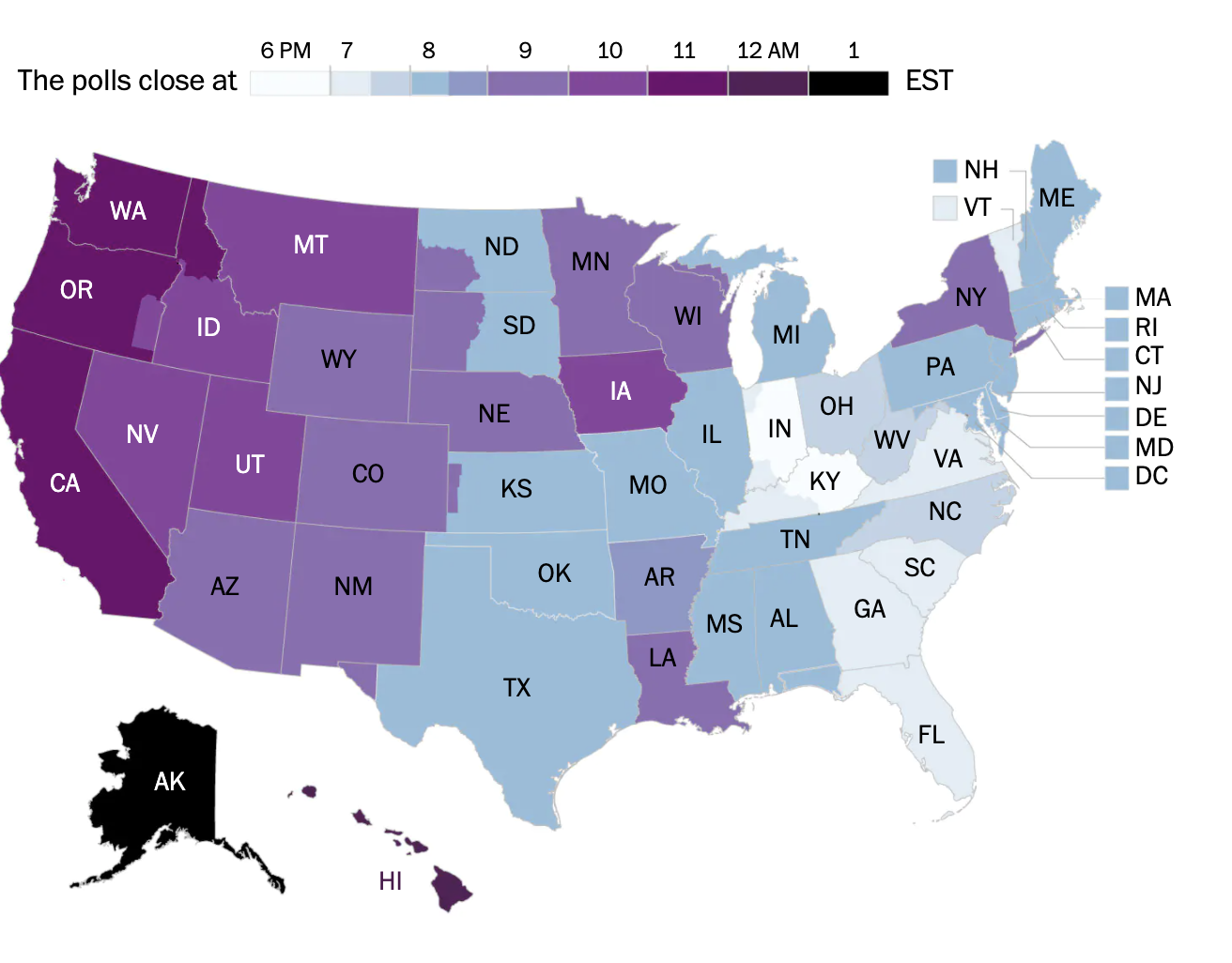 • David Byrne of Talking Heads and Broadway’s American Utopia has a website called We are not divided. Its a feel good explanation on what brings us together as opposed to tear us apart. Check it out.

• CNBC’s Mike Santoli observed that Energy and financial stocks were viewed as the best bets under a deregulatory Trump administration, yet they’ve been the worst performing sectors since 2016.

• “Don’t Sweat the Polls” counsels The Atlantic; “The Polls Make Sense” suggests The Bulwark; I bet most people remain skeptical after 2016’s PTSD.

• Pennsylvania (where the U.S. Constitution was written), and the second state in the Union, has participated in all 58 presidential elections. It voted Democratic in the six elections prior to 2016.

• Why do polls sometime fail to correctly predict election outcomes? Because they are a snapshot of sentiment, but not a strong indicator of future behavior.

• What states correlate most closely with victory? The Washington Post notes not the swing states but these: 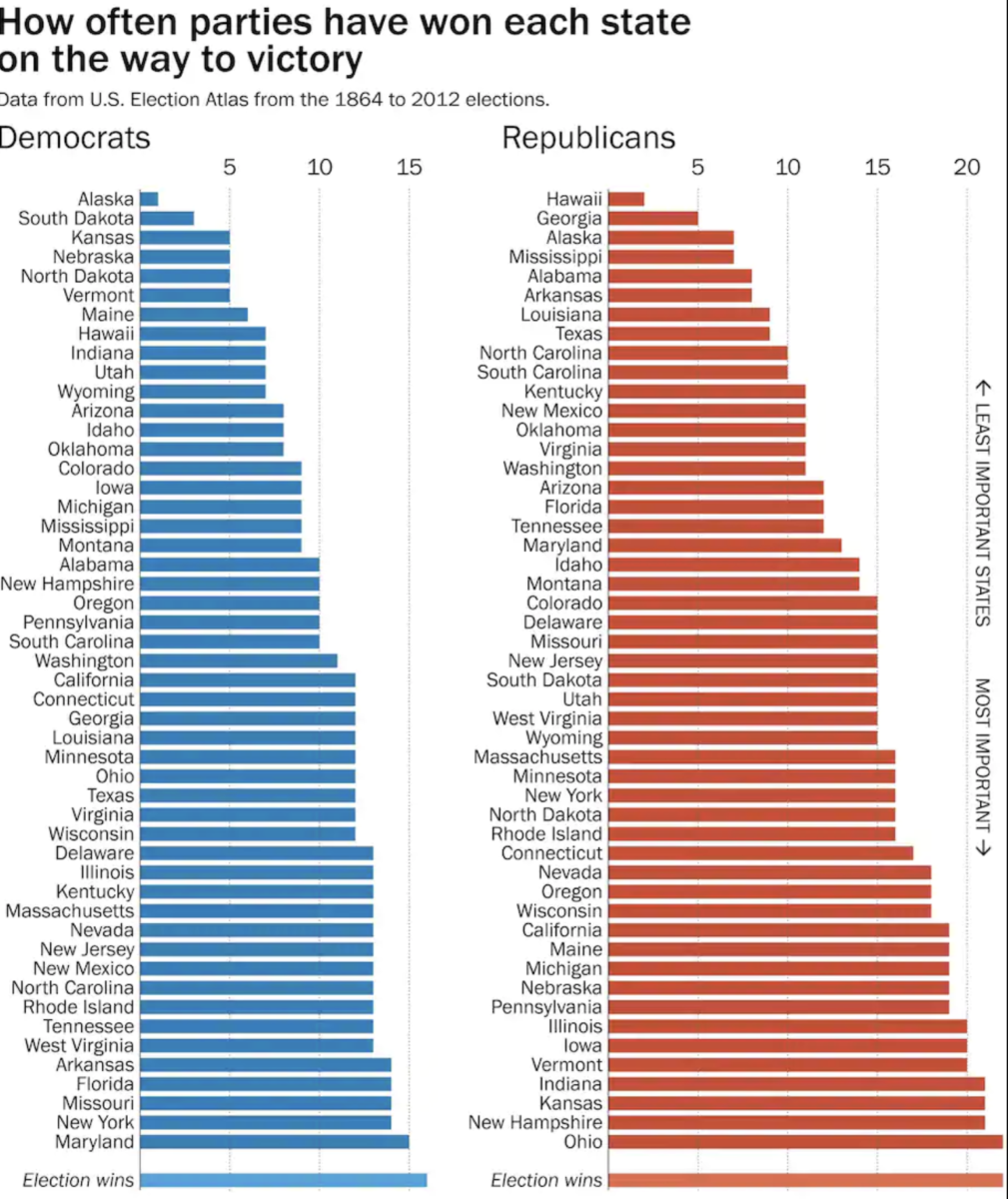 • The stock market thinks Joe Biden is going to beat Donald Trump; one of the few forecasters who correctly predicted Trump to win in 2016 is predicting that he will win 2020.

• I have written extensively about Prediction markets and why they sometimes fail. If you are relying on those forecasts, be aware that they have a very mixed record. 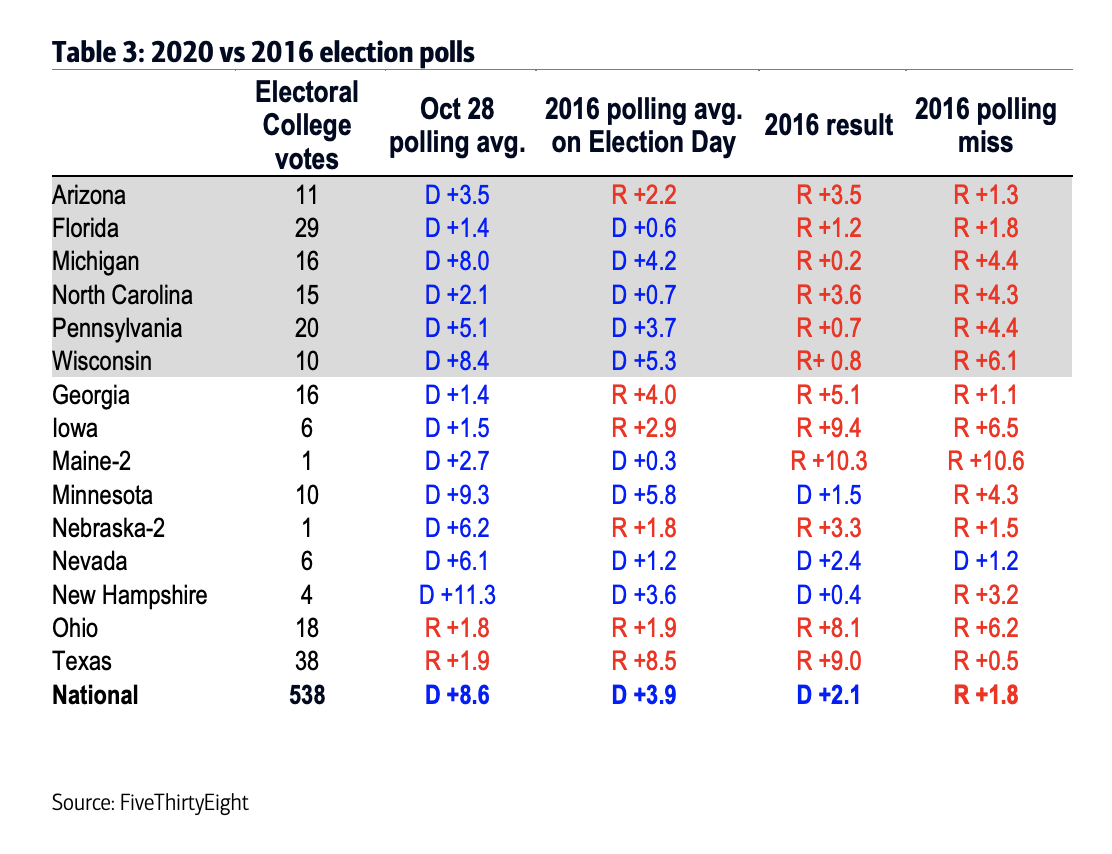 • Florida votes: Turnout in the FLA has been between 70-75% in every presidential election since 2000.

• Its bad with investing, but its even worse with politics: These are the 11 Cognitive Biases that influence political outcomes

• Over the past few months, I have been having fun with the website 270 to win. You can look at the most recent polling for electoral college, by state, and by different forecasters. Check it out.

• When was the last time a group of political ad makers got the full 60 Minutes treatment? The Lincoln Project may be the first to garner such attention.

• fivethirtyeight give the President a 10% chance of winning this election, calling it “A Fine Line Between A Landslide And A Nail-Biter.” It is a big election for both of them — but if 538 is wrong two elections in a row, I would imagine its a big blow to their business model.

• Florida, Georgia, and North Carolina all typically report by 10:00 p.m. Watch these three states to see if it is a blowout, or a closely contested election.

• Ohio (mostly) picks the winners: Since 1944, Ohioans have sided with the losing candidate only once – opting for Nixon over Kennedy in 1960.

• From 1872 through 1976, Texas went Democratic in the vast majority of elections. However, that changed in 1980, and Texas has sided with the Republicans ever since.

• This is the nicest story you will ever read about any candidate.

• Around the 2018 mid-term elections, I observed that regardless of your views of the President, he has revealed much about America — much that I did not know: Trump the Revealer.

• In 1800, the outcome of the Presidential electoral college voting between Thomas Jefferson and Aaron Burr resulted in a tie! The Constitution throws it to House of Representatives, where each state’s congressional caucus gets a single vote. (Jefferson won). 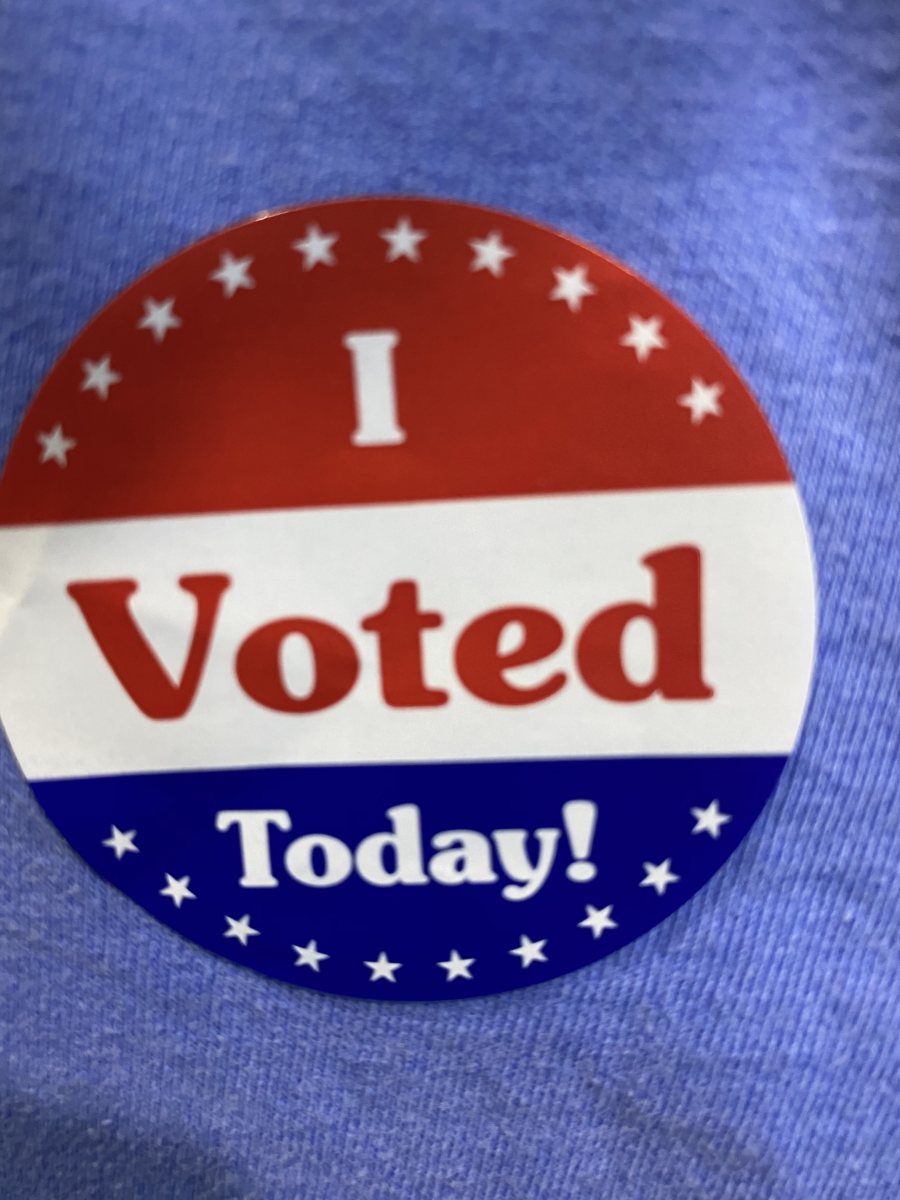