A Plan to Save Appalachia’s Wild Ginseng Wired

The foul-smelling fuel that could power big ships BBC

Can you trust that Amazon review? 42% may be fake, independent monitor says. Chicago Tribune

Could a Covid vaccine bring back normality? Guardian

Will vaccination refusal prolong the war on SARS-CoV-2? FREE British Medical Journal. From the Conclusion: “It is very important to start conducting educational public health activities on the topic of vaccination as soon as possible, before a vaccine becomes available, in order to improve attitudes towards SARS-CoV-2 vaccination. Only by educating the general public about the benefits, safety and efficacy of vaccines can we hope to avoid the unnecessary prolongation of the COVID-19 pandemic.” I think the best approach would be scolding and shaming, especially when done by experts!

COVID-19 Patient Zero: Data Analysis Identifies the “Mother” of All SARS-CoV-2 Genomes SciTech Daily. “They found the proCoV2 [progentior] virus and its initial descendants arose in China, based on the earliest mutations of proCoV2 and their locations. Furthermore, they also demonstrated that a population of strains with as many as six mutational differences from proCoV2 existed at the time of the first detection of COVID-19 cases in China. With estimates of SARS-CoV-2 mutating 25 times per year, this meant that the virus must already have been infecting people several weeks before the December 2019 cases.”

‘This isn’t over!’: Trump supporters refuse to accept defeat AP

Which Four Seasons? Oh, not that one. NYT. Wretched advance work:

And in a country hungry for heroes:

The hero of this story, obviously, is whoever answered the phone at Four Seasons Total Landscaping and had the presence of mind to quote the campaign a rental fee, rather than correcting the WH staffer making the call.

Republicans solidify grip on state legislatures, which is likely to lead to redistricting and gerrymandering efforts in 2021 CNBC

Texas Democrats Thought 2020 Would Be a Banner Year. Instead, It Was a Catastrophe. Texas Observer. Beto, good job.

Senate Control Likely Decided By Fate Of 2 Georgia Runoff Races NPR. But not so fast–

Meet David Keith, the brains behind ‘Bear Doctor’ Al Gross’ unorthodox, underdog and utterly colorful run for U.S. Senate Anchorage Press. This race has yet to be called.

Biden Can’t Be F.D.R. He Could Still Be L.B.J. Anand Giridharadas, NYT

A president-elect with big ambitions but more prosaic skills FT

Ding-dong, the jerk is gone. But read this before you sing the Hallelujah Chorus Thomas Frank, Guardian

America’s Next Authoritarian Will Be Much More Competent Zeynep Tufekci, The Atlantic

“We”? Is there any data that shows Harris helped Biden anywhere but the Hamptons? Also, idpol erasure alert:

Asked the guy working the register at this Mt. Pleasant liquor store about their champagne sales.

CRY WITH RELIEF: I am at 35,000 feet trying not to cry. But I will. As a native Philadelphian I thank all of you who voted for saving the American Democracy. YOU ALL SAVED AMERICA. THANK YOU. THANK YOU THANK YOU! NOW CHAMPAGNE!!! 🍾🍾🍾
— Malcolm Nance (@MalcolmNance) November 7, 2020

The marchers — their numbers swelling every second, now at more than a hundred — is dancing to music from Hamilton and cheering as it passes through a tunnel, headed to the White House.

French media having to explain to readers who @GrittyNHL is as part of their election coverage wasn’t on my 2020 bingo card, but it’s definitely my fave moment of the cycle so far. pic.twitter.com/d8Pz0H8d9R
— Chris Sgro (@cristoferosgro) November 7, 2020

Obama-Era Alumni Are Favorites for Biden’s Top Economic Posts Bloomberg. A survey of candidates for all Cabinet positions. See especially Flournoy for Defense and Haines for CIA. Politico’s list is similar:

I can’t imagine a better team to improve the material conditions of the working class.

Now Trump has lost the election, Pence could pardon him — but it’s Biden who should Independent

Toomey calls for Fed special loan programs to end, setting up clash with Democrats Politico. So much for fiscal!

Trident Must Be Destroyed, Not Given to Westminster Craig Murray

Worth listening to, given the House debacle. Thread:

One thing I’ll say: for the last two years, I and progressive candidates have been unseating powerful Dem incumbents supported by DCCC.

Not *once* has anyone in the party asked me what weaknesses I’ve found in their operation.

If they stop blaming progressives, we can help.
— Alexandria Ocasio-Cortez (@AOC) November 7, 2020

‘Trump Has Given Us a Gift’: GOP Insiders See Victory in Potential Loss New York Magazine

The movement that backed Donald Trump is here to stay Christopher Caldwell, FT

A View from Trump Country? Tarance Ray, Verso. Ray is one of the Trillbillies.

No Matter the Liberal Metric Chosen, the Bush/Cheney Administration Was Far Worse Than Trump. Glenn Greenwald

Why the networks can’t bear to call the election Ryan Grim, Bad News

If Biden Wins, He Should Start By Ending American Primacy The American Conservative

The elephant (and the donkey) in the room Tempest

To see ourselves as others see us….

I have seen this image twice in the last 24 hours – posted first by a Kurdish friend, then by another in Brazil pic.twitter.com/4OrFZSLI53
— Vincent Bevins (@Vinncent) November 7, 2020

On ABC, Rahm Emanuel literally says a Biden White House should tell people laid off from retail stores like JC Penney to learn to code.

Uber says it wants to bring laws like Prop 22 to other states MSN. So, the investment is worth it… Even if the benefits don’t show up on the balance sheet of any one firm. 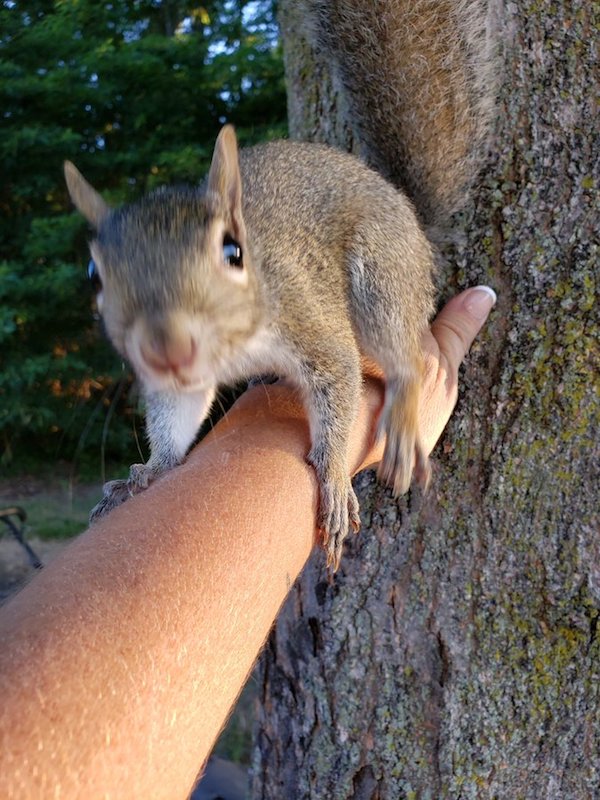 I wouldn’t try this at home, even with a baby squirrel as cute as this one.