Cygnet failure! Hapless rail staff struggle to round up two runaway swans after they land on station platform Daily Mail

What’s next for the Treasury-Fed COVID-19 lending facilities? Brookings Institution

Southwest CEO: “You should fly” Axios (Re Silc).

Doctors say CDC should warn people the side effects from Covid vaccine shots won’t be ‘a walk in the park’ CNBC (Re Silc). If we want to destroy uptake, lots of unexplained and ugly side effects would be the way to go…

The Public’s Willingness to Get a Coronavirus Vaccine Ticks Up Slightly With Promising Developments and Surge in Cases Morning Consult. Averages conceal: 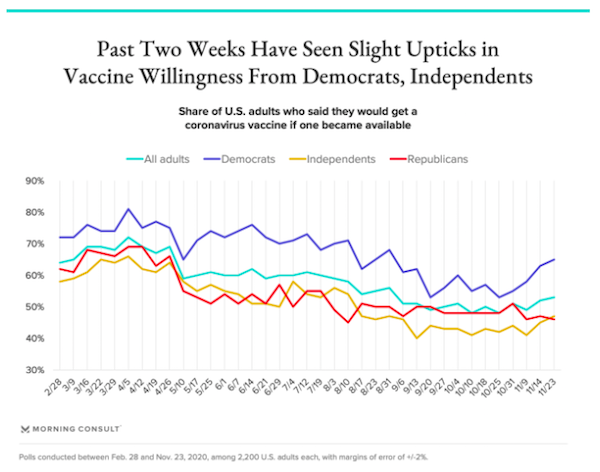 A Cluster-Randomized Trial of Hydroxychloroquine for Prevention of Covid-19 NEJM. From the Conclusions: “Postexposure therapy with hydroxychloroquine did not prevent SARS-CoV-2 infection or symptomatic Covid-19 in healthy persons exposed to a PCR-positive case patient.”

The perspective of fluid flow behavior of respiratory droplets and aerosols through the facemasks in context of SARS-CoV-2 Physics of Fluids. From the Abstract: “Key design aspects such as thermal comfort and flow resistance are discussed.”

Does contact tracing work? Quasi-experimental evidence from an Excel error in England (PDF) CAGE Research Centre. A natural experiment. From the Abstract: “Between September 25 and October 2, 2020, a total of 15,841 COVID-19 cases in England (around 15 to 20% of all cases) were not immediately referred to the contact tracing system due to a data processing error. Case information was truncated from an Excel spreadsheet after the row limit had been reached, which was discovered on October 3. There is substantial variation in the degree to which different parts of England areas were exposed – by chance – to delayed referrals of COVID-19 cases to to the contact tracing system. We show that more affected areas subsequently experienced a drastic rise in new COVID-19 infections and deaths alongside an increase in the positivity rate and the number of test performed, as well as a decline in the performance of the contact tracing system. Conservative estimates suggest that the failure of timely contact tracing due to the data glitch is associated with more than 125,000 additional infections and over 1,500 additional COVID-19- related deaths. Our findings provide strong quasi-experimental evidence for the effectiveness of contact tracing.”

Event-specific interventions to minimize COVID-19 transmission PNAS From the Abtract: “We center our discussion on what we call ‘event R,’ or R, namely the expected number of newly infected individuals at an event due to the attendance of a single infected individual.” In essence, an algo for planners.

Test sensitivity is secondary to frequency and turnaround time for COVID-19 screening Science. From the Abstract: “These results demonstrate that effective screening depends largely on frequency of testing and the speed of reporting, and is only marginally improved by high test sensitivity.”

It thought itself very successful in the beginning mainly because it underestimated and underpriced risk. After a decade or so it discovered that it hadn’t really understood what it was doing and began taking on large losses, after which it cut back sharply.

How to ‘disappear’ on Happiness Avenue in Beijing BBC

How climate change, lack of insurance, push farmers out of agribusiness The Rappler

Why the Arab Spring Failed Jacobin

For 15 Years Sweden Thought Enemy Submarines Were Invading Its Territory. It Turned Out To Be Herring Farts IFLScience

Brexit stems from a civil war in capitalism – we are all just collateral damage George Monbiot, Guardian (PD).

Initial Batch Of COVID-19 Vaccines Will Go To States Based On Population, Not Risk NPR

Pompeo spells out the new normal: All criticism of Israel is ‘antisemitic’ Middle East Eye

Joe Biden Is Filling His Cabinet With Pro-War Hawks Jacobin

Biden Has the Team Obama Always Wanted Foreign Policy. Read all the way to the end.

Biden tamps down idea of Sanders or Warren in administration Politico

How do we avoid future authoritarians? Winning back the working class is key Bernie Sanders, Guardian. The Guardian, not WaPo or the Times?

What Did the Democrats Win? Michael Tomasky, NYRB (Re Silc).

America and Britain are the Big Losers on the World Stage Patrick Coburn, Counterpunch

The New Money Trust: How Large Money Managers Control Our Economy and What We Can Do About It American Economic Liberties Project 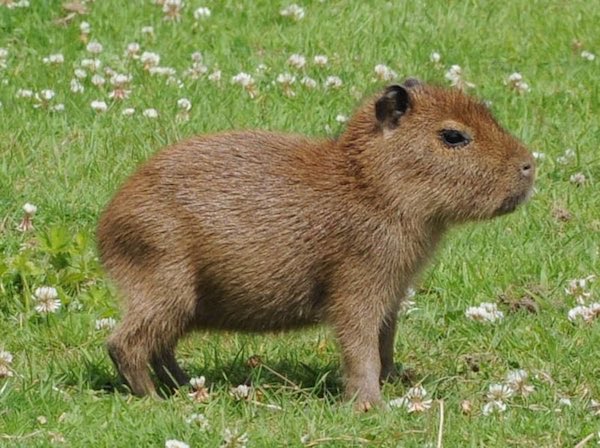