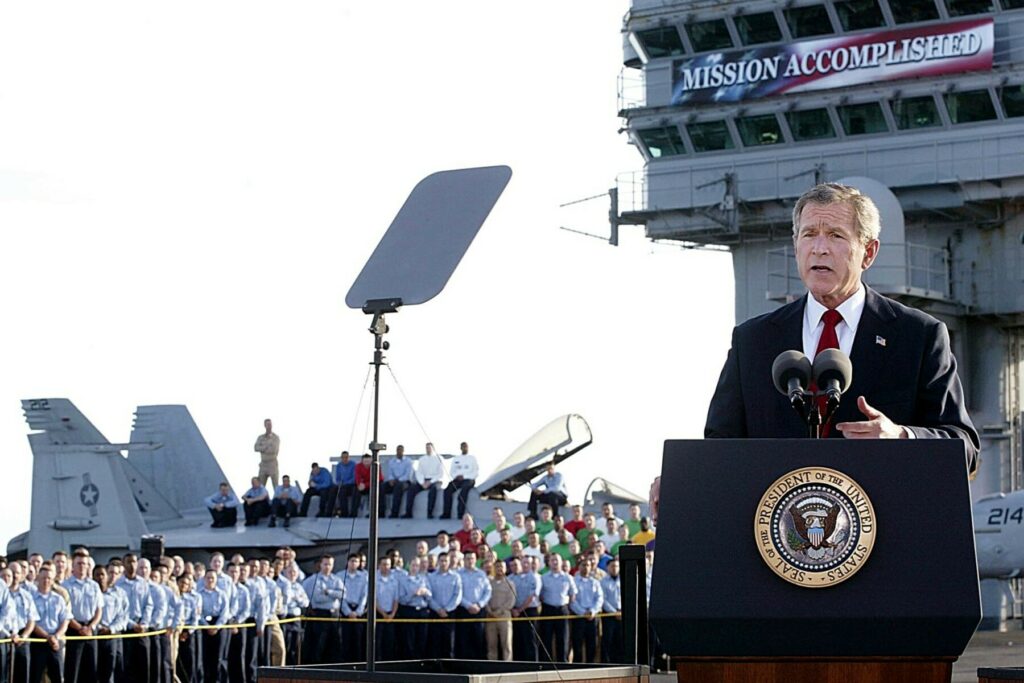 Bush Doesn’t Look Better in Hindsight. He Looks Worse.
The forty-third president set the stage for a world-historical dimwit to run the nation into the ground.
Bruce Bartlett TNR November 23, 2020

I always thought George W. Bush wasn’t very bright and never liked him. I’ve never met him, but everyone I know who knew him thought he was a lightweight. However, when Bush was first elected, I was still a good conservative and a loyal Republican, so I sucked it up and avoided criticizing him, focusing my attention on those things Bush said and did with which I happened to agree. I had many friends in the administration and worked with them to develop policies I could support with columns, interviews, and think-tank studies.

In the first few years of the Bush 43 administration, I managed to stay inside the Republican tent, pissing out instead of in. But I was always bothered by my failure to ascertain where, exactly, the president was getting his ideas. I had worked for both Ronald Reagan and George H.W. Bush and had a pretty clear idea of where their ideas came from, but W. remained an enigma to me four years after his election.

Early in 2004, the Pulitzer Prize–winning journalist Ron Suskind published The Price of Loyalty, a book about the Bush presidency that was based heavily on extensive interviews with Paul O’Neill, his Treasury secretary. I was particularly struck by O’Neill’s description of attending meetings with Bush. “The president is like a blind man in a roomful of deaf people,” O’Neill said. “There is no discernible connection.”

In those days, I was writing a syndicated column and wrote one praising Suskind’s book as the most insightful yet on the Bush presidency. This led Suskind to seek me out to have a long telephone conversation. We were both curious about the same question: What makes Bush tick? His ideas seemed to come to him from out of the ether, with no foundation in facts, analysis, or underlying philosophy. Yet he held these ideas very strongly, unwilling to be shaken from them no matter how much evidence was presented against them.

Suskind and I were very puzzled by this phenomenon, and over the next several months we continued to talk about it, never figuring out the Bush conundrum. Suskind wrote an article for The New York Times Magazine, just before the election in 2004, summarizing our conversations. He quoted me saying that Bush’s faith was the key to understanding him: He had a “weird, Messianic idea of what he thinks God has told him to do,” I said in the article.

Continuing, I told Suskind, “This is why he dispenses with people who confront him with inconvenient facts. He truly believes he’s on a mission from God. Absolute faith like that overwhelms a need for analysis. The whole thing about faith is to believe things for which there is no empirical evidence. But you can’t run the world on faith.”

Later in the article, Suskind summarized his own conclusions about Bush. Ironically, one of Bush’s senior advisers—probably Karl Rove or his deputy, Peter Wehner—articulated it perfectly in terms that have become iconic. Wrote Suskind:

In the summer of 2002, after I had written an article in Esquire that the White House didn’t like about Bush’s former communications director, Karen Hughes, I had a meeting with a senior adviser to Bush. He expressed the White House’s displeasure, and then he told me something that at the time I didn’t fully comprehend—but which I now believe gets to the very heart of the Bush presidency.

The aide said that guys like me were “in what we call the reality-based community,” which he defined as people who “believe that solutions emerge from your judicious study of discernible reality.” I nodded and murmured something about enlightenment principles and empiricism. He cut me off. “That’s not the way the world really works anymore,” he continued. “We’re an empire now, and when we act, we create our own reality. And while you’re studying that reality—judiciously, as you will—we’ll act again, creating other new realities, which you can study too, and that’s how things will sort out. We’re history’s actors … and you, all of you, will be left to just study what we do.”

Suskind provided further insights into Bush’s vacuousness in other forums, as well. In 2007, he posted an important memorandum sent to him by a top policy expert in the Bush White House, John DiIulio, a conservative University of Pennsylvania political scientist on leave to work on “compassionate conservatism.” DiIulio was appalled at the lack of substance in the White House policymaking process. In his memo to Suskind, DiIulio said:

In eight months, I heard many, many staff discussions, but not three meaningful, substantive policy discussions. There were no actual policy white papers on domestic issues. There were, truth be told, only a couple of people in the West Wing who worried at all about policy substance and analysis, and they were even more overworked than the stereotypical, nonstop, 20-hour-a-day White House staff. Every modern presidency moves on the fly, but, on social policy and related issues, the lack of even basic policy knowledge, and the only casual interest in knowing more, was somewhat breathtaking—discussions by fairly senior people who meant Medicaid but were talking Medicare; near-instant shifts from discussing any actual policy pros and cons to discussing political communications, media strategy, et cetera. Even quite junior staff would sometimes hear quite senior staff pooh-pooh any need to dig deeper for pertinent information on a given issue.

DiIulio went on to say, “This gave rise to what you might call Mayberry Machiavellis—staff, senior and junior, who consistently talked and acted as if the height of political sophistication consisted in reducing every issue to its simplest, black-and-white terms for public consumption, then steering legislative initiatives or policy proposals as far right as possible. These folks have their predecessors in previous administrations (left and right, Democrat and Republican), but, in the Bush administration, they were particularly unfettered.”

DiIulio wasn’t the only academic in the Bush White House who was appalled by the lack of interest by the president—and by extension, the rest of the White House staff—in the basics of policymaking. Suskind described another example of this grim dynamic in a revealing anecdote, the truth of which I can confirm because I heard it from a source at the Council of Economic Advisers the day it occurred. It happened early in the administration, when the White House was promoting a tax rebate to stimulate the economy. As Suskind tells it:

One morning in 2001, one of President Bush’s most senior economic advisers walked into the Oval Office for a meeting with the president. The day before, the adviser had learned that the president had decided to send out tax-rebate checks to stimulate the faltering economy. Concerned about deficits and the dubious stimulatory effect of such rebates, he had called the president’s chief of staff, Andy Card, to ask for the audience, and the meeting had been set.

As the man took his seat in the wing chair next to the president’s desk, he began to explain his problem with the president’s decision. The fact of the matter was that in this area of policy, this adviser was one of the experts, really top-drawer, and had been instrumental in devising some of the very language now used to discuss these concepts. He was convinced, he told Bush, that the president’s position would soon enough be seen as “bad policy.”

This, it seems, was the wrong thing to say to the president.

According to senior administration officials who learned of the encounter soon after it happened, President Bush looked at the man. “I don’t ever want to hear you use those words in my presence again,” he said.

“Bad policy,” President Bush said. “If I decide to do it, by definition it’s good policy. I thought you got that.”

The adviser was dismissed. The meeting was over.

The adviser was Glenn Hubbard, chairman of the CEA, on leave as a professor of economics at Columbia University. He and I worked together at the Treasury Department during Bush’s father’s administration, so I am very familiar with Glenn’s scholarly research. What he told Bush wasn’t remotely controversial as a matter of mainstream or even conservative economic opinion. But Bush knew better—on what basis, who knows?—and didn’t appreciate being contradicted by a mere staff person, even if that staffer was a top expert in his field.

As many books have recounted, Bush’s dismissal of expert opinion was at the core of the Iraq imbroglio. This fact was brought home to me a year or so after Bush left office when I ran into a woman I knew from graduate school. She had spent decades working in the government on arms control and was a strong Republican. She confided to me that her office had sent many reports to the Oval Office explaining that there were no weapons of mass destruction in Iraq, all of which were ignored. She was incredulous, but it didn’t appear to have affected her party loyalty.

My frustrations at Bush’s apostacy—from a conservative point of view—led me to write a book on the subject, Impostor: How George W. Bush Bankrupted America and Betrayed the Reagan Legacy, published in 2006. A key theme of the book was that Bush didn’t seem to understand what he was doing or why—and this was well before his incompetent response to Hurricane Katrina undoubtedly raised its death toll.

Bush’s mangling of the English language was legendary, making people doubt his intelligence from the day he appeared on the national scene. After his departure from office, foreign officials who had worked with him expressed astonishment at his ignorance and lack of intelligence. In 2010, Uwe-Karsten Heye, former spokesman for German Chancellor Gerhard Schröder, told an interviewer, “We noticed that the intellectual level of the [U.S. president] was exceedingly limited. As such, it was difficult for us to communicate with him.”

I bring all of this up, of course, because of Donald Trump, whose stupidity I have discussed previously and who is killing thousands of Americans weekly from his incompetent handling of the coronavirus. (That is, deaths over and above those that would have occurred under competent leadership, such as that in Germany.)

During the 2016 campaign, Trump was relentless in his attacks on our forty-third president, calling him “a disaster” and blaming him for the 9/11 attacks. In a historic case of the pot calling the kettle black, Trump even questioned Bush’s intelligence. He “didn’t have the IQ,” Trump said. While these attacks served the purpose of disparaging Bush’s brother Jeb, who was competing with Trump for the 2016 GOP presidential nomination, they weren’t new. Back in 2007, while Bush was still in office, Trump said, “He’s been a terrible president.” (Bush returned the favor in 2018, saying Trump’s tour in office “sorta makes me look pretty good, doesn’t it?”)

Space prevents a further discussion of similarities between Bush and Trump, but there is no question in my mind that Bush bent the curve in the Republican Party away from intelligence and a reasonably firm grasp of the details of policy. Bush led directly to the imbecile Sarah Palin’s nomination to the 2008 GOP ticket—to Senator John McCain’s everlasting disgrace—and thence to Trump. Now the question confronting the GOP is whether the curve will ever turn upward again.