“Half of the people lie with their lips; the other half with their tears.” ―Nassim Nicholas Taleb

By Lambert Strether of Corrente

Continuing on with our circuitous slog through volume one of Obama’s third autobiography, I want to take a look at two incidents on the 2008 campaign trail: The first, where Obama throws his pastor, Reverend Jeremiah Wright, under the bus; the second, which follows hard upon, where Obama explains how and why flyover “clings” to guns and religion. (Because I only have a hard cover copy of the book, and not a PDF, I can’t copy and paste the passages I am about to quote; I photograph them with my iPad, and then highlighted the images. So please forgive the awkward angles and uneven text color.)

The trajectory of the relation between Reverend Jeremiah Wright (pastor) and Barack Obama (parishioner) is neatly set forth in the Index; the final index entry is “denunciation.” 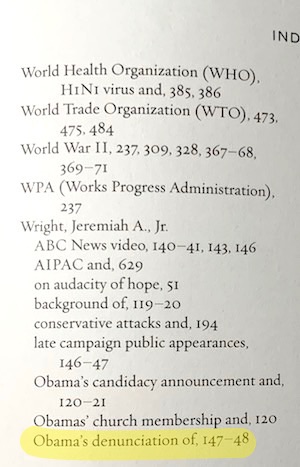 Reverend Wright was pastor of Trinity United Church of Christ, and Obama says he come to know write during his “organizing days.” He doesn’t say when, exactly, he and Michelle became Wright’s parishioners; he does say their attendance was “spotty.” He was also dubious about Wright’s sermons: 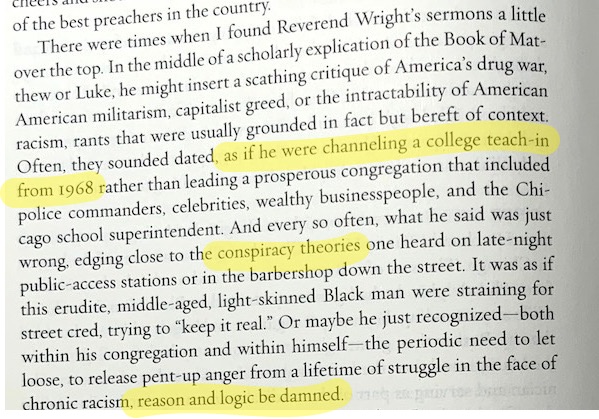 Obama had, however, asked Wright to lead the crowd in prayer when he announced his candidacy in Springfield. Until a reporter from Rolling Stone spoiled the mood by going to Trinity to hear one of Wright’s sermons:

(“Axe” is David Axelrod, chief strategist for Obama’s campaign and later Senior Advisor to the President. These little touches of authenticity really make the book worth reading.) The fastidious Obama is naturally aghast at Wright’s “incendiary language” — though it’s certainly odd that he and “Axe” had never considered Wright oppo material, given how much he had already benefited from it — and immediately throws Wright under the bus: 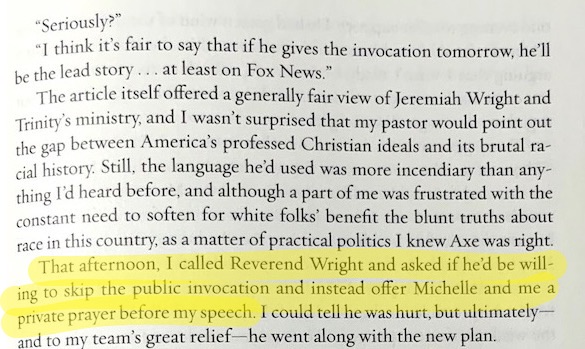 A moment’s pause for Obama to muse: 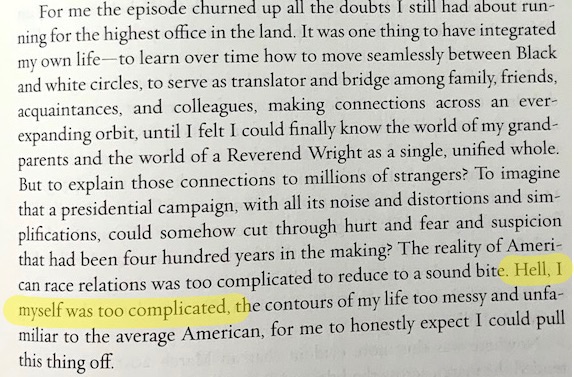 (“I myself was too complicated.”) Fire extinguished, at least until later in the campaign when ABC’s Good Morning America puts together a video of Wright clips, and the flamage bursts forth with renewed fury: 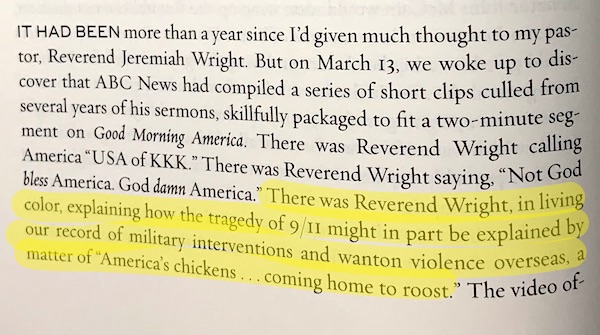 (“Living color”). “9/11 might in part be explained by our record of military interventions.” MR SUBLIMINAL Axe, the man will say anything.. Obama, once again, denounces Wright, but it does no good:

So Obama decides — this is the supreme West Wing moment, although to be fair, everything up to this point has been pretty West Wing, too — that he needs to make a speech:

Oddly, Obama here muses on what he would “argue,” without at any point chronicling what he actually said:

The speech goes over boffo. “Marty” (Martin Nesbit, now in private equity, then Obama’s campaign treasurer), in a neat bit of foreshadowing, sheds a tear: 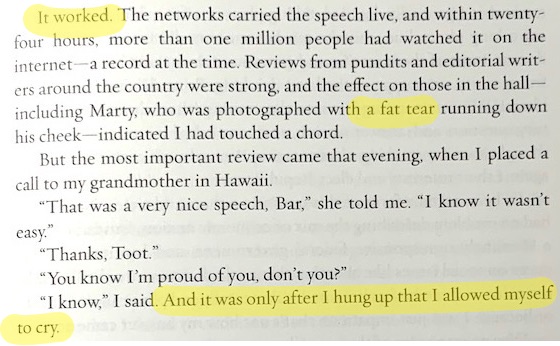 (“Toots” is Obama’s grandmother, a Vice President at the Bank of Hawaii.) And then Obama himself cries (over a speech, remember, whose content he does not actually describe).

But why? Why is Obama crying? With joy, for having salvaged his Presidential campaign? With relief, for having patched the “blown through” “hull” of his campaign? For the sadness of throwing his pastor under the bus, and then driving over the body? For the tragedy of it all, having sacrificed the man he once was on the altar of the office he hoped to hold? With happiness, for having lived up to his banker grandmother’s expectations? We’ll never know, because Obama doesn’t say. (We don’t know why he was holding back tears, either, or for how long.)

So, Obama wept[1], for unknown reasons. Let’s turn now to our second incident, which takes place in the Pennsylvania primary. Again, the index is telling: 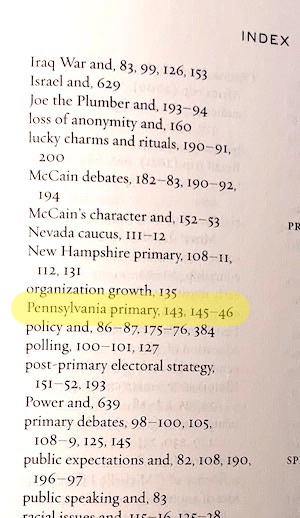 (The “voting against their interests” is, of course, a well-known liberal trope, unpacked by Thomas Frank in What’s the Matter with Kansas?) And Obama muffs the answer:

Now, to be fair to Obama, this is the first of a bipartisan series of stumbles on the issue of working class representation in political life: Obama’s “bitter”/”cling to” is Romney’s 47% is Clinton’s “basket of deplorables“; this isn’t a problem for Obama alone, but for the entire political class (with very rare exceptions).

That said, my reaction to Obama’s remarks was and is incandescent fury. We had just gone through the Reverend Wright saga, where Obama was allowed to perform a highly visible, deeply personal reflection on religion, race, politics and his own agency within those cross-currents. Leaving aside Obama’s reframing of the effects of deindustrialization as “anti-trade sentiment,” he denies these working class people their agency. Obama is allowed space and time for personal reflection on religion, almost as if he were a public intellectual; “bitter” working class people “cling to” religion, presumably because they know nothing better, and have no ability to self-reflect. Obama says: “I myself was too complicated”. Can anybody imagine Obama, or indeed any member of the Obama Alumni Association, thinking or saying that working class people have complex internal lives?

Finally, Obama broods on how misundertood he is: Oh, Obama’s instinct is to censor the press:

Of course, Obama’s 2008 view of the press has become, in the main, the truth in 2020. The press probably would check with Obama now — as if the tape didn’t speak for itself — and the press and the politicicians are both wear the same jerseys, with reporting taking a back seat to team spirit.

Hopefully in the near future I can move on to Obama’s various policy debacles — ObamaCare doesn’t really get rolling until 2013, so we have to wait on Volume Two for that — but these two incidents, coming so close together in 2008, really shaped my picture of Obama the man, and this book, and its careful omissions and erasures, repaints that picture in brighter colors. Weeping for reasons he cannot or will not explain; denying working class people the agency he arrogates to himself, and luxuriates in. I guess I’m not sure that Taleb’s categories are mutually exclusive and collectively exhaustive.

[1] “It was only after I hung up that I allowed myself to cry” is not the shortest sentence in Promised Land.