Yves here. Not surprisingly, young workers have been hit even harder than the population as a whole by Covid. The Economic Policy Institute filled in the picture for the US as of October:

Across the United States, millions of workers of all ages suffered job losses in the coronavirus-driven recession, but the economic impact on young workers has been even more intense. Not only have many young people in this country faced the harsh reality of returning to school without in-person classes at their colleges and high schools, the job prospects for those seeking employment have been particularly bleak. Historically, young people are disproportionately disadvantaged in many ways during economic downturns, but this recession has been particularly acute given the sectors of the economy that were hit the hardest. Furthermore, many have been all but blocked from receiving jobless benefits even with meaningful expansions to the unemployment insurance system.

This paper investigates several important questions regarding young workers, defined as workers ages 16 to 24 years old. Our main findings of the experience of these workers in the labor market are summarized below.

An additional disheartening fact: early career jobs have a big impact on lifetime earnings. So early unemployment/sporadic employment has a big individual and societal cost.

By Monika Grzegorczyk, Research Intern at Bruegel who previously worked as a Junior Economist at OECD and Guntram B. Wolff. Director of Bruegel. Originally published at Bruegel

Youth unemployment increased dramatically in several European Union countries during the Global Financial Crisis. It took several years before youth unemployment rates came down to, or fell below, pre-crisis levels. Even by 2019, this had not been achieved in all EU countries.

The COVID-19 pandemic is now posing the same threat: younger generations are facing a harsher labour market than older generations.

source: Bruegel based on Eurostat

Figure 1 shows unemployment in EU countries for workers aged 15-24 and those aged 55-64. Youth unemployment increased during the second quarter of 2020, while unemployment remained almost unchanged compare to the year before for the older cohort (we did not find a significant difference when adjusting youth unemployment for gender; see Fig. 3 in the annex).

Figure 2: Workers and jobseekers in the Europe (% point change compared to previous year

Figure 2 shows changes in the EU employment and activity rate (a measure of success of an economy in engaging the population in the labour force) for the two cohorts. It shows data on those in employment and actively seeking work. For people aged over 55, the increase in the rate each year has been consistently high, with an overall increase in the employment rate of more than 15 percentage points over the last decade. The pandemic has changed this positive upward trend, but only to a limited degree so far. This is in stark contrast to the young cohort, for whom the increase in the employment rate was much more moderate pre-pandemic after the Global Financial Crisis, quickly turning substantially negative when COVID-19 hit.

A glance at labour market slack data, or the shortfall between the work desired by workers and the volume of work available, does not provide any cause for optimism.

Table 1 shows that young active jobseekers are two or three times less likely than those aged over 55 to be able to find a job. The professional experience of older people plays a crucial role in this disparity, which makes tackling unemployment among young people all the more pressing in times of rising unemployment.

Moreover, Table 2 shows a substantial increase in the proportion of under-25s who are not even seeking work, even though they are available to work (unemployment figures only include those who are actively seeking work: the numbers in Table 2 include discouraged jobseekers and persons prevented from looking for work due to personal or family circumstances).

The Scars Left by Youth Unemployment

Youth unemployment should worry policymakers.? Beyond the immediate negative effects of unemployment on individuals and public finances, youth unemployment has been shown to have longer-term effects. The literature on the ‘scarring effect’, the effect of being young and unemployed, shows there are irreversible consequences (see for example Arulampalam, 2001; Darvas and Wolff 2016). For instance, Gianni De Fraja and Sara Lemos found that “an additional month of unemployment between ages 18 and 20 permanently lowers earnings by around 1.2% per year”. Burgess (2003) found that unemployment early in an individual’s career increases the probability of subsequent unemployment.

Schwandt (2019) showed that people who enter the labour market during a recession earn less and work more but receive less welfare support. Moreover, they are more likely to divorce, and they experience higher rates of childlessness. Furthermore, Strandh et al (2014) found that youth unemployment is significantly connected with poorer mental health. It is important to underline that periods of unemployment later in life do not appear to have the same long-term negative effects.

In summary, the labour market is much more difficult for younger people than older people. Like the last big recession, the economic fallout from the pandemic will leave many young people in Europe unemployed, with long-lasting social and economic consequences. Yet in the EU, European Commission President Ursula von der Leyen did not identify youth unemployment as a key policy concern in her state of the union address on 16 September 2020. The European Commission and national policymakers must urgently focus on supporting young people in coping with the challenging situation. Beyond supportive macroeconomic policies, they must target funding towards the hiring of young people and training measures. 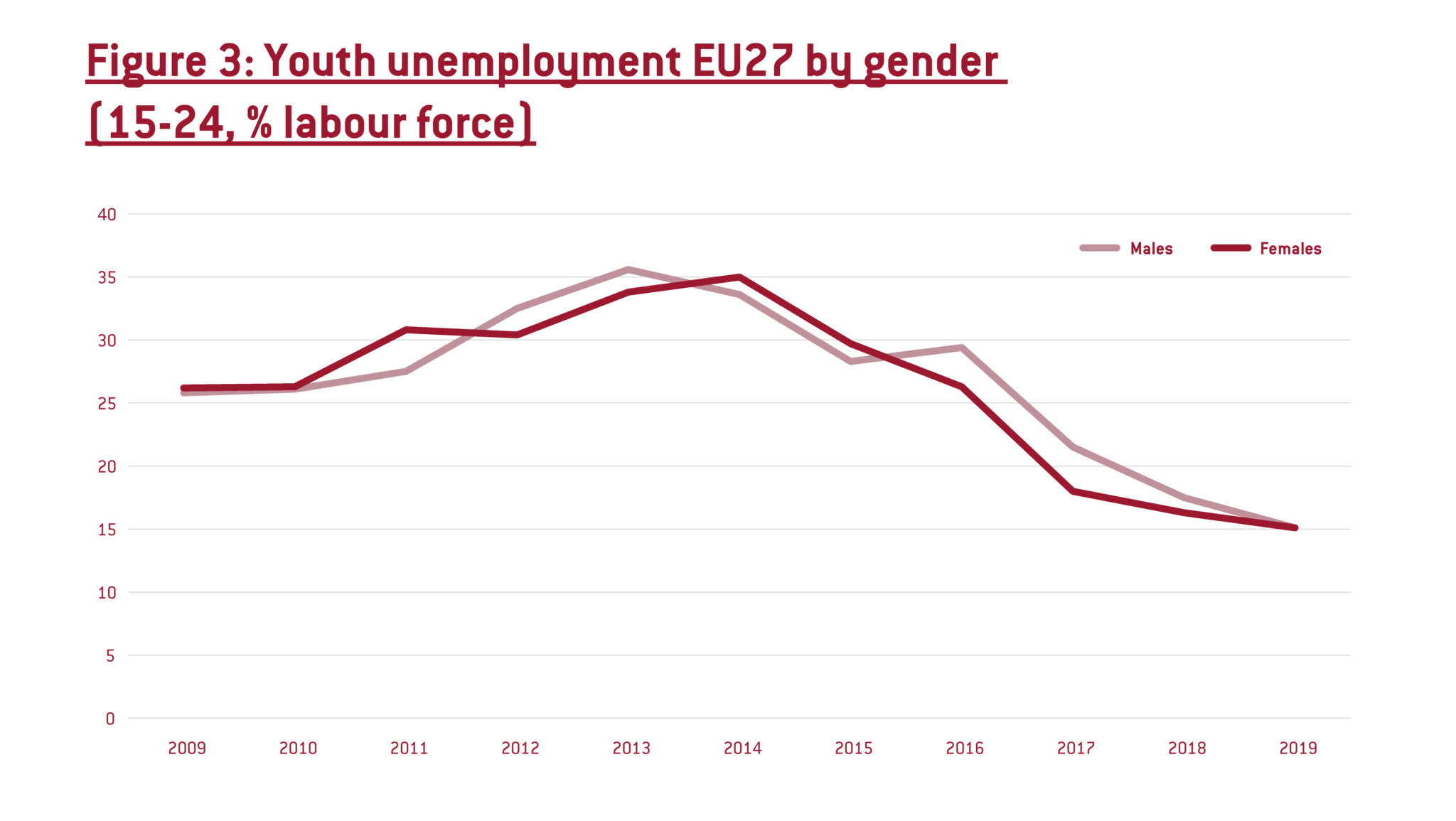